Why the heck do I do this?

After talking with Kristina about finishing photo projects on last month’s podcast on Reflections, I began to think of my own history with them. I think I’ve never been content with one-and-done art. Even when I spent time on other creative outlets in the past – be it writing short stories and poetry, making short films with friends, or filming and interviewing musicians – I’ve always gravitated toward series or projects. The same is true for my toy photography. I don’t just like taking one photo and then moving onto the next. Instead I prefer to take a series of photographs that are all somehow part of a larger puzzle. I tend to stray away from using repeating characters in my work – something I actually really appreciate in other artists like Joe Cowlishaw or IntangibleDandy – but what I do enjoy is grouping my shots together in a more thematic way.

Sometimes this is obvious. For example, I’m working on an entire series of LEGO Stormtroopers, each framed similarly but differing in the figure and background. Each photo is unique, but it’s clear that they’re all part of a set when you see them together.

The thrill of the chase

Shooting this way is fun for me. I love to envision an entire project from start to finish and plan out my shots. Sometimes a project requires specific subjects, and I don’t always own the pieces or figures I need. That leads to hunting them down, which can be a fun process in and of itself (especially if you’ve also got the collecting bug, like me).

There’s a certain level of romanticism that goes into each new project. I love fine-tuning the overall vision, and daydreaming about how I could print the photos or even post them in a series on social media. I can’t even tell you how many coffee table books I’ve dreamed up in my head. Then, reality kicks in. The truth is, the thrill of starting and planning a project is so strong that I often chase it. I start new projects all the time, which usually means that I don’t finish the ones I already have on my plate. 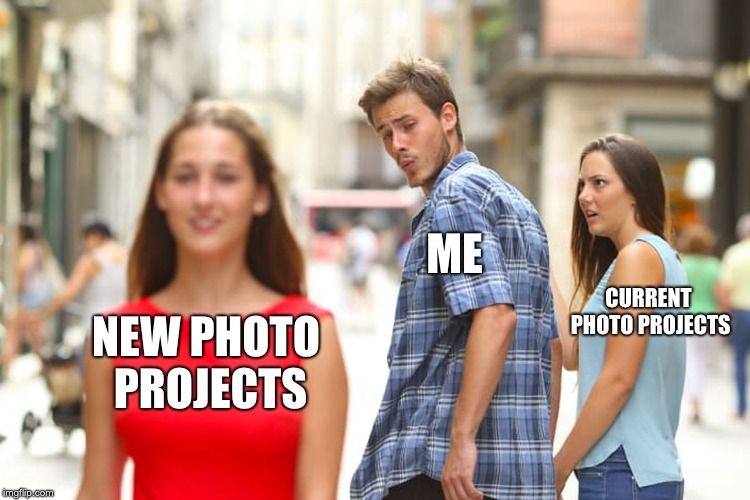 I’m always hopeful that I’ll finish them eventually. I may frequently take on new projects, but I don’t completely abandon those that I already have. Instead I put them on the back burner and revisit them if and when inspiration strikes.

Because I often push pause on projects, I also tend to not post them at all. I’ve written before about certain compulsions and anxieties I have about how and when I post my photos. Having certain shots tied to potential series makes me especially nervous to show them to the world. If I don’t have a full-fledged release plan, or enough of a project to post consistently, I’d rather hold off. Now, I’m sitting on dozens of photos, waiting for the right opportunity to present them. Hopefully it will happen eventually, because I’m really proud of some of the ideas I’ve cooked up!

I’ve taken an entire series of portraits featuring Star Wars Black Series figures, inspired by the paintings of Mike Mitchell. I have yet to post any of them.

How do you feel about photo projects? Do you finish them? Or are you like me, turning them into an ongoing process? I’d love to hear your thoughts in the comments below.