The Construction Of The Millennium Falcon

Sometimes investing in a photography prop opens doors that you couldn’t have thought of ahead of time.  A case in point: Several months ago I purchased the largest LEGO set ever released for retail sale: The Ultimate Collector Series Millennium Falcon.

At over 7500 pieces, this is a monster of a set. My original plans were to build it, and use it as the background for some LEGO photo shots.  However as I was watching some TV with my kids, I got an idea that would maximize my investment: I would make art out of the building process itself.

The idea still gives me tingles.

You see I’ve always loved the historic photos of the Titanic while it was being built in the Belfast shipyards.  So I decided that I would try to make similar photos using the Millennium Falcon set.   So I put my build on hold, went to Brick Link to get a model of a crane, and some pieces to make scaffolding, and started making plans.

Basically, I was making a project out of building a set that is a project in itself, that I would use for other photography projects.  3 projects in one!  Great value for the money!

Knowing I was going to take photos as I went along, I studied the instructions ahead of time to get ideas of places during the build where I could set up my shots. 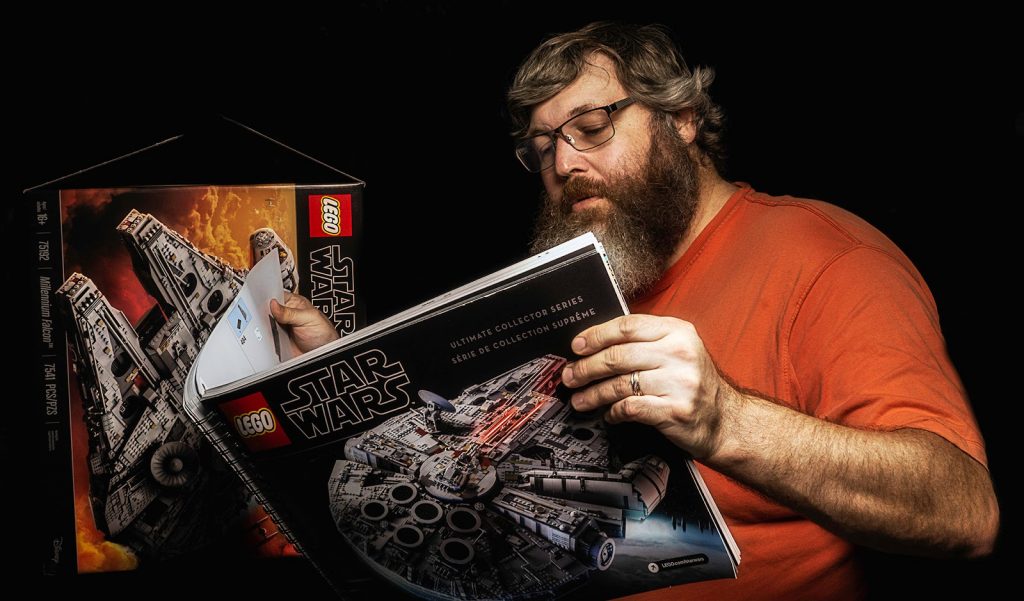 It is a huge manual, so it took some time.  Fortunately this model is build in various modules that are all connected to the central frame, so there were many places to set up shots during the build.

I started with taking this photo, of the assembling of the main frame of the Falcon, as a test. 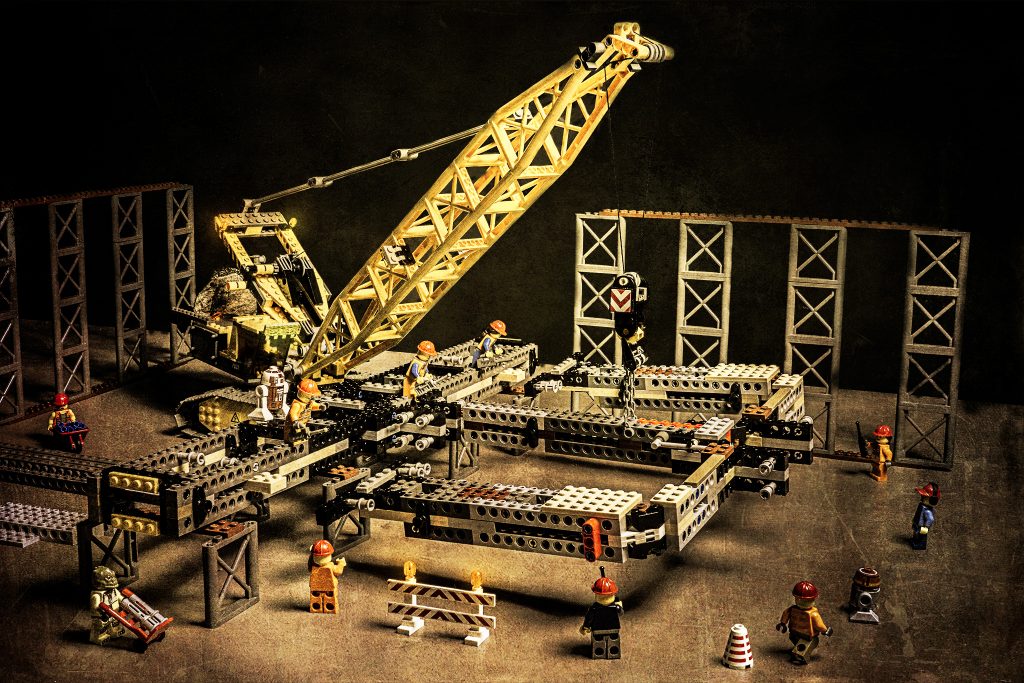 Building the main frame of the ship; my test shot.

I think it worked out well, and after post-processing has that historic look I had envisioned.  Encouraged, I kept going.

Keeping an eye on the next steps was critical, as often times I had to ignore a couple steps to get the build into a place where I could set up a photo, before going back and finishing up.

I also looked for places where I could add in some special effects.

The best part of this process was that as I built the falcon, I came up with stories about what was going on.  For example, the Dejarik board was programmed by the construction foremans nephew, who needed an after-school job, and a place to hang out. 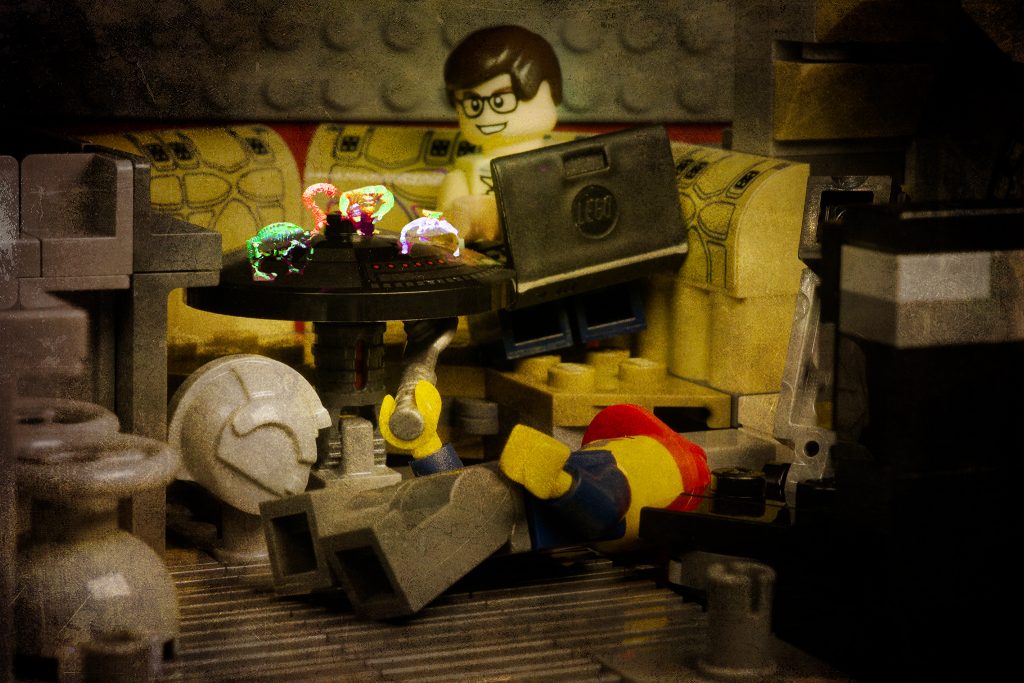 The radar installer was also hooking up free HBO. 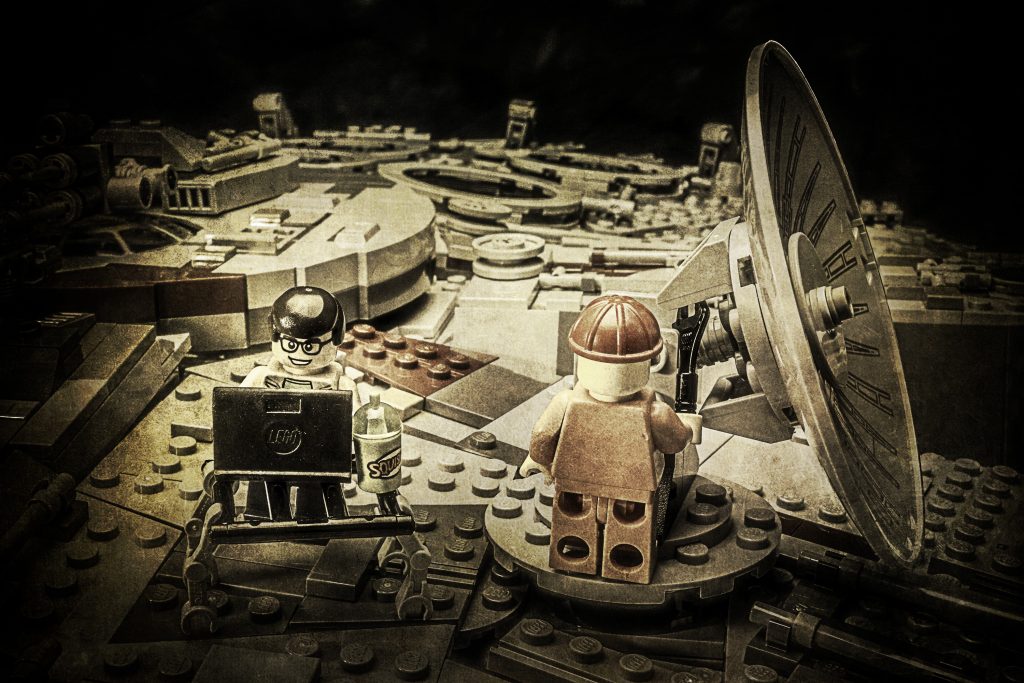 And after a while I got the idea to stage a movie shoot with the Falcon as a backdrop, a movie called Wild West Wookiee starring none other than Chewbacca. 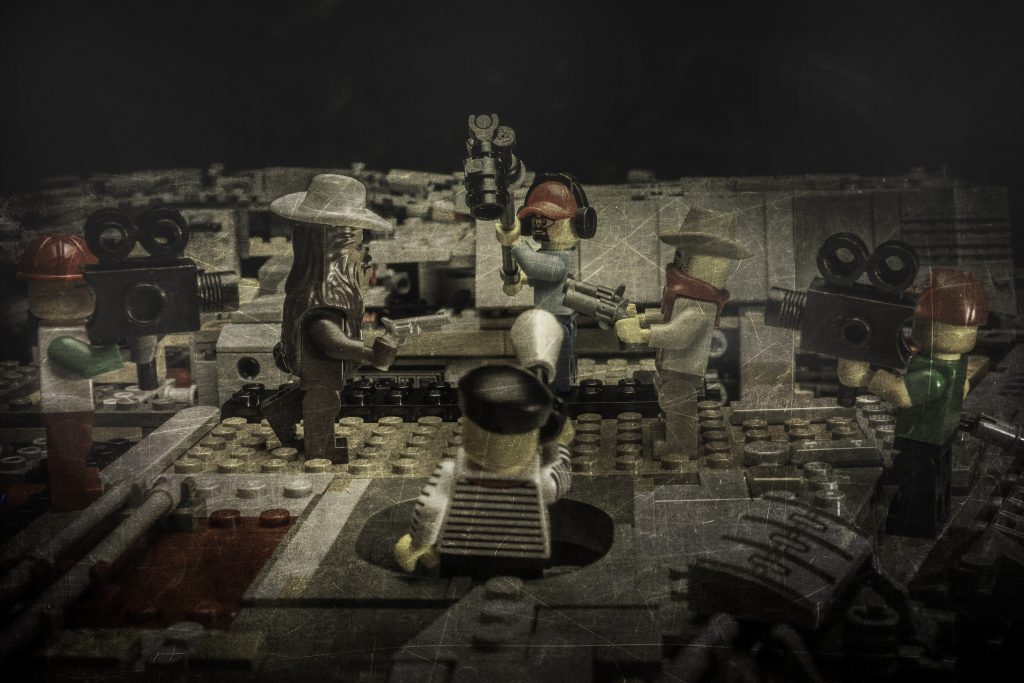 A movie made during the construction of the Millennium Falcon

This ended up being one of the most fun LEGO builds I have done in quite some time.  Making art out of it ended up being a great way to interject creativity into a task that by definition is just mindlessly following instructions.

I ended up finishing 15 photos for this project, which are all linked in a gallery below. I hope you enjoy them.

Have you ever made a project out of a LEGO build?  Let me know about it in the comments below. 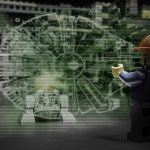 LEGO foreman looks at the blueprints for the Milennium Falcon 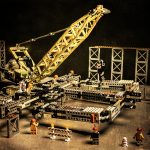 Building the main frame of the ship 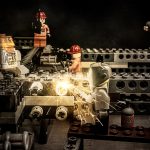 Workmen welding pieces onto the superstructure 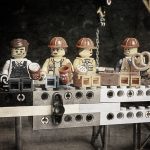 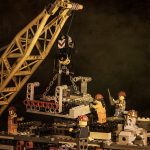 Installing habitation modules into the belly of the ship 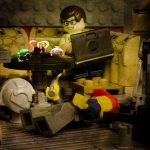 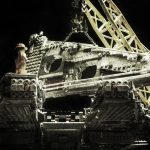 Installing the top right mandible panels of the Falcon. 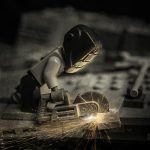 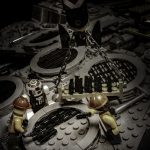 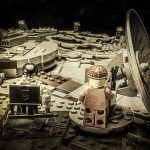 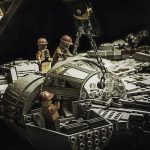 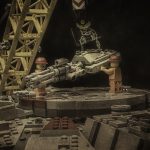 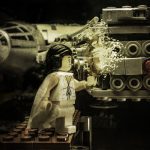 Lady christening the Millennium Falcon by breaking a bottle of champagne on the hull. 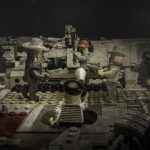 A movie made during the construction of the Millennium Falcon 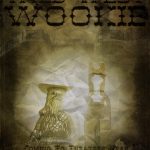