No really, what a week! In fact the last two weeks have been a ridiculous roller coaster ride capped off by Alphabet announcing that they’re pulling the plug on G+. The highest highs, followed by the lowest lows. What. A. Week.

I know for most of you, you can care less about the shuttering of the Google+ platform. If I only had a nickel for every article that mentioned how dead the platform is, I could take a nice vacation in Hawaii. But for those of us who actually spend time there, the platform has always been a bustling hive of activity. I can join interesting communities on a varieties of subjects from the most technical to the merely silly. I’ve met people on G+ who have profoundly changed my life.

Thanks for the memories

But G+ has been about more than spreading the love of toy photography near and far. It has also been an incredible journey of self discovery. There was one memorable year when I participated in three workshops lead by Shari Miller that allowed me to look deeply at my own fears, examine what was important to me and help me to begin dreaming about what was possible. All of this was discovered through the lens of my camera and a few toys. I’m forever changed by that experience. I’d like to think my experience was unique, but once you start talking to anyone who love G+, you will discover equally powerful stories.

One aspect of G+ that set it apart from other social media platforms is that the moderators, benevolent overlords or staff stuck with this product that went no where (depending on your point of view) actually knew who the most active participants are. They identified those folks and brought them together to promote both them and their work. There are countless stories on G+ where the employees tasked with G+ helped, guided and promoted talented users. Many a career has been launched by G+. And by career I mean with actual money, not just increased follower counts.

G+ has also been the home of the community associated with our blog. As a group we have shared our images, behind the scenes set-ups, asked for help and participated in multiple challenges. Friendships have grown up and our mutual respect for each other has grown through the months. It is the loss of this home that hurts the most. Im used to finding my way on new platforms, but its hard for me to ask others to follow.

G+ you’ve been very good to me and I will miss you.

Social media is for making friends

One of the highlights of my past week was a visit from Tony Tulloch. I met Tony on Google+. Without G+ we would never have met, he would never have become a toy photography and I wouldn’t be using a Sony camera. Also there would be no G+ Toy Photographers Community without Tony. (No seriously, this is the honest truth!) Tony has been that influential in my life. So when he announced that he was coming to the states for a road trip, I was thrilled I was on the itinerary.

Even though I only had Tony for 36 hours, we made the most of that time. Because Tony has a passion for airplanes  we visited the Museum of Flight and toured the Boeing Paine Field plant (Where Boeing makes the 747 and assembles the new Dreamliner). And since we also have a mutual passion for toys we went to a couple of toy stores. We even squeezed in a quick tour of the Museum of Pop Culture and saw the incredible Marvel Exhibit. Law Ruelos (Lego_Law) joined us for dinner one night, the toy stores and some Pho. We had great conversations, traded gifts, took our required sig fig group photo and generally had a good time. If you’ve ever been on a toy photography meet-up, I think you know exactly what happened: absolutely nothing and everything all at once. 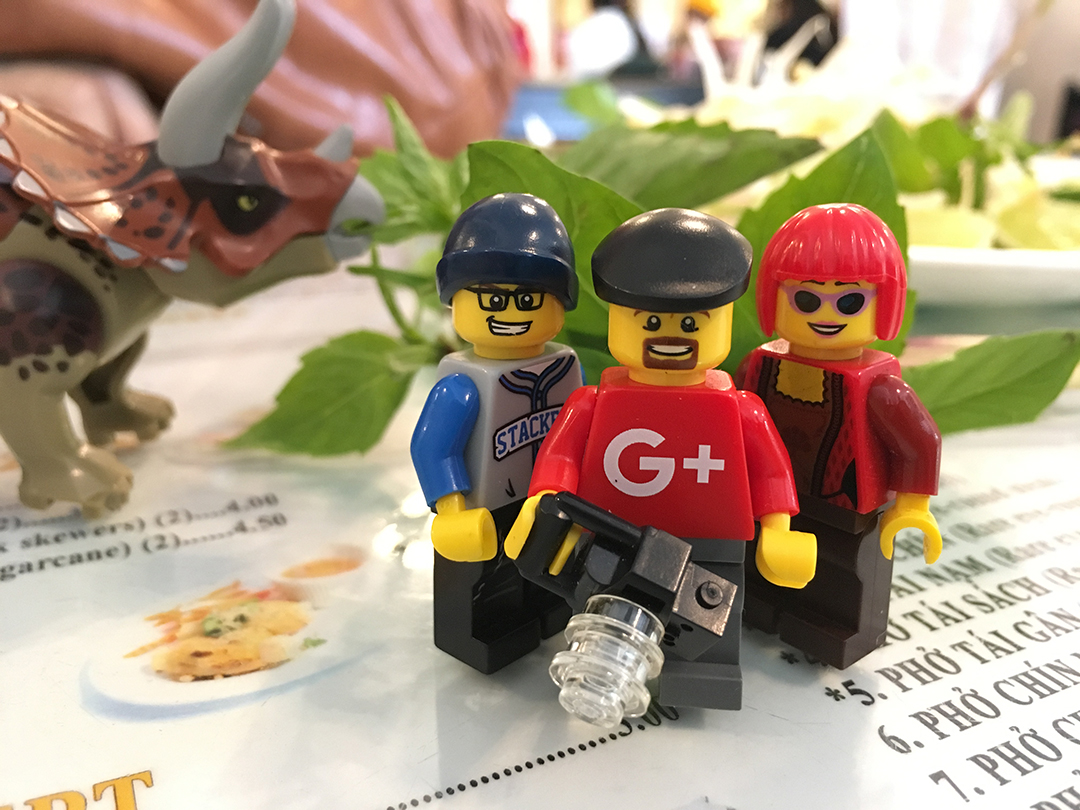 Even though Tony’s visit was only 36 hours, we had a fabulous time. G+ plus may be ending, but friendships go on forever. (If it’s not Boeing, I’m not going…right Tony?)

This past weekend I had the absolute pleasure of sharing my work at my hometown brick convention: BrickCon. I’ve attended this event multiple times, I’ve worked it for other vendors and I’ve purchased from many of the vendors. But to actually cross over and exhibit my own work…that was a heady experience.

Honestly I had no idea how my work would be received. I mean I’m not a builder, I’m a photographer! But I need not have worried, the attendees, my fellow vendors AND the general public couldn’t have been more supportive. I received so many great compliments, I heard great feedback on my imagery and I even received tips on my encaustic technique. It was pointed out that there was not ONE cat image in all the photos I exhibited. What an oversight!! 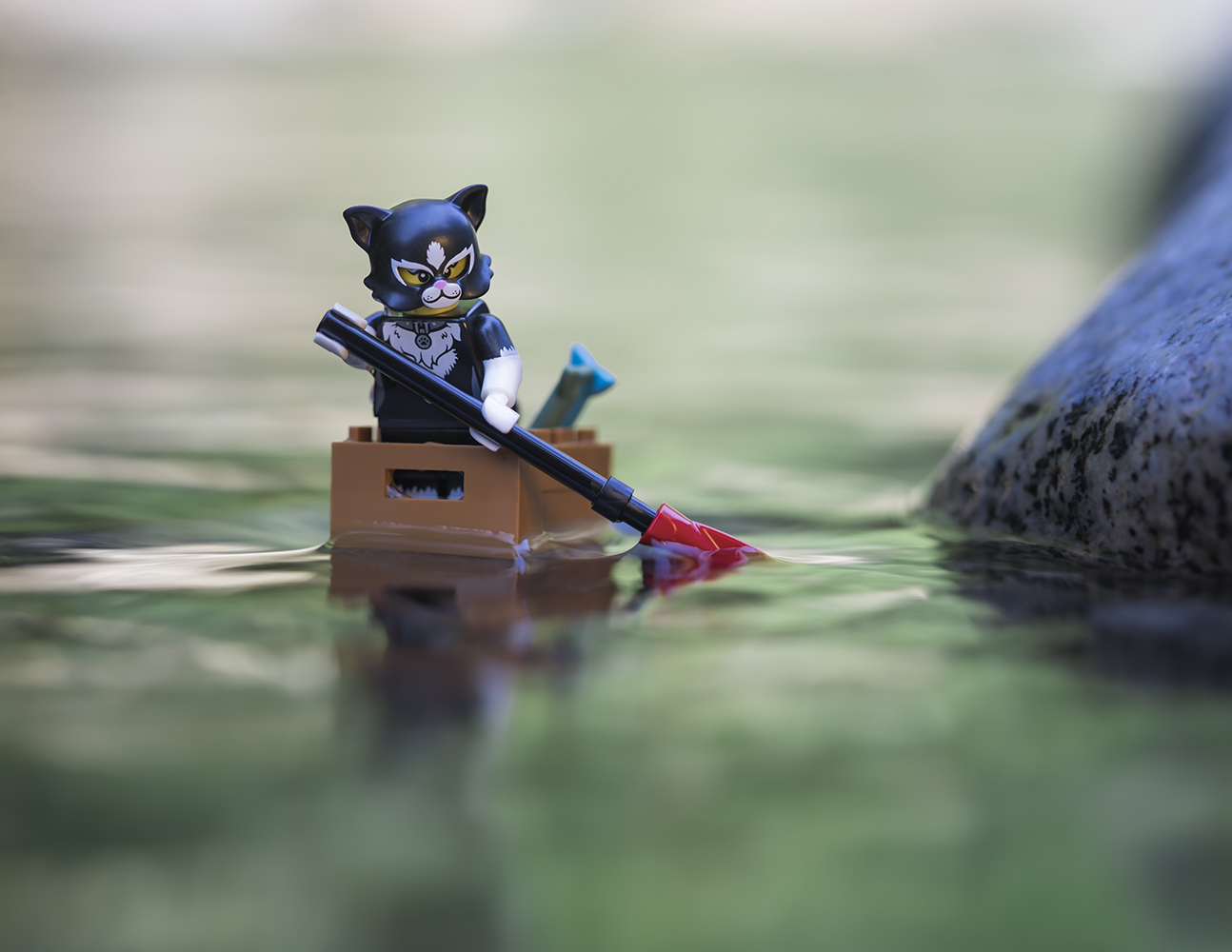 Here’s proof that I really do have images featuring cats!

Honestly there is no substitute for hearing directly from the public. It doesn’t matter if you’re trying to sell your work or simply take your work to the next level – feedback is so important! So why we put a lot of stock in social media, nothing can substitute for in person interactions.

In fact this past weekend I learned how insignificant social media is. I believe the majority of the world can care less about FB, Instagram, Twitter, G+, Flickr, Pintrist, or whatever the platform of the day is. I’ve seen no influx of followers on any of my social media platforms after a weekend when I was exposed to over 10,000 attendees. What I did see is a huge wave of traffic at my web site over the weekend. I knew this would happen and I didn’t update it before the weekend. Ugh!! I need a clone!

Sure sharing your work in person is scary. There will always be people who don’t get it. But over all, the people who stop and ask with you will always be supportive and appreciative. The image of the jaded hipster pivot and turn back to my booth after catching a glimpse out of the corner of his eye, still makes me smile. The mother and daughter who came back and purchased an image of Leia who told me they couldn’t leave without her, makes my heart glow. To create art that is relatable and creates an emotional connection…is worth the effort.

What a week! As my world continues to spin out of control I’ve been taking deep breaths trying to remember that change is inevitable. Sure G+ is closing, but the community is strong and we will rebuild somewhere else. I know there are big questions as to what we will do with our G+ Community. Rest assured I’m actively working with the G+ Moderators to find both a temporary and permanent solution. As soon as we know what we’re doing, we will let everyone know. Change is inevitable and we will find our way.

One of the many smaller highlights of the past week was that The Women’s Brick Initiative received a huge vote of confidence over the weekend (more on this as it develops). While this won’t effect what we’re doing, its nice to know we’re on the right track. Ands as far as social media is concerned, I still enjoy meeting new people. For my own social needs I’ve joined the Diaspora. I’m currently on the Pluspora pod, but whatever pod you sign up on, you can find me using the #toyphotography hash tag. If you decide to join this community owned social media effort, feel free to add me to your Aspects.

Mia McFurry returns from the social media wars. Although a little battered, she’s in good spirits. She may have lost an eye in an earlier skirmish, she gained a loyal friend: Jakob. Keep an eye out for these two as they explore a world beyond G+. (a huge thank you to Tony Tulloch for the ridiculously extravagant gift of an Olympus Zuiko lens which is now my favorite lens! And thank you to the talented Dennis Taylor who helped Tony bring his idea to life. All hail my talented friends! xx)

Change is inevitable. But before I move on, I want to take stock of what has been. I want to honor the amazing experience G+ has been. I’m thankful for all the experiences and lessons that I have enjoyed through this amazing platform. I know that inevitably all good things must come to an end, including G+. A huge thank you to all my social media friends who reached out to see how I’m doing. Now thats friendship!

What a week! I just hope that next week isn’t this exciting.

If you’re interested in keeping up with all things Toy Photographers related you should really subscribe to our newsletter. You will be the first to know where we land out community, you will be kept up on news not fit to print on the blog and you will be alerted to all upcoming toy photo safaris.