Fair Use in Toy Photography

Fair Use in toy photography is a concept that doesn’t ever go away. In fact it is more relevant now than ever before. With more and more toy photographers selling their work both on and off line, it would be nice to find out where the big boys fall when it comes to Fair Use.

If you’re not familiar with the previous conversation, let me bring you up to speed. The following is an excerpt from a blog post originally published May, 2016. At the end of the post is the million dollar question.

When you photograph someone else’s intellectual property, and by this I’m referring to licensed toys, the issue of fair use is not an abstract concept. As Paul pointed out in an earlier post, we toy photographers work within an admittedly grey area. It’s hard to know where the line is drawn between the artist and Big Inc. when it comes to the idea of ‘fair use’.

If you’re one of the many toy photographers who would like to be able to pursue some monetary gain from your amazing photos, this issue will eventually become problematic for you. I think most of us are pretty realistic that selling toy photography is not some get rich quick scheme, so the idea that we have to fight over a few dollars, pounds, or euros with Big Inc. is discouraging. But even knowing that this is the case, the idea of making a little extra money on the side to help offset the inevitable toy purchases we’re always making is appealing.

I’ve seen many toy photographers list their work on Redbubble, Deviant Art and Society6 as an easy way to make their images available for sale. While this is admittedly a convenient way to sell your work because all you do is upload your photos, set your prices and sit back and watch the money flow in (OK maybe it’s only a trickle), it also makes you an easy target for the intellectual property lawyers and the bots who work for them. I only have to look to my friend Paul (aka Bricksailboat) and his multiple take down notices, to see how there is no rhyme or reason to whose images are removed from these third party marketplaces and whose aren’t. 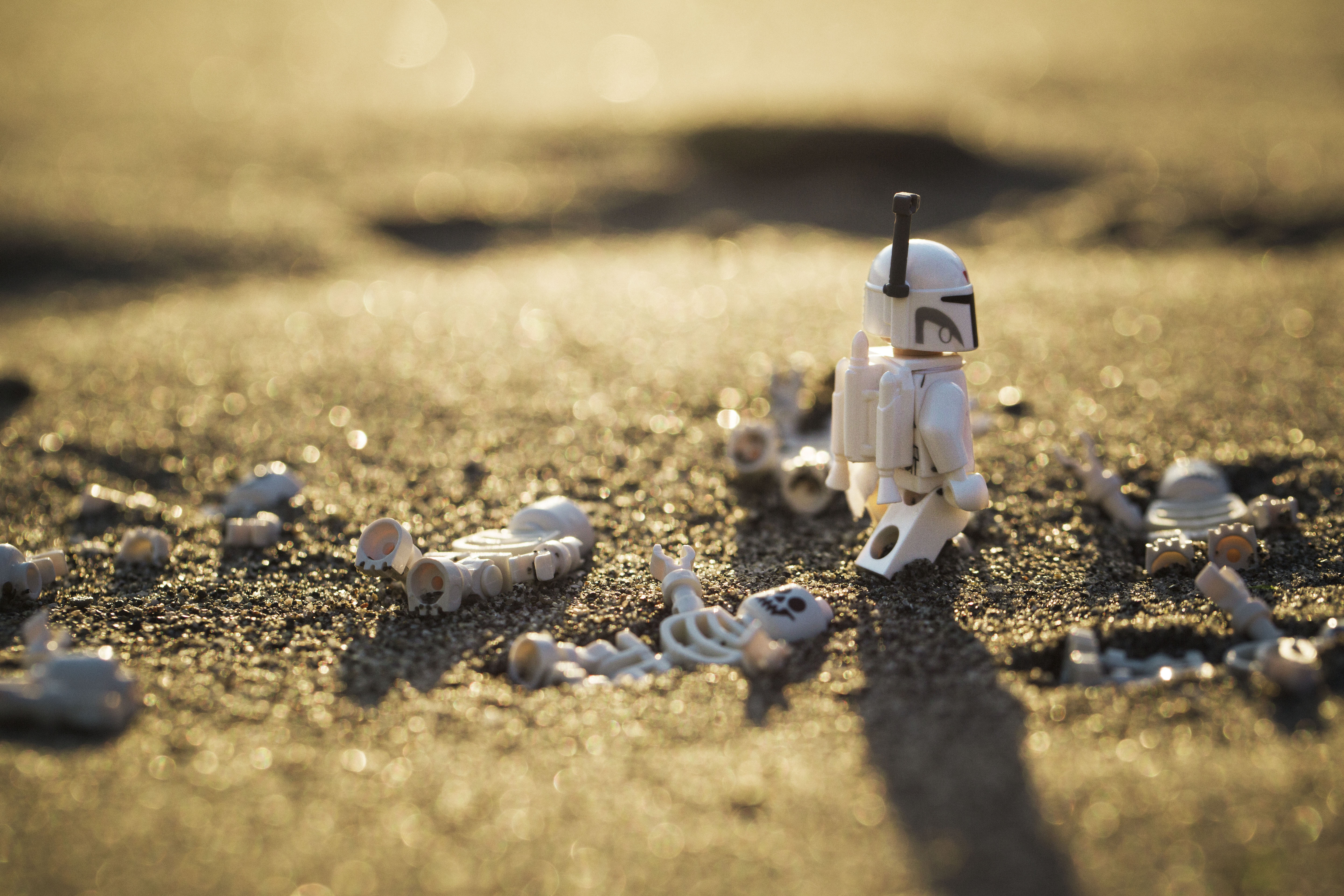 Who Owns the Intellectual Property?

Normally I would say, “Gee you asked for it. You’re knowingly playing  with someone else’s intellectual property. Of course you’re putting yourself in the cross hairs of the corporate law team.” But what happens when the majority of your favorite toy line (I’m looking at you LEGO) is made up of sets based on the intellectual property from other corporations (i.e. Star Wars, Disney Princess, TMNT, Back to the Future, DC Super Heroes, Scooby Doo, The Simpsons, Ferrari, etc…) or they’ve licensed their own original property to another corporate entity; for example, Ninjago licensed to Warner Brothers. It doesn’t seem like there is much left that doesn’t come under some lawyer’s watchful eye.

Who can fight a ‘take down’ letter from a corporate entity delivered by another corporate entity? The layer of lawyers, who are ‘simply doing their job,’ is so thick it’s impenetrable, overwhelming and far too costly to fight for the independent artist. In fact, I’m pretty sure that’s what they’re counting on.

As in independent artist, I’m nearly powerless because I’m working alone. And what’s worse, I’m not even a part of the conversation for artistic rights.

Sleeping with the enemy

But life gets even more twisted for toy photographers when the toy companies reach out to us and use us to sell their products. If you’ve been paying attention, I’m sure you’ve seen Hasbro utilize a few prominent toy photographers to promote their toys. ThreeA is another toy company that has often used great toy photography created by independent artists in their social media campaigns. Maybe these artists are well compensated, but my instincts tell me they probably aren’t; flattery and a few free toys will get a corporate marketing team father than you can imagine.

I certainly don’t begrudge any artist the opportunities afforded them working with a large corporation, we certainly jumped at the chance when it was offered to us to align ourselves with The LEGO Group. What I object to is that Big Inc holds all the cards in the current paradigm. How is each individual artist going to be able to afford a lawyer to tell Big Inc. that they can stuff it when the next take down notice arrives in your e-mail in-box?

Much of the Fair Play and ownership rights issue revolves around whether the artistic work is Transformative. I do believe that in many cases that as artist we do take those little bits of plastic made in China  and create transformative work; and by doing so we own it.

I’m pretty sure LEGO never intended their mini figures to be liberated from their plastic universe like they are in my world. Or that Ninjas would take over a sailboat and then travel by camel across the United States like they did in the world created by Bricksailboat.  Are Storm Troopers wearing Barbie style clothes and kayaking in Scotland what George Lucas envisioned when he created them in 1977?  If we have to create work that is artistically transformative to own it, where is that line? How much transformation is enough? Of course if you’re recreating each Star Wars movie frame by frame using LEGO, I think we can all agree that would not be considered transformative. 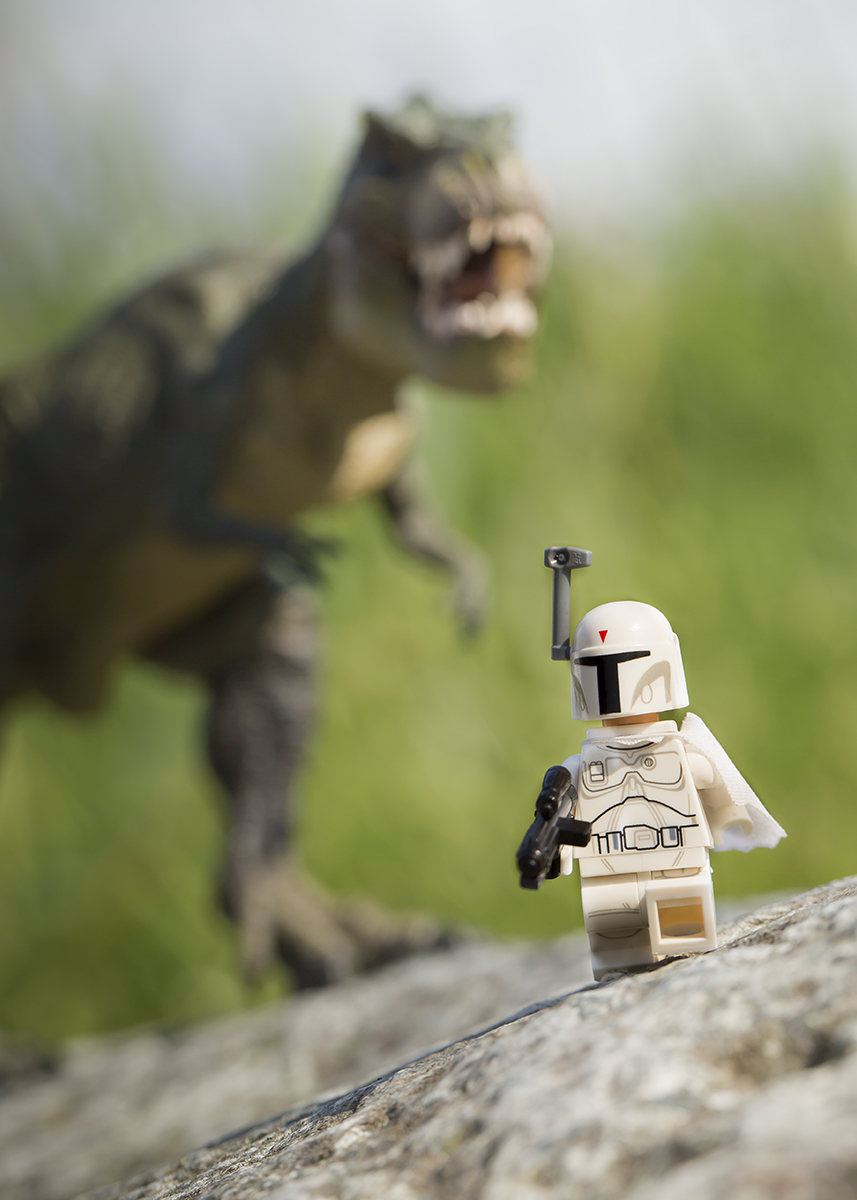 Up to now I’ve made a conscious decision to only sell my work independently. I may be missing out on some amazing pay out by not going the mass produced route, but this way I control the conversation and more importantly I control the money. I’m not the only toy photographer pursuing this route. And as toy photography becomes more mainstream, it will be harder for the large toy companies and intellectual property owners to turn a blind eye.

I have no idea how to force this conversation and ultimately its clarification. Since our relationship with our own corporate overlord is a delicate balance, by pushing this issue I certainly run the risk of a prematurely ending of our partnership. But if we do push a few buttons, at  least we would have an answer to the million dollar question of what constitutes fair use in the world of toy photography. Personally, I think we need to be asking these questions as loud as we can, because I’m afraid that if we don’t stand up for ourselves Big Inc is going to own everything, including us.

If you could ask a lawyer at The LEGO Group about Fair Use or how they feel about toy photographers, what would you ask?