In the Star Wars Universe, the walkers are among the most unique and interesting vehicles. The Last Jedi gave us an updated version of the iconic AT-AT walker from Empire Strikes Back in the form of the Heavy Assault Walker.  In classic form, LEGO has brought this new walker to life. I couldn’t wait to get my hands on it.

This is a review of the First Order Heavy Assault Walker LEGO set.  As always I’ll cover the build, the playability, and most importantly for the readers of this blog, the photograph-ability of the model.

This set clocks in at an impressive 1,376 pieces.  When built it stands over 13″ tall, 13″ long, and 4″ wide.  This is roughly the same size as the old AT-AT model.  For the purist this is a bit problematic as the Heavy Assault Walker is considerable larger than the AT-AT.  However neither are really to minifig scale, so practically speaking it doesn’t matter.  The model is large enough to give the “Wow, thats a lot larger than a human” perspective, and in the LEGO universe that is what really matters.

Speaking of minifigs, this model comes with 5 of them.  Ray, Poe Dameron,  a Resistance trooper, a First Order Stormtrooper, and a First Order Walker Driver.  Each of the minifigs are detailed and represent the characters well. 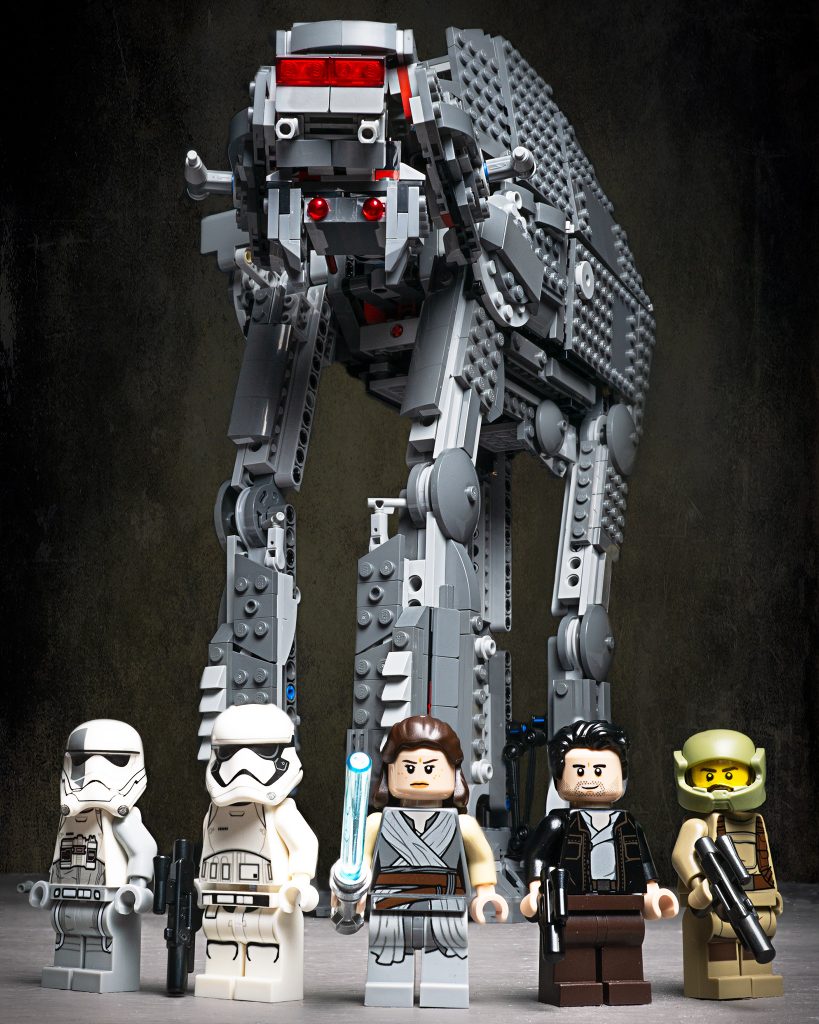 The build quality is pretty good, despite being a complex build with a lot of moving parts.  Very few parts fall of the model when being handled and posed.  My son accidentally knocked the built model from a desk top to a concrete floor, and it remained mostly intact. (I did lose a piece when this happened, but that’s more of a comment on the neatness of my studio than the build quality of the model). I had to put a few body panels back, and rebuild a foot. Give the punishment it had taken, that is more than respectable.

Generally this is a great looking model.  I personally value having as much realism in LEGO models as the bricks allow, and this model is a great example of that.  This model loves the camera, and looks great and realistic from most angles I threw at it.

One of the coolest features on this model is the main canon, which is mounted in the main body of the Walker.  The canon can be aimed up or down using a gear mechanism.  This canon is also designed to shoot small LEGO bricks, which adds to the playability, tho doesn’t do much for photography. On the other hand it doesn’t hurt the photography either.

The lever used to trigger the cannon is nicely hidden inside the main body armor so it is easily accessible for play, but (mostly) hidden from the camera.

The main body of the Walker has two hidden compartments where extra ammo can be stored, which is a nice touch.

The head also has two extra canons that shoot, and two that don’t.

Along the back spine of the Walker are a series of bombs.  The bombs look more like fuel tanks to me, tho, but the literature says they are bombs so I am going with it.  They add a nice bit of interest to the otherwise bland backside of the walker.

One of the most notable features of the Walker in the movies are the heavily armored fore legs.  This model does not disappoint. The front legs have a nasty looking saw tooth pattern, and a heavily armored shins.  I just wish they could have found a way to fortify the front ankles more as they are clearly a weak spot. 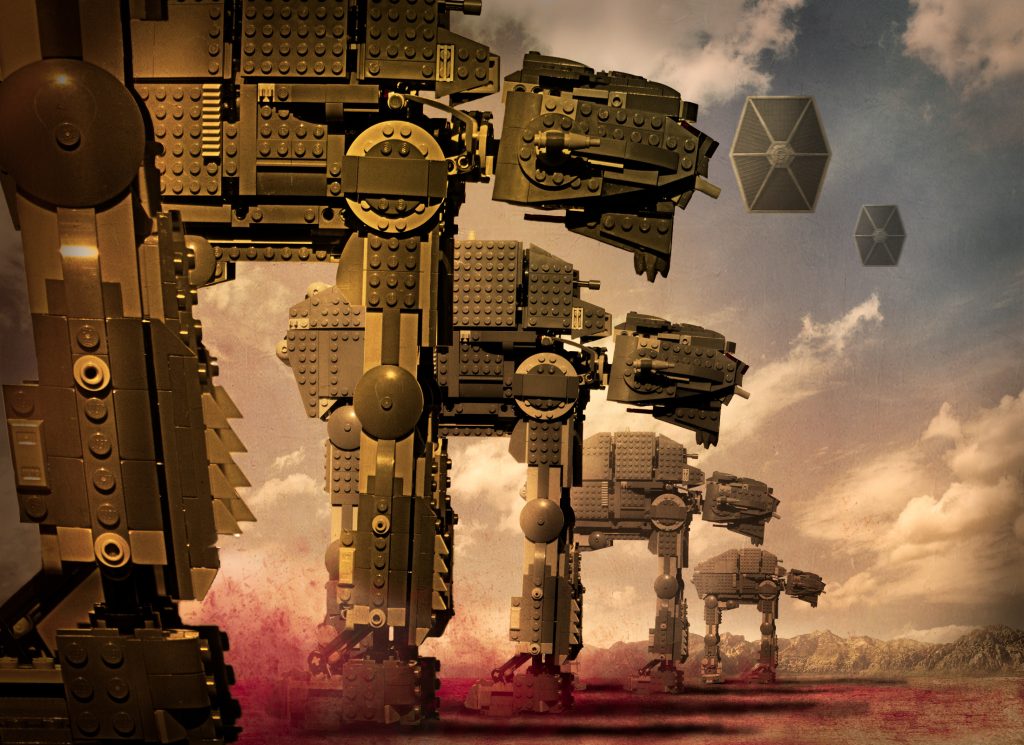 Heavy Assault Walkers line up for battle on the planet of Crait.

When given a model that has legs and a head the question of articulation becomes important.  Fortunately this model does not disappoint.

The legs rotate backwards and forwards at the hips, knees and ankles.  They actually have more range than would be practical in a full sized Walker, so range is not an issue.  The hip and knee joints are keyed so the legs stay in place when bent.  The downside is that the number of legs positions are limited, but has enough variety to get as close as reasonable to any pose one desires. The feet are light enough that they stay in place with just the friction of the joint.

The neck has two points of articulation which allow the head to turn fully side to side.  The neck does not allow any up or down movement however.

Despite being a solid, realistically designed model, it is not without its flaws.

The largest flaw is the movement in the neck.  The neck moves very freely, which gives the head a tendency to move on its own, and not stay in a pose. Many times during my shoots I wished the neck was a little more stiff.  The neck also has two points of articulation which allows the head to yaw side to side, and get into unnatural positions.

The second issue with the Heavy Assault Walker is the stability of the legs. Due to the way the legs are constructed they have a fair amount of side-to-side flexibility in them.  This means that the model is not very stable on its feet, especially on soft or uneven terrain.  As a result this model tends to fall over a lot, and at the most opportune times.

Sometimes it feels like the model has a life of its own as it will stay still for many minutes, then suddenly flop over.  Fortunately the model survives falling on its side very well, and recovery often doesn’t require replacing many pieces.

The final issue I have is the front shooting canons.  These cannons don’t exist in the “real” version of the walker, and is added merely for playability.  While it certainly does increase playability, the existence of those red circles on the head where they shouldn’t be tickles my pedantry. Overall this is a minor infraction, but still worth mentioning.

The Sudden But Inevitable Conclusion

I am a huge fan of the idea of Walkers, so I was excited to get my hands on this model for the review.  I am happy to report that this model lives up to expectations.  It is a well build and detailed model, that is as movie accurate as can be expected in a LEGO set.

Playability wise this model is great, as evidenced by the way my 8 year old son keeps asking, almost hourly, if I am done with this review so he can play with it.

Photography wise this model has a lot of strong points. It has a rugged build which will survive being taken into the field.  With its flexibility with posing, and its realistic build, this model is camera fodder. It almost seems to have a personality of its own. It can be tricky to keep the Walker in its pose, but once you do, it looks great.

The big bonus is that when this model isn’t being played with, or photographed, it looks awesome on a shelf.  What’s not to love?