You’re probably already asking yourself: what is ReadySetz? ReadySetz is a clever all in one diorama suitable for play, toy display or toy photography.

I was introduced to the ReadySetz brand diorama when I attended a toy photography presentation by IntangibleDandy at The Toy and Geek Fest a couple of weeks back. I was immediately intrigued by the photographic possibilities. After Eric’s talk we were allowed to play on the dioramas he had set up for this purpose. I immediately grabbed a mini figure and took a quick phone photo; I found the set is as cool as it looks. 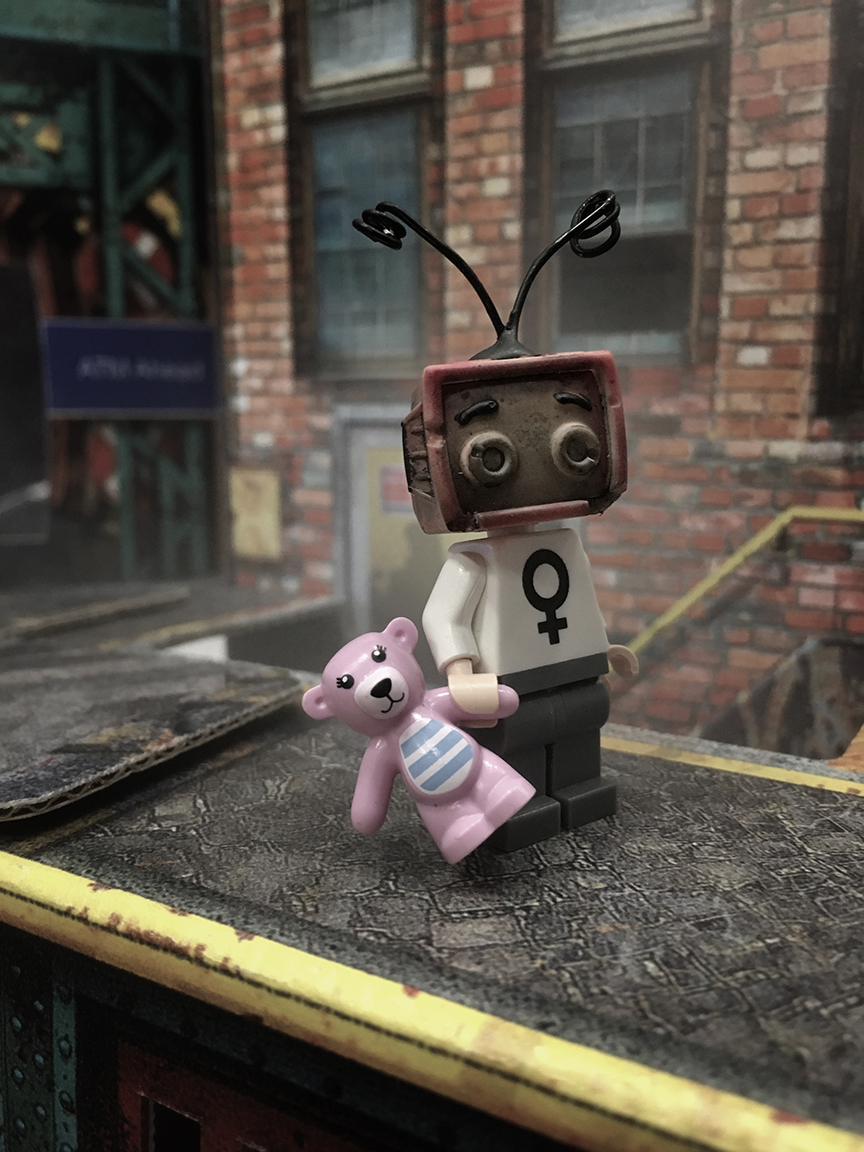 I love the idea of making clever dioramas like Tobias and Marco. Their behind the scenes posts and final images inspire me to take my photography in new directions. I love how they’re able to express so much emotion with their plastic props / people and clever lighting. But honestly I don’t seem to have the time (or skill) to create my own set ups. I need a short cut. So having a diorama on hand that is easy to set up, that I can use to practice dramatic studio lighting and execute a few quick ideas, is appealing. Enter the ReadySetz.

ReadySetz’s are advertised as sturdy dioramas that are easy to set up and that fold away quickly. Their primary target market seems to be play sets for kids. (If I was ten I would definitely think that this is a great place to set up toys and act out a variety of imaginative stories!) On their website they also point out that their sets, while sturdy enough to play on, are also great for displaying your toy collection or toy photography. I would have to agree.

ReadySetz’s are made of cardboard and come with great graphics. Currently the only theme available is very urban; but it does come in two sizes. There is a Collectors Edition for 6″ figures and the Urban 18 which is suitable for LEGO sized mini figures. When set-up, the diorama takes the shape of a multi level city corner.  As advertised, the ReadySetz is light weight, quick to set-up and quick to take down. When folded up, its fairly compact for easy storage (or hiding).

This diorama design is not a simple two dimensional cardboard set to place your figures in front of and photograph. It has lots of dimensionality and multiple levels which lead to interesting ideas and possible toy interactions. There are four levels of ‘play’ with lots of openings on both the front and back of the diorama. This leaves plenty of room in this ‘city’ to include an underground ‘sewer’, a garage door you can lift, stairs to go up or down, windows to lean out of and a roof to perch on. The larger set even has a helicopter pad to land on. Both sizes of the ReadySetz include easily attached ramps. 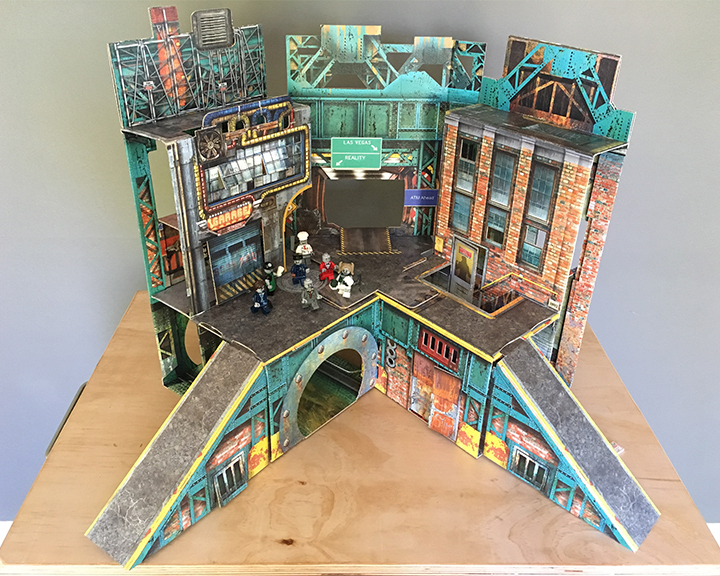 There are many advantages to recommend this set up to the toy photographer. The variety of backdrops in such a small space make it extremely versatile. These include:

When using a LEGO set for toy photography you often have to make modifications to accommodate the lighting and your camera. This can include removing walls, windows, entire floors etc. just to get a good angle. With the abundance of openings and access points in a ReadySetz diorama this problem is solved. Of course if you like your LEGO to live in a LEGO world, there are obvious disadvantages. But if you enjoy taking your LEGO mini figures and other small toys and placing them in photo realistic situations, then a ReadySetz diorama will allow you to do this without leaving the comfort of your home (or office). 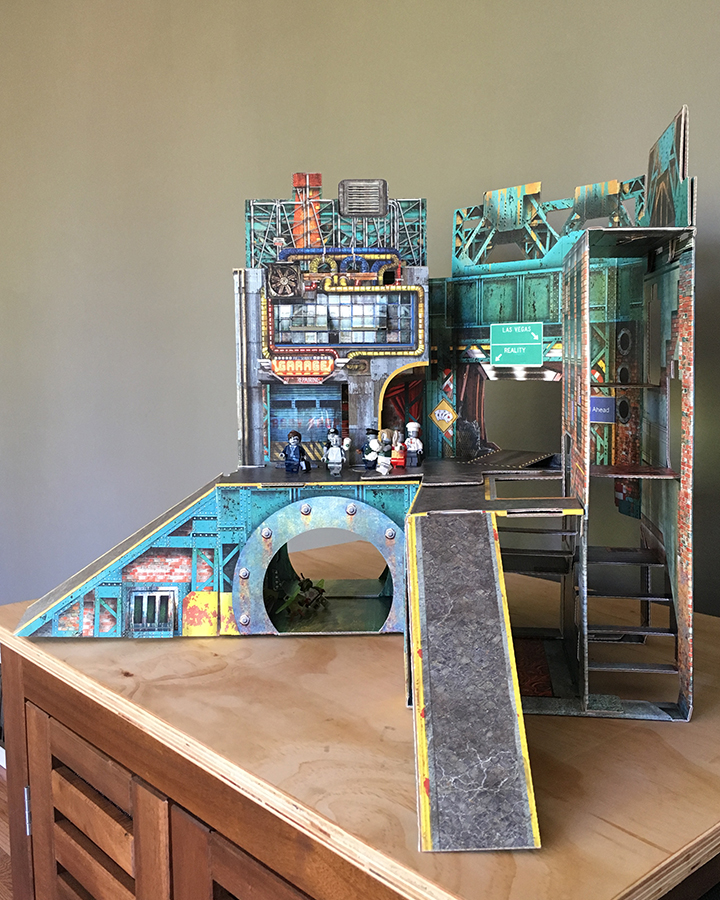 In the short time I’ve had to play with the ReadySetz I’ve stumbled across a few flaws. These are not insurmountable, you just need to know they exist before you spend your hard earned cash.

The first flaw is that the diorama is made from cardboard. Wherever you see the edges of the diorama, like on the doors, windows and the sewer cover, you also see the telltale edge of cardboard. You will need to either accept this as a limitation or use a little photo shop magic to blend or remove the unsightly edge. For my intended purpose, this is not a  deal breaker. I know that for the toy photographer looking for a hyper realistic look to their photos, this will be a problem. But for the vast majority of toy photographers who are doing this for fun and relaxation, this edge will not be a big deal.

One side effect of the stability of the design is overlapping cardboard. You see this on the main horizontal play platform. When I first looked at the set I glossed over this aspect of the diorama. But it’s hard to ignore the uneven surface when you’re setting up your mini figure. There are very few large flat surfaces were you don’t encounter some kind of elevated cardboard edge.

Another disadvantage of the ReadySetz, and I suspect this is not a unique problem, are the reflections. While the paper surface is extremely durable, its also shiny. I spent extra time setting up my lights to minimize the reflections. I’m wondering if spraying a mat surface on the cardboard would help? (Of course if you try something like this, make sure you test my theory on a small section first.) While the reflections aren’t a deal breaker by any stretch of the imagination, they will require you to get clever with lighting. 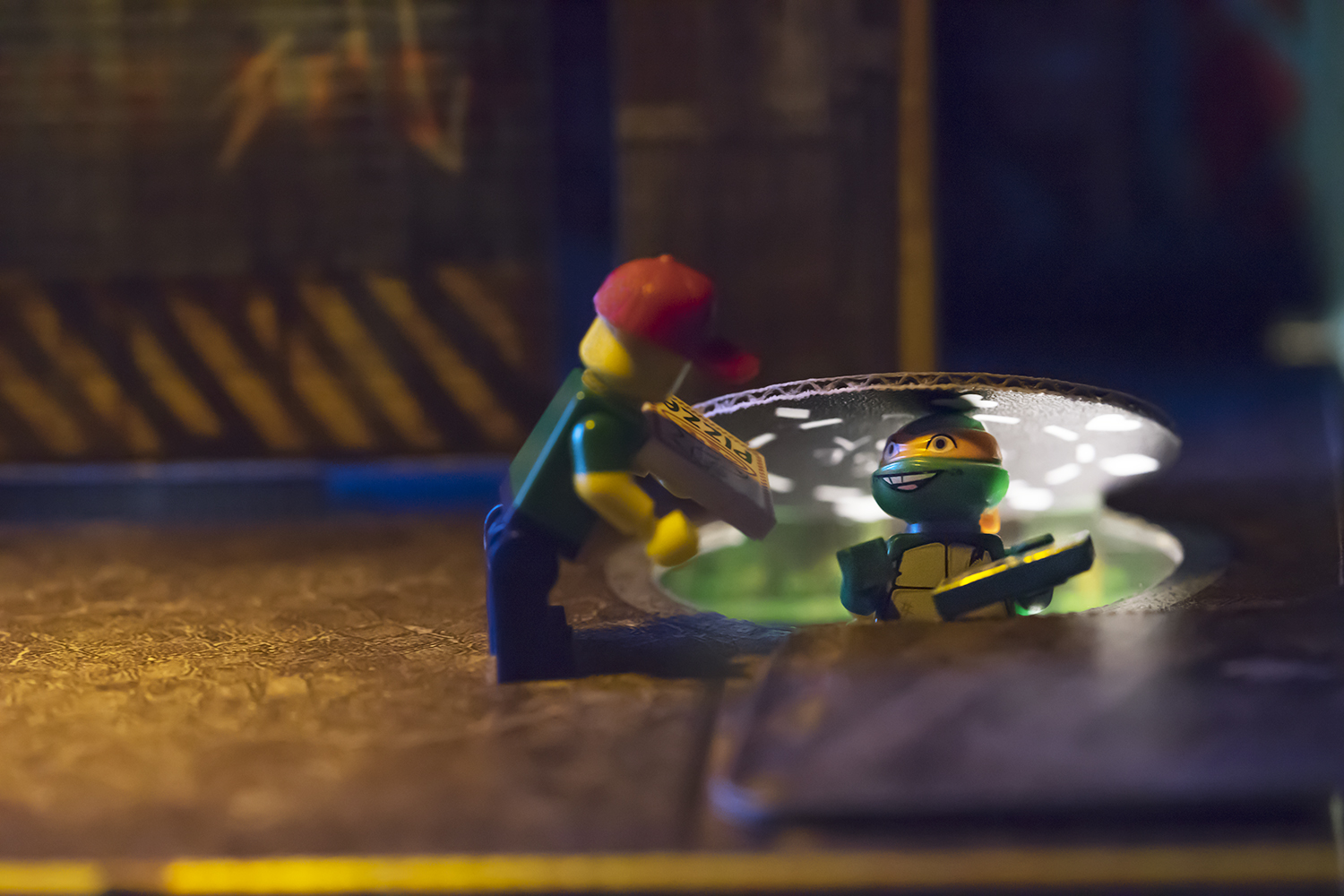 Overall I liked the ReadySetz diorama. I think its a great choice if you’re looking for an easy to use and versatile backdrop for your toy photography. Its also a great option if you have limited space or simply need a quick backdrop to scratch that photographic itch. I found the many different urban backgrounds inspiring. I can see Batman brooding on the roof top or maybe Spidermen swinging between those same roof tops? The open windows lend themselves to an urban Romeo & Juliet scenario. Or maybe I can stage my own zombie apocalypse?

Whatever your photographic ideas, if you’re in need of a diorama I would recommend checking out ReadySetz.

Do you use dioramas? Do you have a favorite brand? What are the advantages and disadvantages of this type of set-up? Feel free to share your knowledge below and we can all learn from each other. 🙂

This review was made possible by generous folks at Readysetz. If you would like more information about the company and the two models of the Urban play set currently available, check out their website. If you’re not a fan of the urban theme, they will be launching a Kickstarter project on July 19th, 2018. You can get information about this project and see other inspiring photos by following them on Instagram.