The Foundation Series: What’s Your Story?

I love a photograph that tells a good story, and I try to create images that do just that.  When I set out to make a new image, the first question I ask myself is “what story do I want to tell?”. What do I want the viewer to experience when they cast their gaze upon my image. To put it more bluntly: “What is your point, Dave?”

The idea of a story in a photograph is, to be honest, something I struggle with a lot. When I think story, I think the “Star Wars” saga, or “Lord Of The Rings”, or even “Green Eggs And Ham”.  It’s quite obvious that it’s not possible to put a whole literary story or feature length movie into a single photograph. Heck even something short like “Green Eggs And Ham” would be hard to fit into a single photograph, and that is a story comprised of only 50 different words.  So clearly we need to narrow things down a bit when we talk about story.

My definition of a story in a photograph is “a word, phrase, or sentence that describes the intent of the photograph.”.  This can be as short as an emotion, like “melancholy”, or  “two ninjas fighting.”, or “Luke Skywalker faces down a menacing AT-AT Walker approaching in a snowy storm”.

As you can see, the story can be as simple or complex as required  However once you have that you can use that story to help define how you want to create your shot.  Let me give a couple of examples from my back catalog of images.

The story for this shot is “Walking across a bleak dystopian wasteland”: 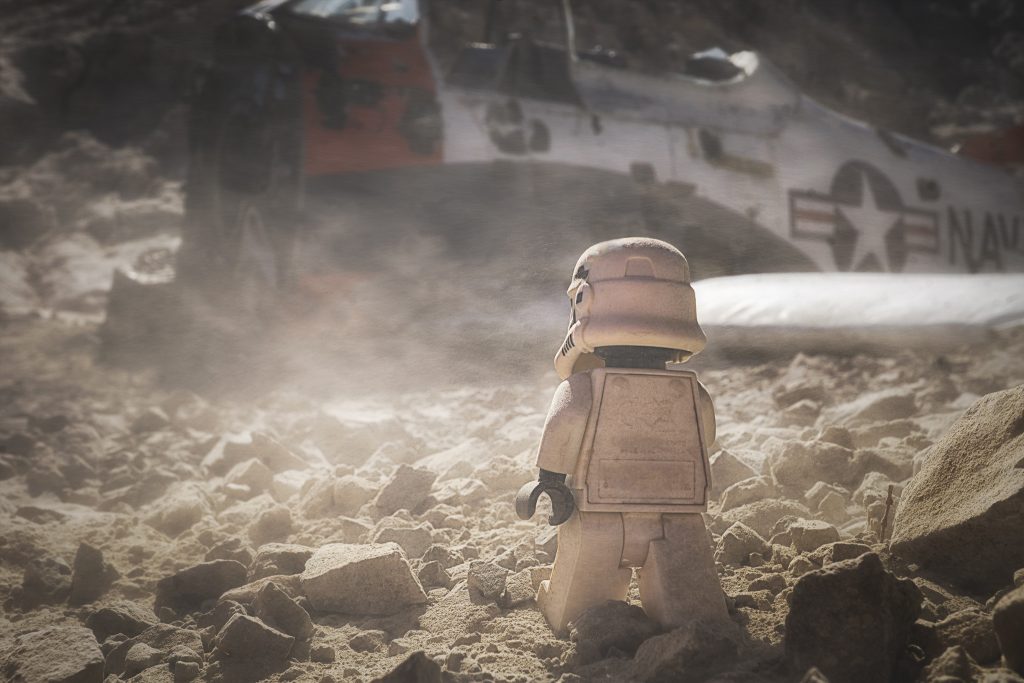 Walking across a bleak dystopian wasteland.

I found this location at Nelson Ghost Town in Nevada with this cool broken down plane.  When I saw the location, I came up with the story in my head, then started framing the shot.  The decisions I made were the following:  Walking implies distance, so I put the figure in the lower right corner so he had room to move in the frame.

Wasteland brings to mind hardship and decay, so I placed the figure between the rocks to give a sense of struggle against the elements.  I also blew some dust across the scene to give a sense of energy, danger and loneliness as well.  The plane is at top of frame so the is walking towards a decaying artifact.

Finally my story didn’t really care who was walking in the dystopian wasteland, so I shot him from behind.  This both anonymizes the figure (i.e. we don’t really care who he is), and also gives the sense that he is walking in solitude (we can’t see his face, so we don’t develop an emotional connection to him), which adds to the dangerous solitude one associates with a wasteland.

Contrast the above to this next shot. The story for this shot is “Boba Fett charging menacingly into action” 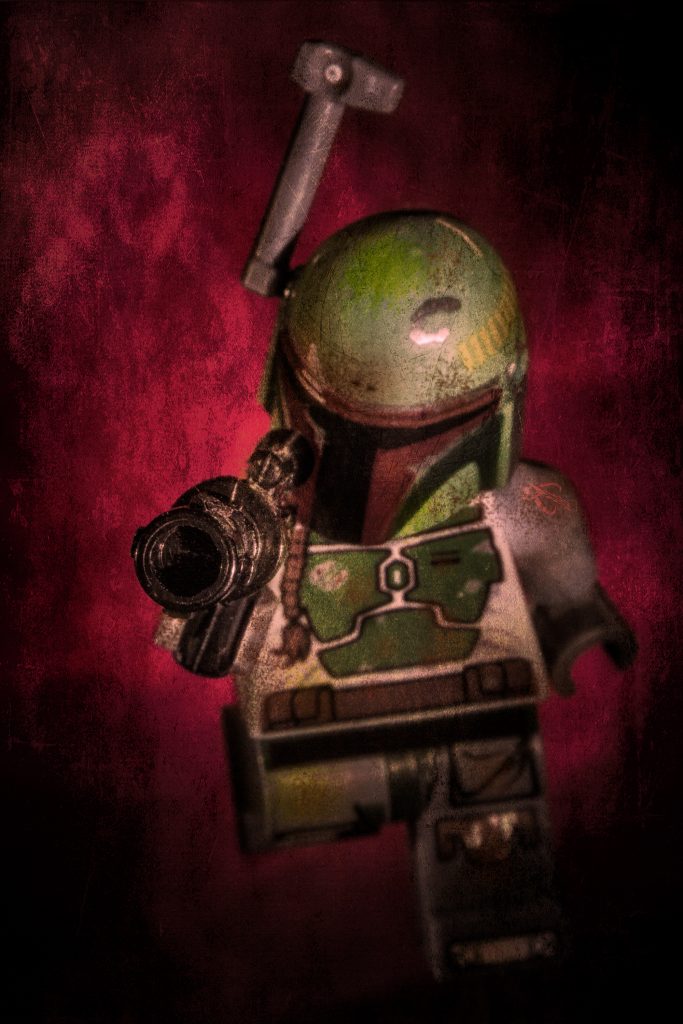 This shot is all about Boba Fett.  He is a well known figure in the Star Wars universe, known for shooting first and asking questions later.  So I placed him center frame, facing the camera, so we are forced to pay close attention to him.  To further the sense of immediacy and danger, I positioned him so he is aiming his gun straight at the camera. Not only that but he is running towards you at the same time, getting closer for a better shot.  He’s not threatening just anyone… he’s threatening you. Pay attention! You are about to have a bad day.

My story didn’t include a setting, so I made it a generic background, with some light to bring the character out from the background, further indicating he’s coming your way.  Since Boba is a rough and tumble man of action, I added some textures to him to give that sense that he’s seen a lot of action, and is capable of making good on his threat he is making.

Vastly different stories, vastly different end results, but in both cases the decisions made in each image serves the story.  If I had shot Boba from behind, the idea of him being an immediate and personal threat would be lost. If I had put the Stormtrooper front and center facing the viewer, the impact of a lonely figure walking across a wasteland would be lessened.

The story is important.

Lessons are always best learned by applying them to your own work.  So I’m going to end this post by suggesting an activity that you can do on your own. Completely voluntary, of course.

For this post, the assignment is to examine 5-10 of the most recent images you’ve created.  They can be toy photographs, or otherwise.  First write down the story you want to tell with each image.  Then examine the images in close detail.  Take 5 – 10 minutes and really study them.  Then ask yourself (or someone else) what story each image is actually telling the viewer.  Compare the two and see how closely they match up.

If the stories don’t match up too much, don’t worry about how to fix them for now.  I will cover more on this topic over the rest of this series. For now, get used to thinking of your images as having a story is sufficient.

See you next time!

If you’ve made it this far, come continue the discussion over at our G+ community! And while you’re at it, subscribe to our weekly email round up and our shiny new podcast!