Ship in a Bottle

Have you seen the latest LEGO Ideas: Ship in a Bottle set? Like all the LEGO Ideas sets this one is beautiful. There’s something about these fan driven sets that make them approachable, and very collectible. The Ship in a Bottle is no different.

How do I know? LEGO was kind enough to send around a few copies so that I, and a few Toy Photography friends, could take this cool set out for a spin. I’m here to report on the results and share the images that where created by Brett Wilson, Luigi Priori, Robert Whitehead and myself.

The set is actually three builds: the ship, the stand and the bottle. I enjoyed the building experience for all three builds. The ship was a nice compact micro build with six canons and preprinted flags. The ship bears very little resemblance to the original design presented by Jacob Sandovich. Considering how much smaller the bottle is from the submitted idea, you can see why the Ideas team made a few modifications.

The base was probably the coolest build with a couple of clever tricks utilizing the studs not on top (SNOT) building technique. I especially loved the inverted dish printed with an old fashioned compass rose design. Elegant and beautiful!

The bottle itself is cool, but rather fidgety to build. It won’t have any structural integrity until you place the neck of the bottle onto the end of the four 6 x 6 x 9 corner rounds. More than once it crumbled in my hands and I had to start over. The neck of the bottle is a simple yet elegant build. Personally I think it makes the entire bottle. The addition of a printed tile which represents the ‘wax’ seal seen on many rum bottles is a nice touch of authenticity.  So much so that this teaser image by Brett was rejected because it looked too much like a liquor bottle. 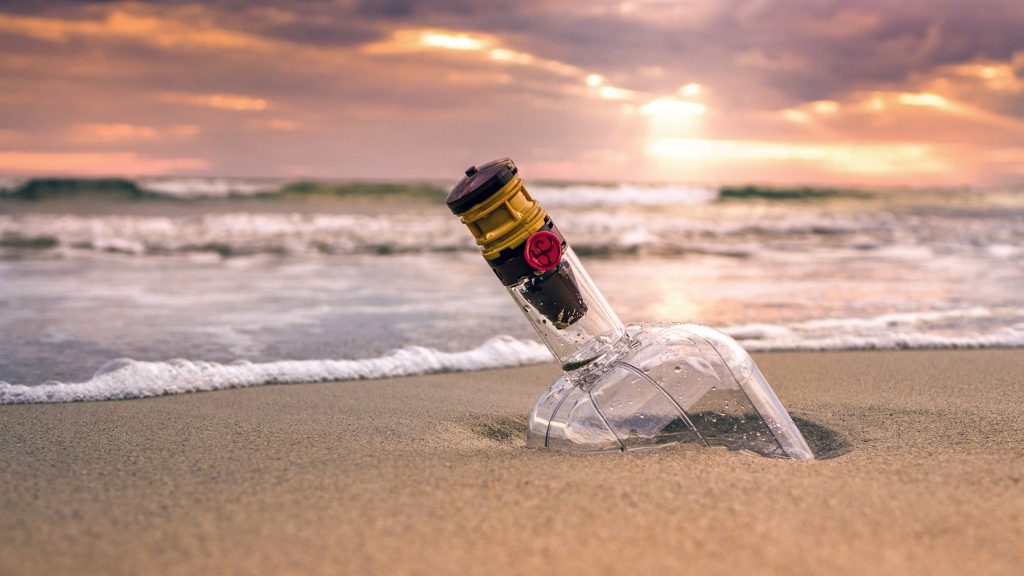 Reading the comments on the Brick Blogger I realized that the typical blog reading LEGO fan is primarily looking at this set as a display piece. There where several comments about the Ship in a Bottle’s lack of playability. 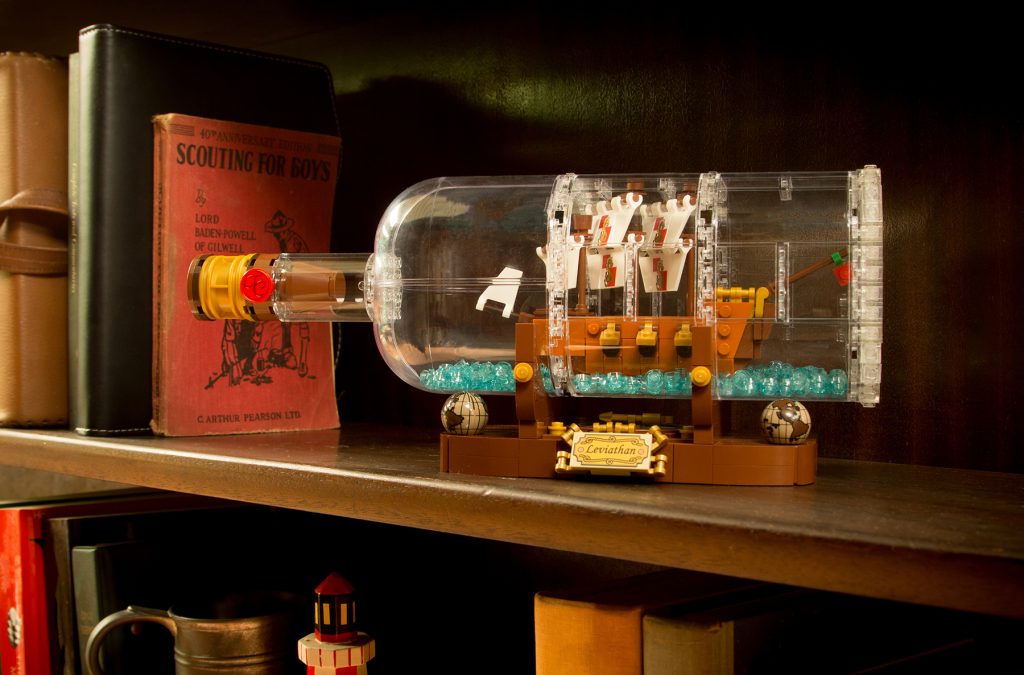 But why not this? 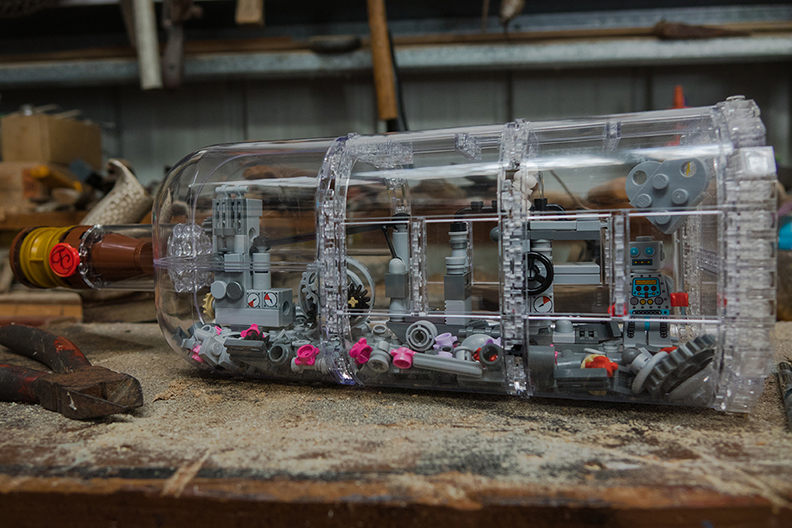 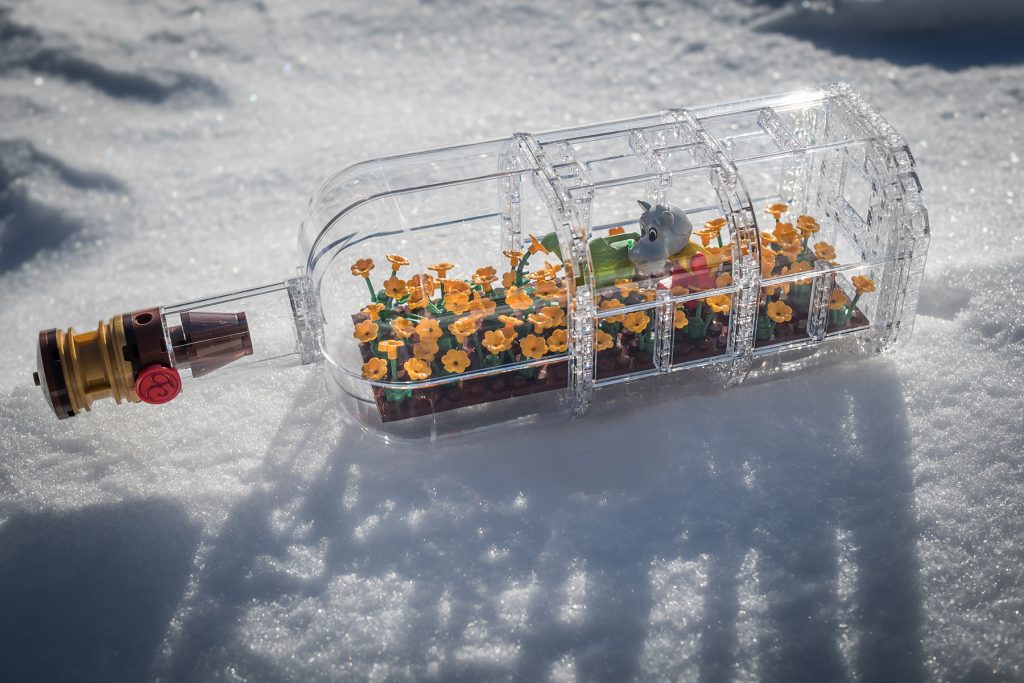 Benni sure is happy about his Ship in a Bottle. 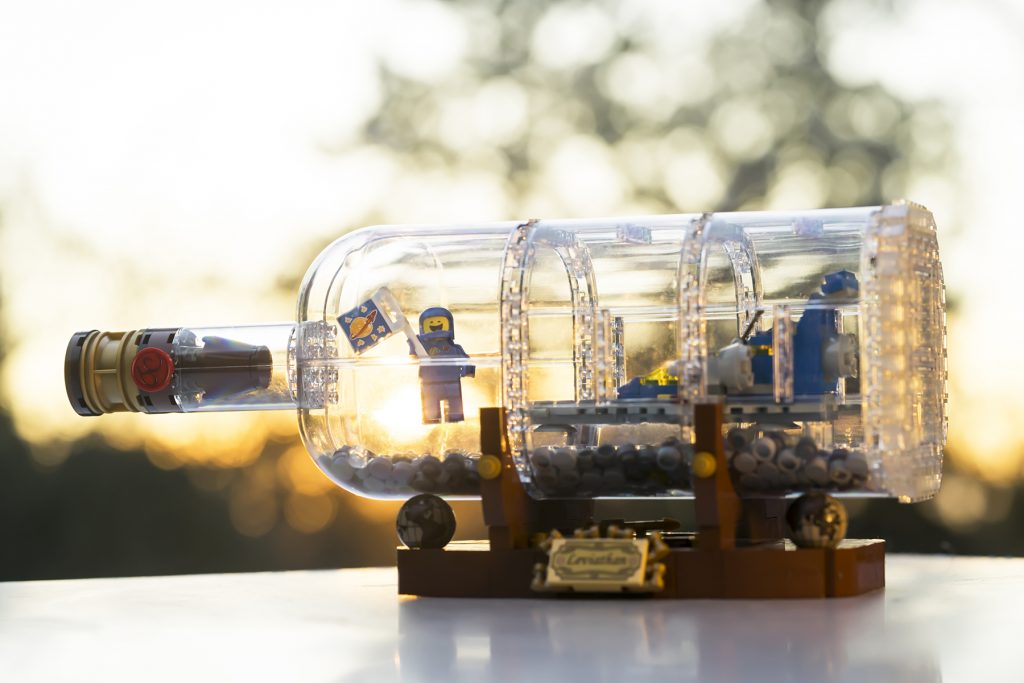 Yes every set has a few cons and this set is no different. The Ship in a Bottle has a very fidgety nature. More than once the set exploded in my hands and small 1 x 1 rounds spilled everywhere. This problem would disappear once I put the ‘neck’ on the bottle. But then I would make the mistake of picking up the bottle from the neck. Nothing good ever came from this mistake.

The base of the bottle is built from lots of small transparent parts surrounding two ‘large’ 1 x 4 x 3 clear windows. The photographer in me would have loved to see a clean shot of the back of the ship or customized scene.

Customize your Ship in a Bottle

Not every set is going to translate perfectly from submitted idea to production set. But I think that given the restraints of the market place, the LEGO Ideas team created a set that not only honors Jacob’s original idea, but offers an opportunity for imaginative customization.

Maybe you want to show off your favorite mini figures in a creative scene like Brett did with his Zombie water fun. 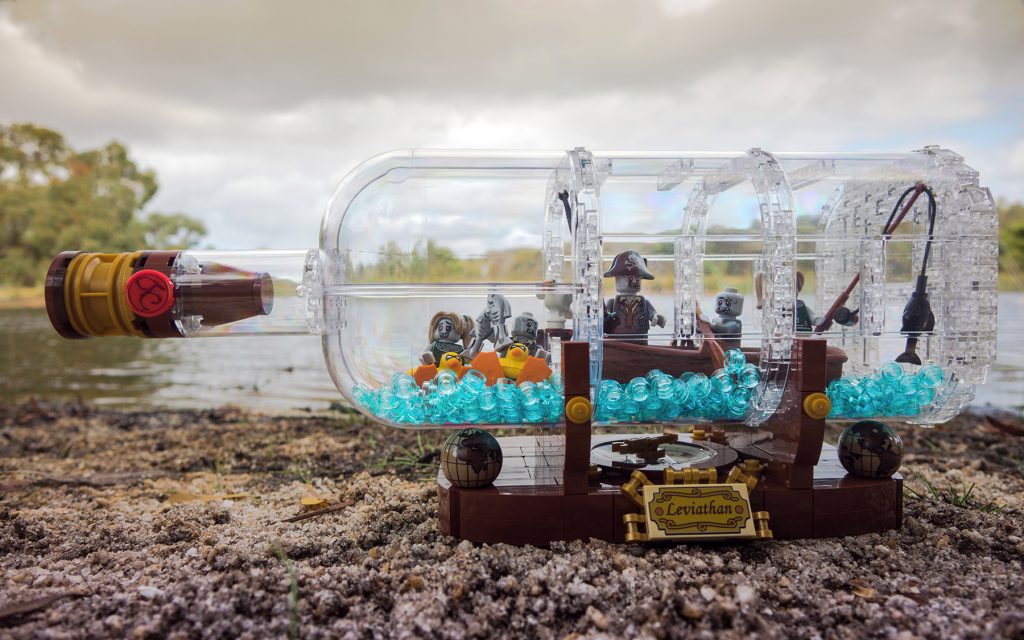 Or maybe creating a mini build like this adorable Brickley, like Luigi did, is more your cup of tea. 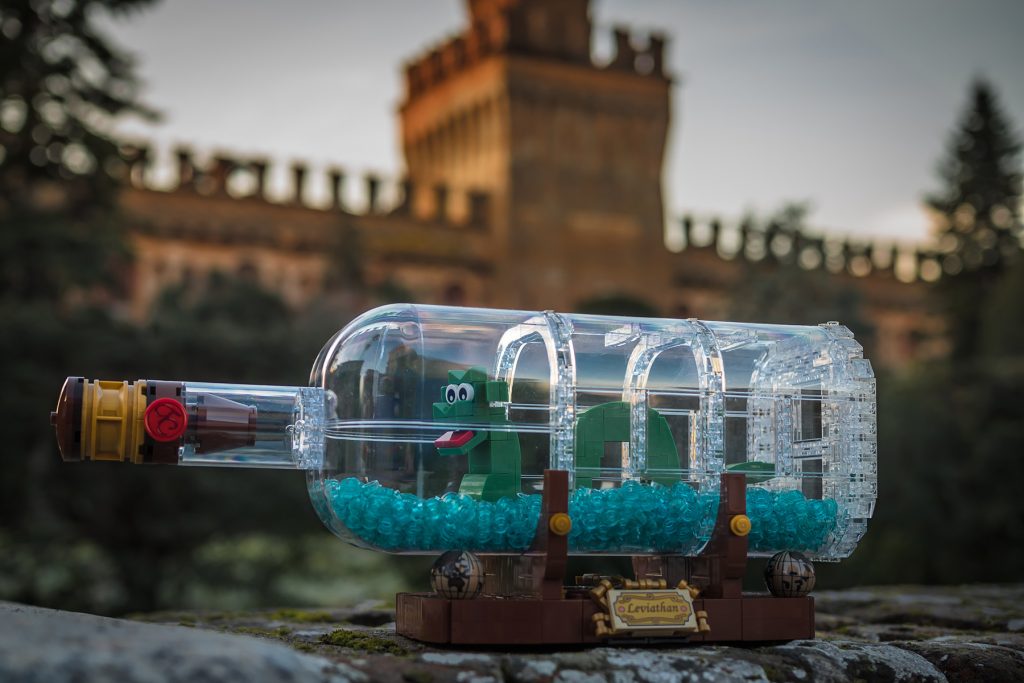 Of course there’s nothing wrong with simply enjoying this elegant set in its own right. The Ship in a Bottle is an wonderfully nostalgic look at a time when sailing ships ruled the oceans. When pirate chanties were sung and unsuspecting men where pressed into years of service on ships destined for exotic ports. 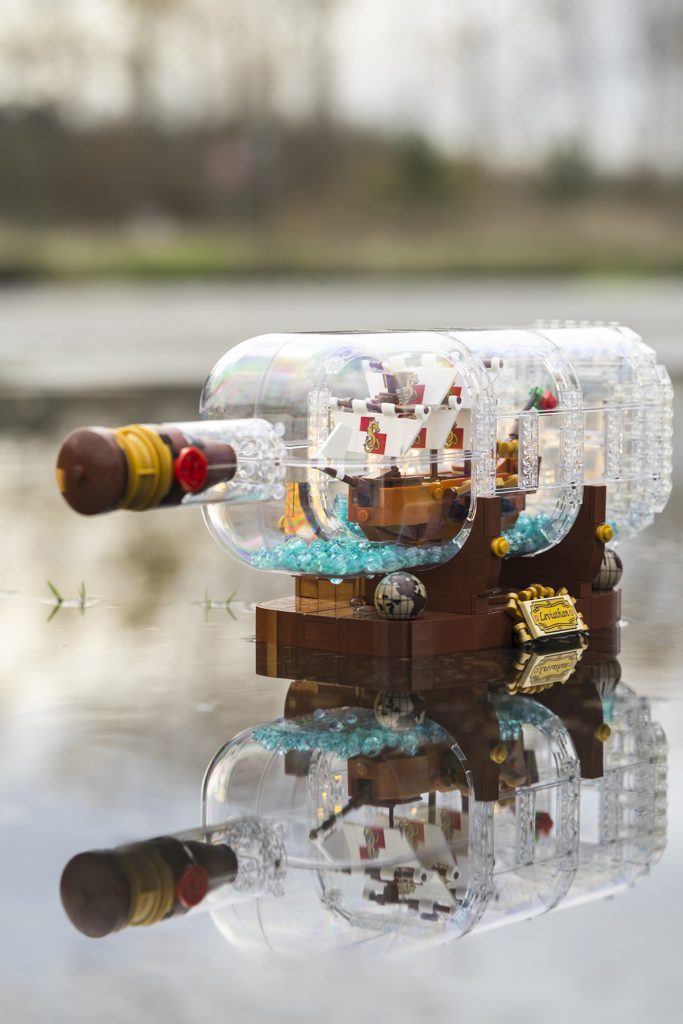 This set will be available for purchase onFebruary 1st which gives you plenty of time to think of a creative build to place in your own Ship in a Bottle.

Thank you Kim and the entire LEGO Ideas team for allowing us to take your latest creation out for an advanced test drive! 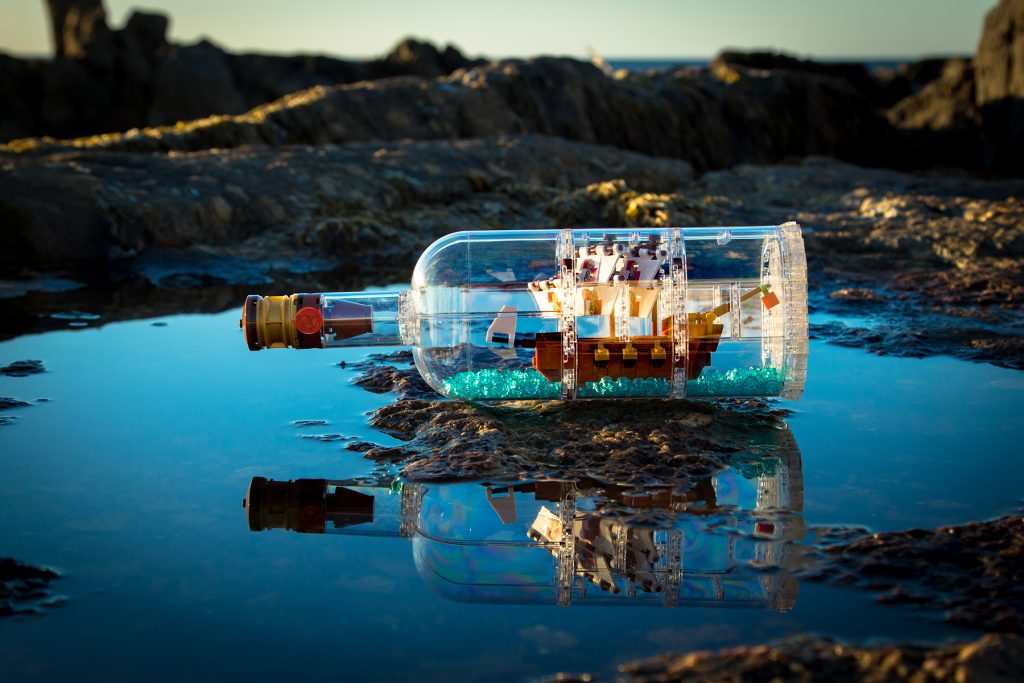