“To speak out once for all, man only plays when in the full meaning of the word he is man, and he is only completely man when he plays.” (Friedrich Schiller, Letters Upon The Aesthetic Education of Man)

Last year my pictures had to be radically abstract. This year they are all about miniature people. What happened? And am I being inconsistent in my photography?

I have always tried to be very clear about one thing: My photography is not ‘about’ the things I photograph – in fact, I could not care less in many instances. It is ‘about’ pictures because I like pictures. This notion is also supposed to help me escape a certain kind criticism: It has been said that photography is the death mask of reality and that it is not able to surpass the reality it depicts. I wanted to go beyond that. I aimed at pictures that are independent of the time and place they show.

That’s why I have been having difficulties with travel photography for years. If a travel picture were to serve memory, it seemed a bit pointless to me because I was convinced that memory is best served by the mind. And if I continued doing ‘my thing’ – making abstract pictures – while traveling: What would be the point of traveling? I could just make similar pictures at home… I know this may sound a bit extreme, but I often feel that way.

I distinctly remember standing in a square in Sète (France) thinking that one way out of the dilemma might be including H0 scale photographers or construction workers in a sight’s picture – just in order to aim beyond the picture of a palace, a church or whatever sight we were seeing. I pondered that idea for a while.

But I had no no idea how to proceed. All I had was a vague understanding of what Frank Kuhnert, Jennifer Nichole Wells and Slinkachu were doing. So I tried to learn everything about miniature photography first. Then I tried using toy animals. It was fun, and I still love that baby ‘gator! But the animals did not really urge me to carry on. There still is a squirrel sitting in the box, waiting to be fed giant walnuts. 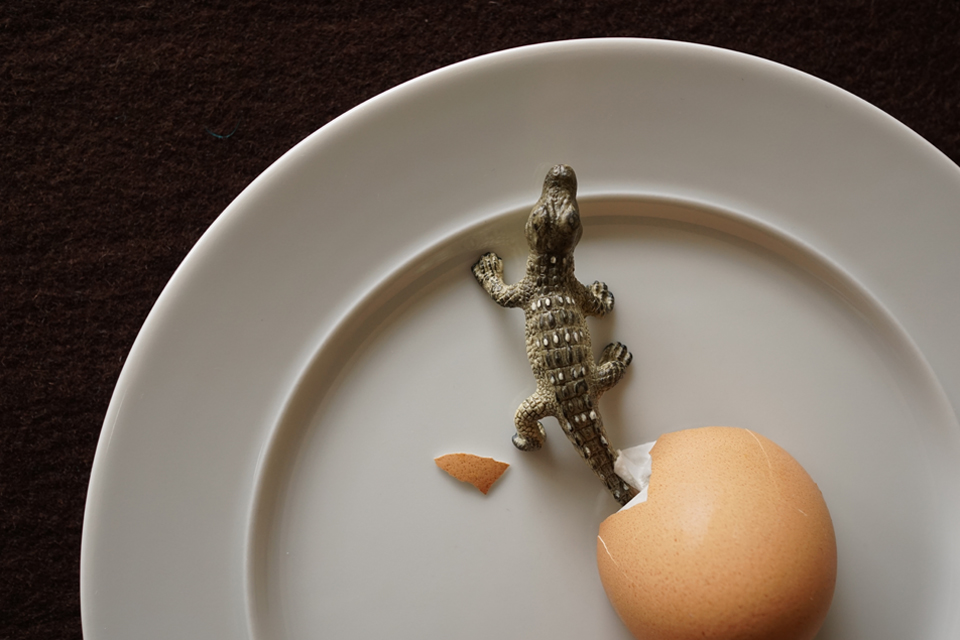 One of my first toy photographs

Had fun and got carried away

Finally I decided to give it another shot. I got a H0 figure I liked. A newspaper reader whom, being a keen reader myself, I could identify with. I started to play around with placing him on an actual newspaper. And I liked what I saw in the picture.

Things began to unravel. At some point I had the idea that I could collect phrases and illustrate them by juxtaposing miniatures with real world objects. I started to write them down along with some rough sketches. This technique was new to me, but it still is quite an experience. The ‘Green Notebook’ is filling up – and I have yet to find the time to turn all the phrases into photographs. (The first photo in this post shows where this is going; its title is In Over Their Heads.)

The time issue did not get solved when I bought a set of H0 scale businessmen, looked at each of them closely and eyeing one of them suddenly thought: “Wait a minute! You are Philip Marlowe!” I then tried to do a Film Noir movie still. Soon there was the idea of telling a stereotype detective story with just a few stills. Now the ideas and the pictures are multiplying again. Inspiration obviously comes fom movies, TV shows, and pictures but detective novels and music play a huge role as well. 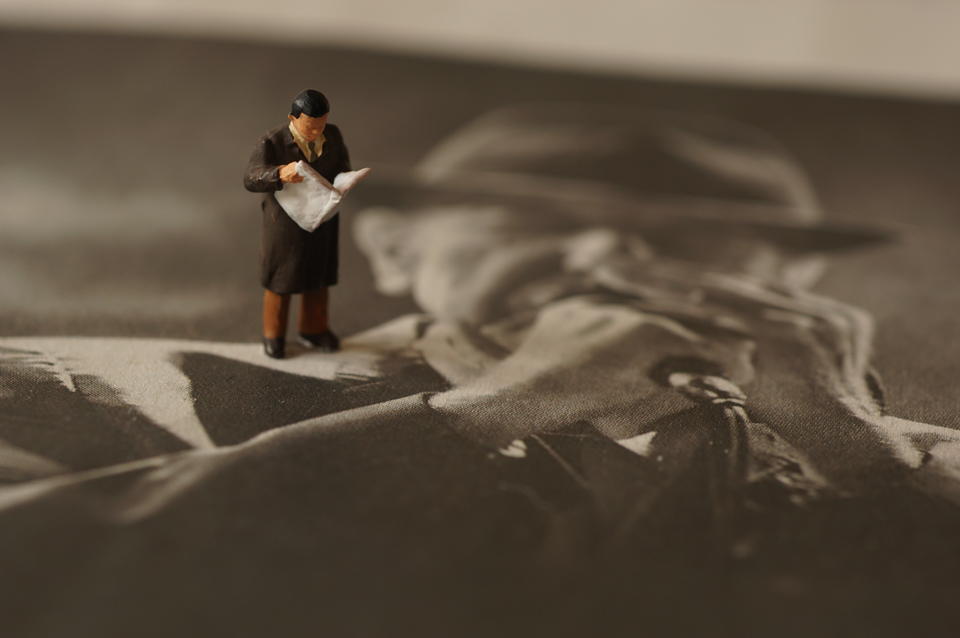 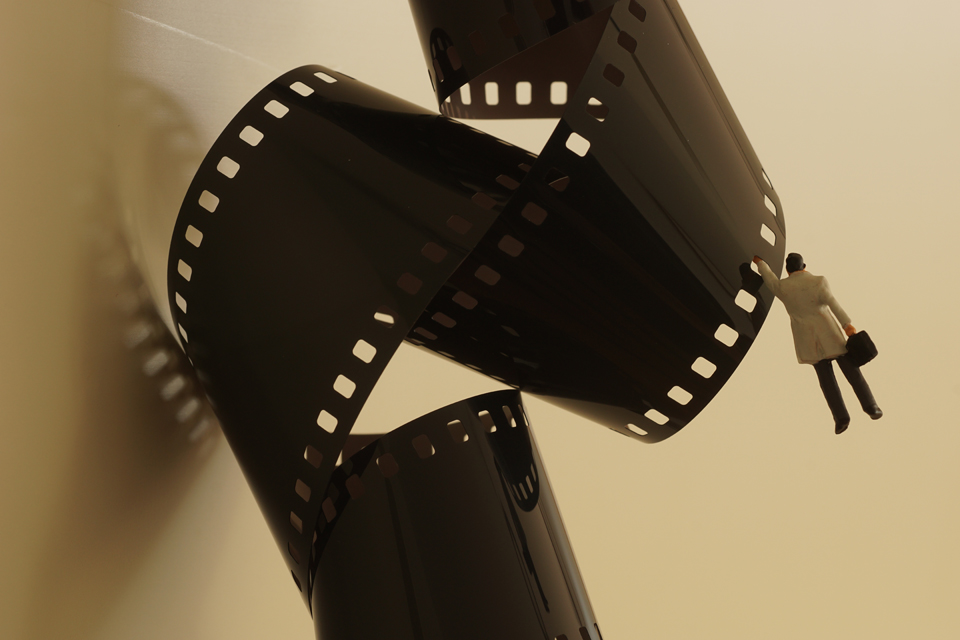 Von der Rolle – from the “Worlds Within Words” series that evolved over the last couple of months. The title literally means “off the roll,” it is an expression we use to say that someone is a little off

What am I doing?

So much for the mini history. But for all that the question remains: Am I still in line with the ideas my photography is based on?

Here’s how I understand it: There is an obvious difference between toy-photos-as-representations and the kind of toy photos you are likely to see in this blog (or on the pages of the artists I mentioned above). ‘Mere’ representations are often used in manufacturers’ catalogues; they are intended to show nothing but the toy in question – just google Preiser Geschäftsleute to get an impression.

In the more artistic images, however, light and composition play a (different) role. More often than not, these pictures also tell stories. I think that it is this narrative that reaches beyond ‘reproducing’ what is given. For me, the difference is comparable to the difference between saying “it’s a beautiful spring day today” and stating the same fact in a poem. 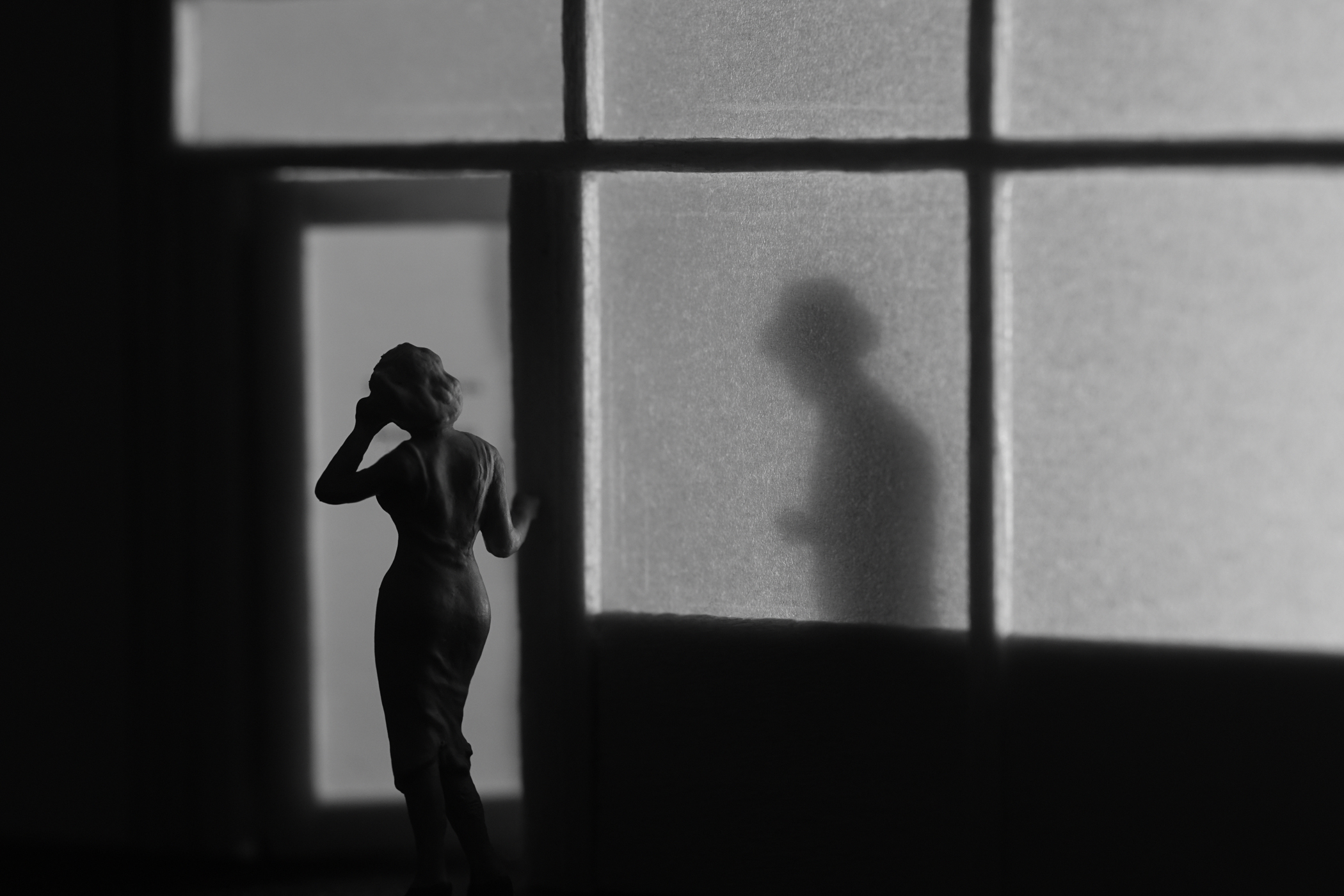 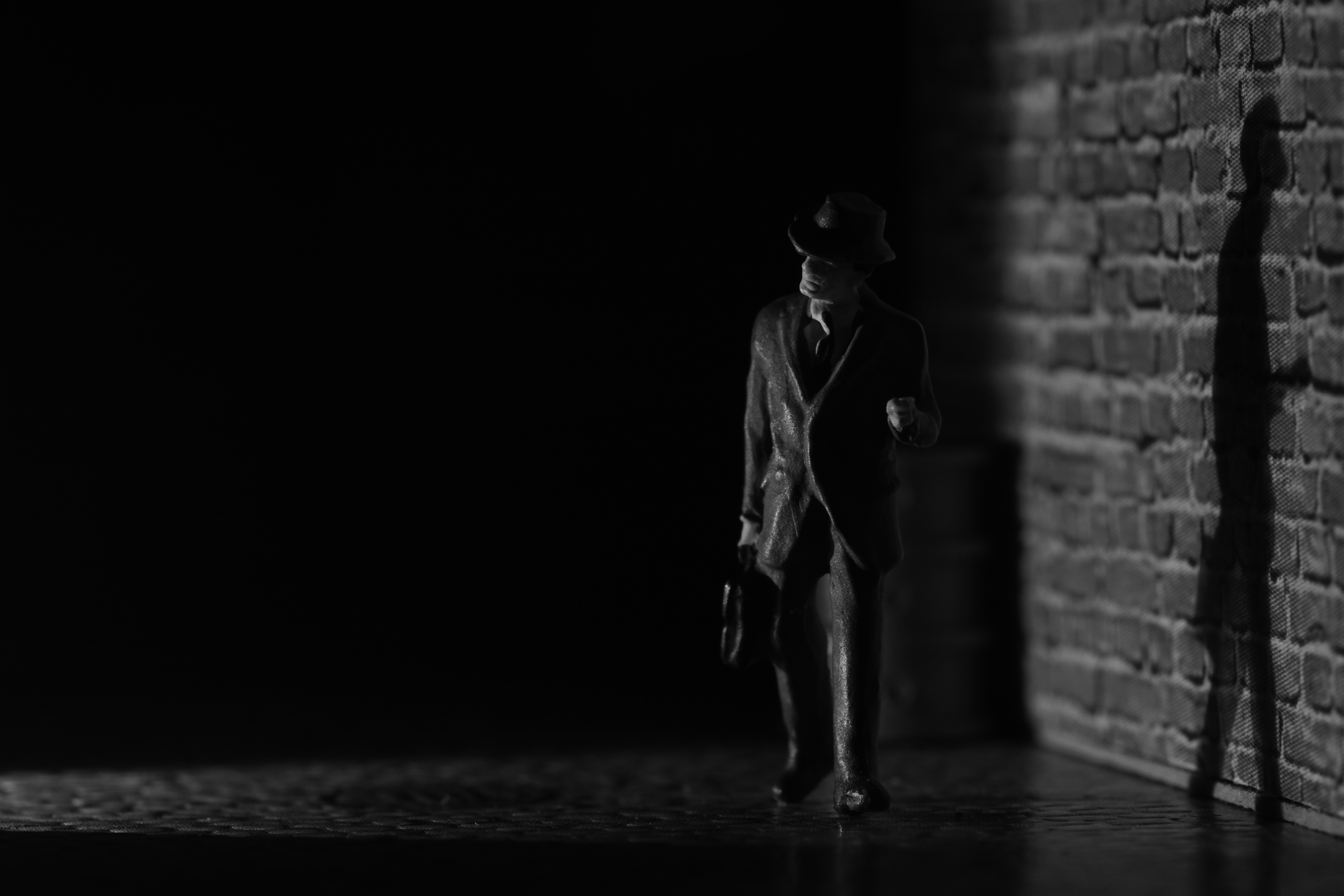 “I was neat, clean, shaved and sober and I didn’t care who knew it” – from the “Noir” series. The quotes are from novels by Raymond Chandler, an important source of inspiration for this series

So why did I pick toys as a motive? I still do not know for sure. Maybe it’s because miniature photography allows for more control over the picture (though it is still quite an effort for me). But maybe a man’s just got to do what a man’s got to do, as one of my favourite detectives, quoting John Wayne, once put it.

What about you? Did you ever try your hand at something that then developed a momentum of its own?

And does your general concept of photography influence the way you photograph? How?