Toys on Vacation – an iPhone challenge

Last week I set myself a challenge, go on vacation and only take photos of mini figures with my iPhone 6s. I know, not the biggest challenge, but when you’ve been photographing with a DSLR and a dedicated macro lens for a while, it can be hard to switch back.

This mini family trip to Washington DC was planned around exploring a new city and spending time together before school started, not a full blown lego mini figure photo safari. While our group adventure was the prime objective, my kids also knew I would want to take a few photos along the way. Lucky for me they were both tolerant and helpful in this quest and I could not have created these photos without their help and patience.

Since most of our time would be spent exploring the museums of the Smithsonian variety, I didn’t want my photos to be mini figures in front of ‘stuff’ similar to this image I took of Darth with this cool sculpture by Arnaldo Comodoro, “Sphere #6“. (It shows you how steeped I’ve become in the Star Wars universe when I start seeing Death Stars everywhere!) The photos I wanted to take needed to feature the buildings and places we visited and remind me of our adventures. Thinking about the photos I wanted to capture, I tried to focus on The Basics like leading lines, the importance of light and foreground interest. I discovered that it wasn’t that easy to find locations that had both good lighting and interesting features when confronted with an unfamiliar urban environment. While I had my difficulties, I really enjoyed the freedom to experiment that the iPhone afforded me. For me using a phone to capture images was a liberating experience. I tend to put a lot of the pressure on myself  to keep raising the bar which has the unintended consequence of taking the fun out of the whole experience.

By limiting myself to only using my phone, I was more prone to take chances, set up quick scenarios, try new situations and even take a photo or two with food. There is a certain cavalier attitude that occurs when capturing LEGO with a phone rather than a full sized DSLR. For me it was a return to my early roots of toy photography and I thoroughly enjoyed the process.

Keeping it simple doesn’t mean that I didn’t bring a few tricks to the process. I had brought along a bounce card and a flash light since I was pretty sure I would be photographing at night. We’re not used to balmy evenings where I’m from and the idea of exploring the many monuments and memorials along the National Mall on a warm late summer night was appealing. I learned that by shinning the light onto the reflector rather than directly onto the mini figure, I was able to light the figure without a lot of glare or reflective highlights that you can get with a direct light. This trick made it possible to photograph in the near dark and still capture a few fun images. (If you decide to use this method yourself, make sure you have a good assistant along to help man the lights. I was lucky that my son was more than happy to by my assistant.)

Another part of this challenge was to only edit the photos on my phone. It’s been awhile since I’ve done this, generally preferring to edit on my computer using Photoshop or at least use the larger surface of an iPad. I was surprised at how easy Snapseed, my preferred editing application, made even this part of the process. I was able to remove the scaffolding in one of the photos as well as the usual distractions and minor flaws in other photos. If you’re not editing images for selling or display like our good friend Brett, then this mobile application is more than up to the task of editing an image for any social media platform.

My biggest take away from this whole experience, besides rekindling my joy of mini figure photography and realizing I can shoot in most any light with a little help, was how much my overall approach to photography has changed. I was more than willing to lay on the ground to get the perfect photo of my kids or to rearrange them to get the background just right. I also realized I had no hesitation whatsoever when it comes to photographing toys in public. The National Mall was busy due to the long US holiday and to say there were crowds would be an understatement. But this did not stop me from getting out the flashlight or laying on the ground – all to capture an image. 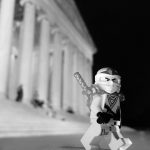 ‘Ninja at the Jefferson Memorial’. I figured since the image as almost entirely devoid of color, why not go all the way to black and white? 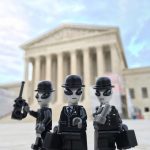 ‘The Watchers keeping an eye on the Supreme Court’. I discovered early on that those large white buildings make for a rather dramatic backdrop. 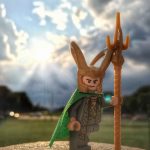 ‘Loki on the Mall’. If you look really closely you can see a miniature Washington Monument. The clouds and light were lovely in the late afternoon and I wanted to try to capture that moment. Too bad I made the rookie mistake having his hair and staff touch! 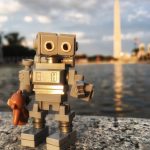 ‘Keko on the Mall’. This was a better shot of a mini figure with the Washington Monument in the background, but I probably could have told a better story – why did I use the teddy bear? 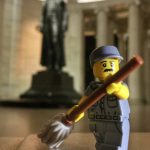 ‘Cleaning up after the crowds.’ This is one of my favorites from the trip. I’ve not had a chance to use this figure before and I thought he was well suited to his task. 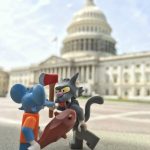 “the state of American politics’. I had this image in mind when I left Seattle. Im extremely happy with how it turned out. 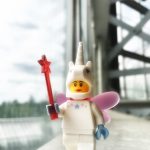 ‘The Botanical Gardens’. I wish I could have done this building justice! No amy best work, but fun to edit anyway. 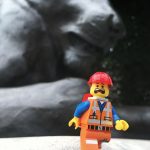 Emmet at the police memorial’. This was not the image of Emmet I was looking for, but still fun to take advantage of a bronze lion for a quick photo stop. 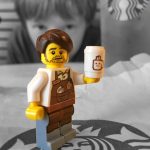 “Breakfast of champions”. My favorite part of editing photos on a phone or tablet is the access to tall the various photo apps. Also no photo safari would be complete without at least one photo bomb. 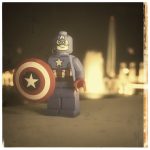 “Captain America at the WWII memorial”. This apps do come in handy in helping to resurrect an mediocre image into something worthy of posting. Here is an example of an image that I simply couldn’t nail, but managed to edit into something I could live with. 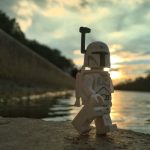 “Boba at the reflection pool”. The sunsets were stunning and Boba and I did our best to capture the moment. 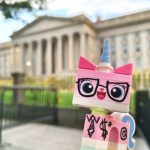 “Bizness Kitty at then Treasury”. No trip would be complete without at least one photo of Unikitty. I took one at day and one at night of this pose. I decided the daylight one was better. So hard to work around all the fences and security that makes up much of Washington DC! 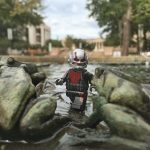 “Ant Man asking for directions”. This fountain was a real find! As my son and I were on our way to the Botanical Gardens we stumbled across this out of the way bronze fountain complete with lily pads and frogs, just Ant Man’s size! 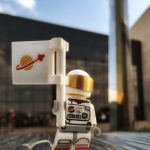 ‘The Air and Space Museum’. – this is probably my biggest near miss but I did like the sculpture in front of the museum. I think next time I will need to lay down on the round to do this location justice.

I’m very happy with the results of this challenge. My only regret was not taking more time to create a few specialty mini figures for photos that reflected more US history. Certainly having a Benjamin Franklin, a few ‘red coats’ and some Homeland Security cops would have been helpful to tell better stories. And why didn’t I have the ‘Spy” from series 16 with me when I visited the International Spy Museum? I guess this means I have to go back!

Have you every created artificial photographic limitations for yourself to spur creativity? If so, what did you do and how did it turn out.