How does a Seattle toy photographer end up attending a San Francisco Bay Area photo walk to celebrate the 5th Birthday of G+? Some might say it was simple coincidence, I say it was destiny.

Soon after the Seattle Toy meet up wrapped up, I decided to meet-up with Dennis and Melissa to look around The San Francisco Bay area to see if it would work for a future meet-up. June 24-25th turned out to be the perfect weekend. At the same time plans were being layed in the Google Create community to celebrate the upcoming 5th Birthday of G+ that same weekend. Photo walks were being planned across the globe, hangouts were being organized for non photographers and many celebrations, both small and large, we’re in the works.

Nothing was being planned in Seattle, but there was a gathering planned for the East Bay at the Albany Bulb. I checked with Dennis to see if we could work this into our own plans, and as fate would have it, this was one of the locations on our agenda. (This was the first sign of destiny’s hand at work)

Even though I’ve never attended an official photography photo walk, other than our own toy photography gatherings, I was intrigued by this event. Not surprisingly, the biggest draw for me was the people who were also planning on participating.

I’ve only been on G+ for 2 1/2 years, a far cry from the majority of Google Create members who all seem to have joined at the Beta, or pre-beta stage. So whenever I’m around this group of super creators, I tend to feel intimidated. At the thought of meeting a few of the friendly people I’ve been following, Leo Deegan in particular, I was more than a little nervous.

Saturday soon arrived and Dennis, Melissa and I headed off to Muir Woods for some early morning location scouting. This epic journey yielded no photos and more than its share of disappointment. While the redwoods were undoubtedly stunning, they were behind fences and overrun with tourists. This was no place for a bunch of toy photographers who are used to tramping through brush and laying on the ground to capture the perfect action photo. On the shuttle, headed back to the car, I was killing some time catching up on G+ and ran across a stunning underwater photo. After my own experience shooting underwater for 20+ years, it takes a lot to impress me and this photo did more than that. Dennis and I had a excellent conversation discussing how it was accomplished.

Soon it was time to arrive at the Albany Bowl. We were running early since Muir Woods was a bust and we arrived at the beach before everyone else. I amused myself by setting up a quick photo. Soon some likely candidates were gathering near by. I decided to be brave and see if this was the random group of strangers I had come to meet, luckily they were.

Soon there were approximately 30 attendees gathered, not one a toy photographer except for Dennis, Melissa, Kiwi (who came to join the fun) and I. Every one was in high spirits and the weather was gorgeous. The swag provided by our Google hosts, t-shirts, special G+ birthday stickers and G+ logo lens cloths, helped to break the ice. A quick group photo was taken and we were off to explore the area. (Note to self: take group photo at beginning of all toy safaris!) Smeagol has a new Precious! – image courtesy of Dennis Taylor

Sam Breach, the official organizer of this event, brought along a fashion model for people to work with. For many of these landscape photographers, this was a rare opportunity to work with a human model and they all seemed to be having a great time. After our disappointing morning, I simply wanted to take a few photos, which in hind sight was the wrong attitude take. behind the scenes by Leo Deegan

The location was perfect! There were numerous found object art installations, mounds of broken concrete covered in graffiti, tall grass, pools of water perfect for reflections and the light just kept getting better. The only down side was the wind, tack and sticky tape was a must for all small toys.

Dennis and I answered questions for any one who was interested in knowing what we were up to. They was plenty of interest and most everyone was supportive. While I was talking with Leo and Sam, underwater photography came up and specifically the image I had seen earlier today. As destiny would have it, the photographer, Eric Raeber (who I talked about earlier) was there! I was soon introduced to him and we had a great conversation about his other projects, and how he created that amazing underwater image. I had been originally drawn to his work with toys (go figure) and it was fun to find out we had more in common  than just subject matter.

Behind the scenes images by the talented Leo Deegan. Thanks Leo! 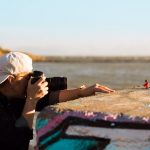 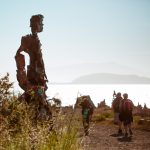 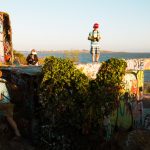 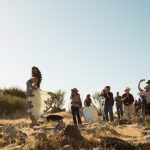 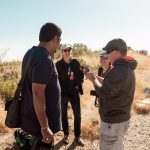 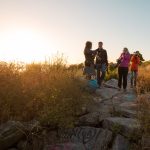 My biggest take away from the event, other than making personal connections and putting faces with names, was the amazing conversations I had. I’m not one to talk tech, camera specs, or geek out on gadgets with other photographers. But I do love to talk about the underlying stories, the ideas behind the images and the intent of the artist. I wasn’t disappointed in the few brief conversations I had. Each of us may be traveling or own photographic journeys, but telling stories, universal themes, conceptual concepts and connecting with the viewer were are common concerns. My biggest regret was that I didn’t have more of these conversations. I realized later that there were other Google Create members in attendance that I would have liked to have made a personal connection with.

I can’t thank the organizers of this event enough. I know that Sam Breach put a lot of work into this event as well as coordinating the world wide events and deserves a special shout-out. A big thank you to the generous folks at Google who had custom shirts, stickers and lens cloths made for us (seriously, how cool is that!?).

I don’t think it was by chance that I ended up at this event, I think it was my destiny. The toy community can be very insular and this was my much needed reminder to look outside those safe walls. In his recent post, Mike mentioned the need to find inspiration for ones own work beyond other toy photographers. For me, it’s not simply looking at others people’s work, regardless of the medium, it’s the conversations that I have with other creatives that gets me excited. Saturday’s event has left me with much to think about; what more could I ask for?

There were as many missed opportunities in this amazing evening as there were connections made. But I’m not too worried, it simply means I need to make a return trip. I may be from Seattle, but San Francisco is a short plane flight away.

Have you attended a photo walk with non toy photographers before? How did you like it? What did you learn? Would you do it again? My favorite photo from the event. It took me four tries in four different locations and a little luck with the wind to nail this one. It was worth it.