I’ve been waiting a long time for this set. Since October 2018, to be exact. What is this set and why have I been waiting so long for it? To put it simply, this is a pack of four Marvel Minifigures that fill in some big gaps in the Lego Infinity War lineup. It was going to be a promo at Toys R Us for October 2018, but…well, we all know what happened to TRU. After lots of confusion, it was made available for a brief time as a freebie on Lego.com. As to why I wanted it so badly…that should become evident as we go along.

The first minifigure of the pack is War Machine MK 4. Detail-wise, this is THE best War Machine to date. None of the others can compare. This version of Rhodey rocks an intricately printed torso and legs, arm printing and some slick detailing on the helmet. 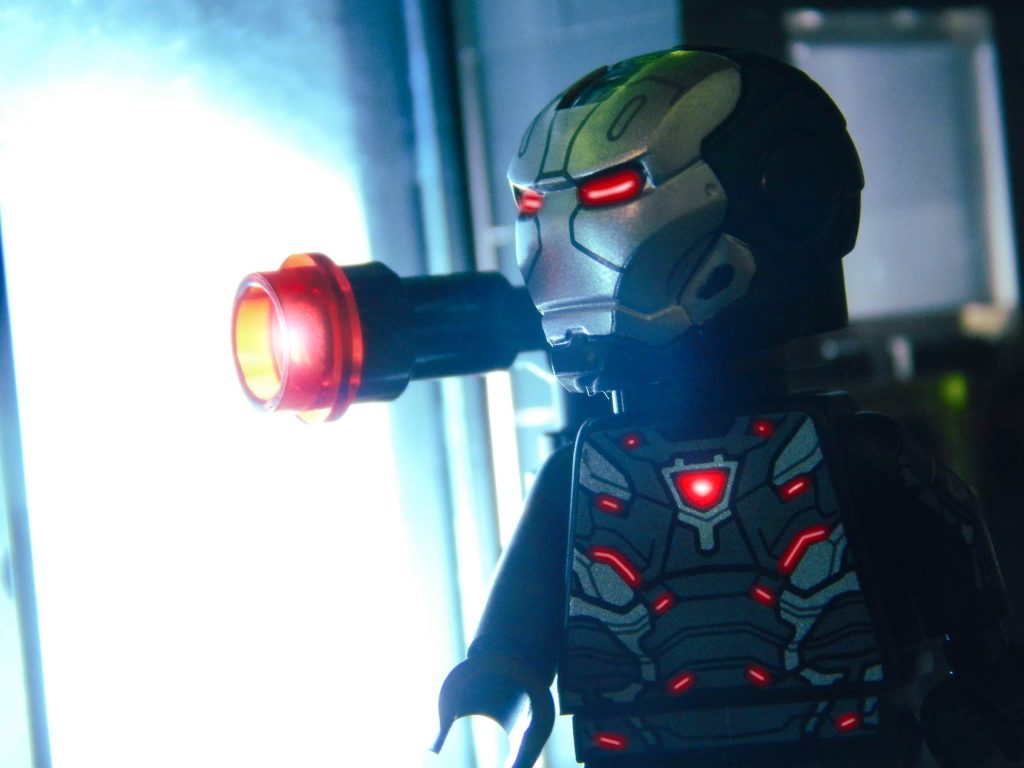 Rhodey’s face is brand new with two new expressions. It’s always nice to get darker-skinned Lego heads, since they’re not too common. Using this head for custom figures could work…except one side of the head has a red HUD! As a fan of Marvel, this is awesome for me. It might be less so for someone who wanted a generic dark-skinned minifigure. 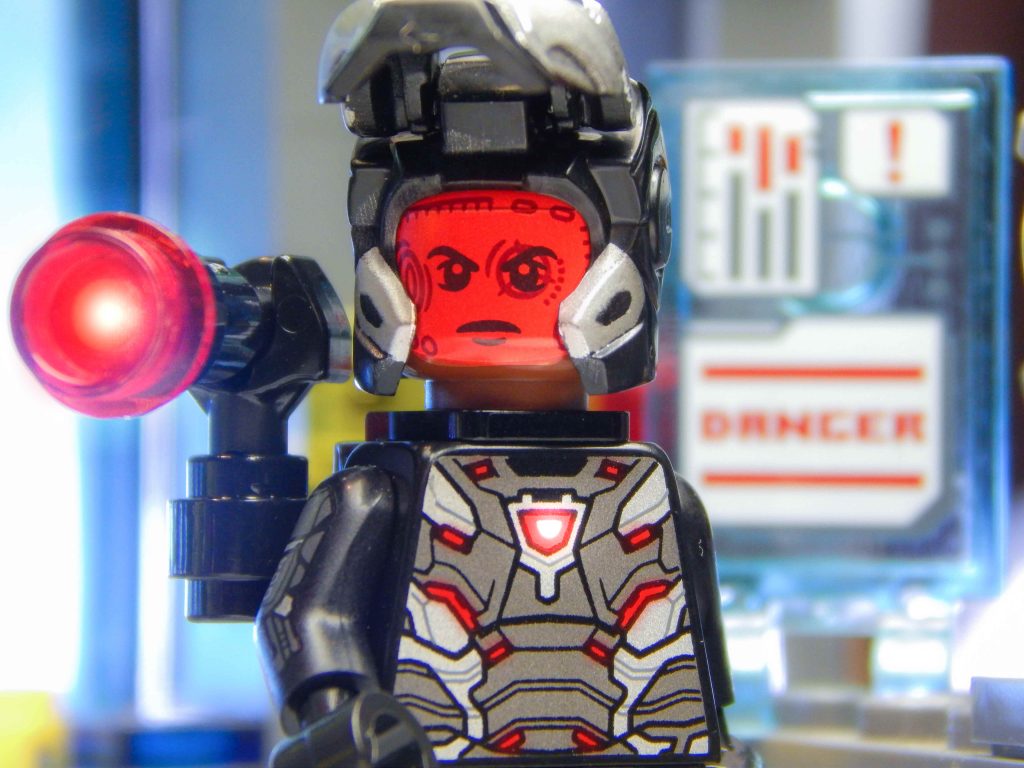 War Machine’s ever present over-the-shoulder cannon is here too. It can be articulated a bit and you can always cheat a little for photoshoots. Adding a few of the new Power Bursts can lend a dynamic flare to photos and reduce Photoshop work. If I had to find something to call a con, I’d say the visor falls off too easy. It would really suck to have this guy outside for a shoot and lose the visor because it popped off. 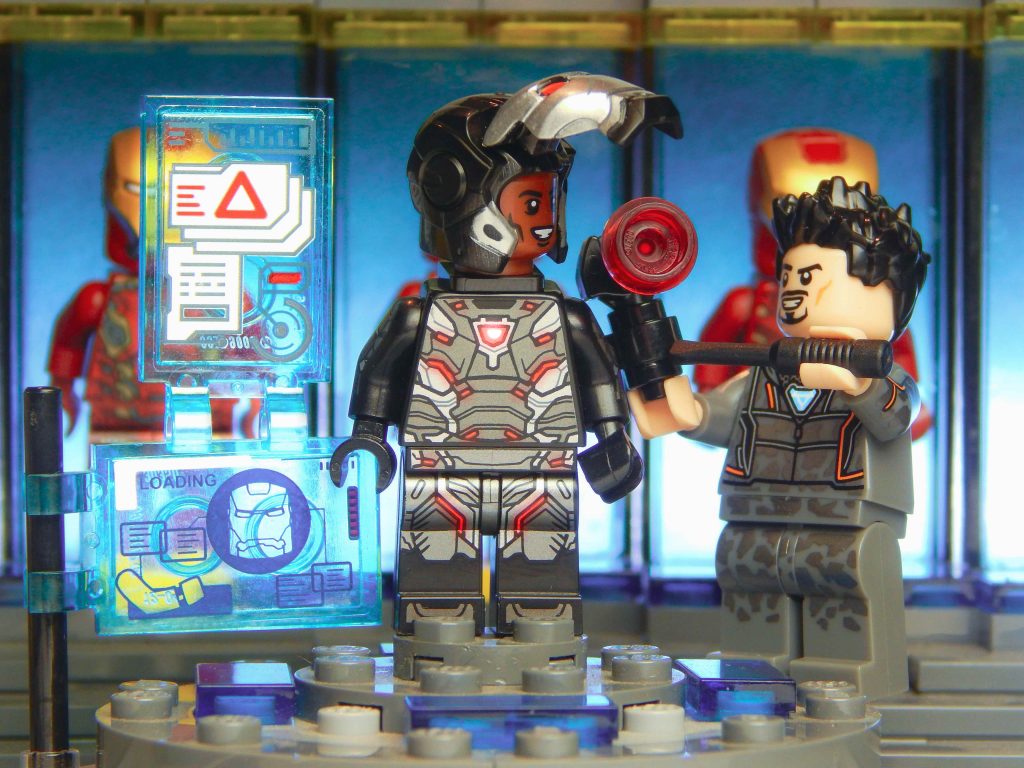 Figure number two is jogging suit Tony. This minifigure is great for a couple reasons, but mainly because it’s been awhile since Lego has done a plainclothes Tony. There is only one other out-of-armor Tony and he comes in one of the Iron Man 3 sets from 2013. The jogging suit of the new one is not exactly accurate to Infinity War since it sports a light-gray with silver and orange color scheme rather than the darker, almost black, and red seen on-screen. In my opinion, this works out quite well. The more generic color scheme allows Tony to fit into a plethora of scenes, instead of just Infinity War based ones. 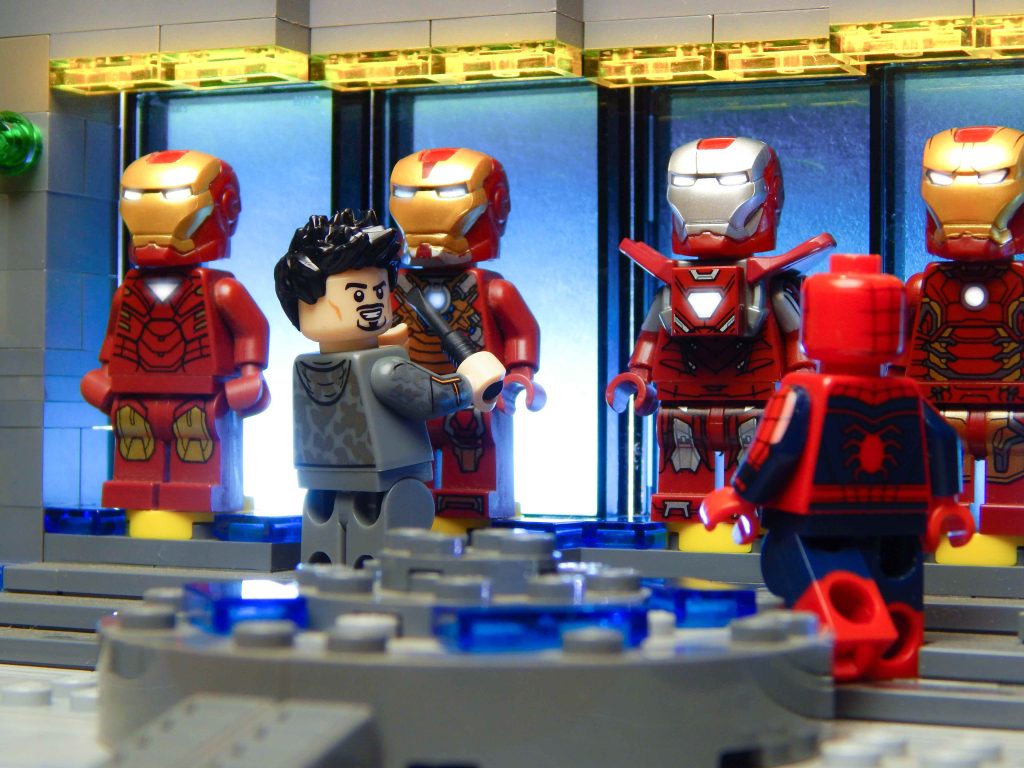 Do you even wear all those?

Tony gets a new face, featuring a cocky smirk that is almost exactly the same as the one found on Silver Centurion, and a wonderfully expressive nervous/shocked look. I personally would have liked to see a face with Tony’s orange-tinted sunglasses in lieu of the grin. The nervous face is perfect though. This minifig has a lot of potential despite the sad lack of glasses. Next is Wong (played by the actor Benedict Wong), Dr Strange’s assistant in protecting the Sanctum Sanctorum. I’ve seen quite a few photos featuring Dr Strange all alone in the Sanctum, but now he can have a buddy. Again, the detail level is in the hundreds on this figure. The main standout detail for me is the blue sash that wraps around the side of Wong’s right leg (from the front). 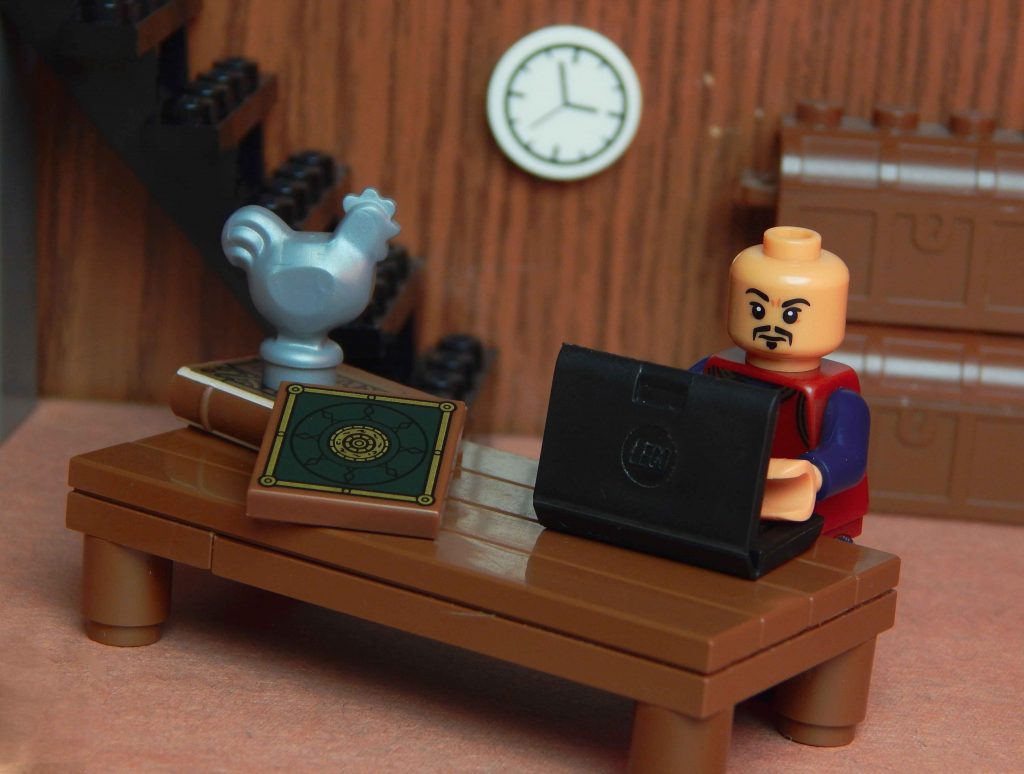 Mine got a tiny QC issue, but it doesn’t show up on camera too well, so I can live with it. Wong gets a brand new head, just like Rhodey and Tony. It has only one side since Wong is bald here. I don’t know if the lack of hair was the right choice, because in the films, Wong does indeed have hair, albeit very very short hair. I have tried various hairpieces, but none of them seem right, so I’m not sure if there is a solution to the problem.

A 2×2 tile representing a book is included. From a collector’s standpoint, Wong is my least favorite minifigure here. He’s great, but I’m not a big Dr. Strange fan. However, from a photographer’s standpoint, this guy is a lot of fun to shoot. I don’t know what exactly makes him easy to shoot. Maybe it’s the magic element to his character. Maybe it’s the detail. Or maybe both! But he’s a blast to shoot. 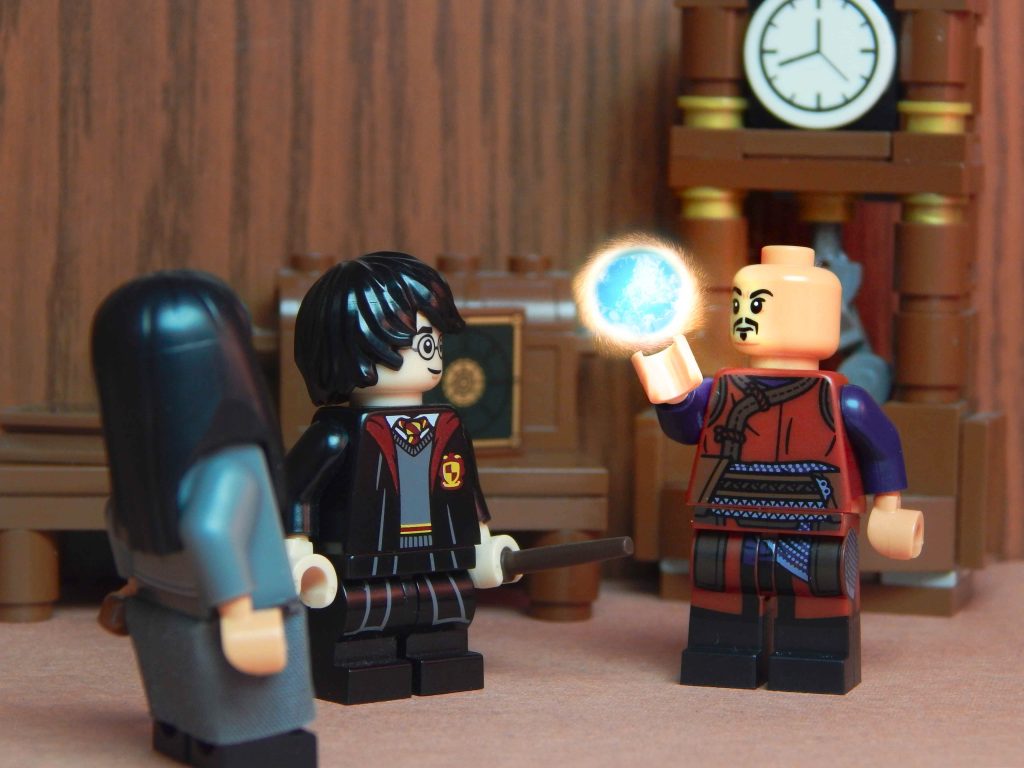 No Wands, No problem

Last but not least is White Wolf, aka Bucky Barnes. Let me jump to the most exciting part of this figure: the face. When Lego released Bucky in the Captain America: Civil War sets, they used Star-Lord’s face. Star-Lord!! He’s pretty much the polar opposite of Bucky. I was not happy about that, especially since the only other Winter Soldier minifigure only had a masked face. Lego finally rectified their mistake and made a new, exclusive face and it looks great! It features appropriate expressions, one stern and one angry. 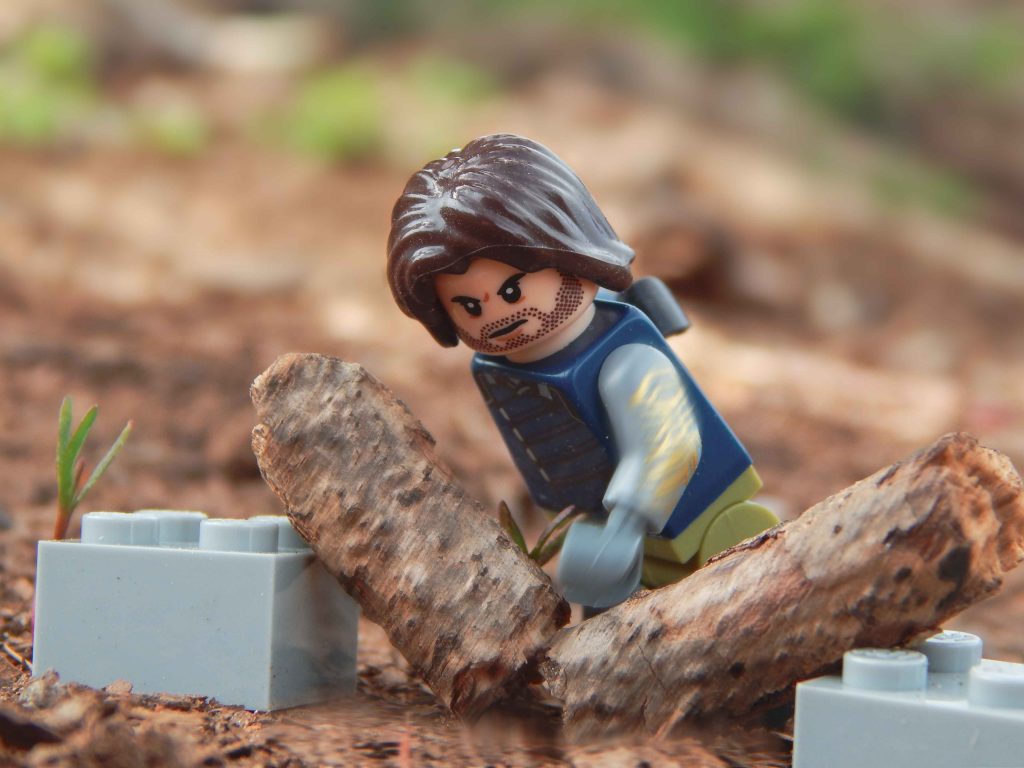 The rest of the minifig is excellent as well, with dual molded legs, a holster printed on one leg and a printed mechanical arm. I like the arm less than I expected. The design is just a little jumbled. It also isn’t centered on the arm. I don’t know if this is purposeful or a widespread issue, because most of the other reviews I’ve seen of this set had the same thing.

Bucky comes armed with a double-barreled pistol. Not really the ideal weapon, but Lego has a thing against ultra-realistic guns. Still, Bucky is very well done and I could see his face and legs coming in handy for military customs. Bucky, for me at least, is the opposite of Wong. My collector side really really likes him. He’s just such a great representation of the on-screen character. I found him really hard to shoot though. He’s such a stoic character who mainly fights, and it was tough to do anything other than him fighting. 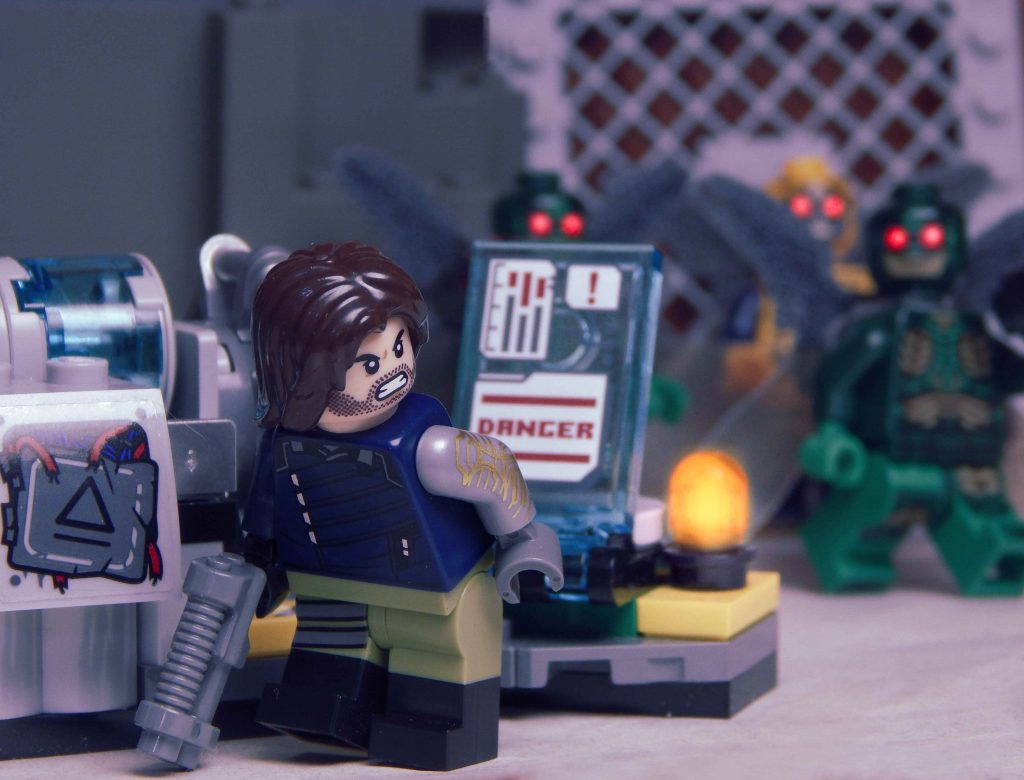 This pack is, simply put, amazing, whether for photography or display. Photography especially, since the high level of detail is consistent across all four figures. But wait! There’s a catch (a big catch). I touched on this briefly at the beginning of the review: this pack is super exclusive, very rare and sells for upwards of $60 online. The minifigures are awesome, but I don’t think they’re worth more than $35, max. You can probably find something equally awesome to photograph with that cash.