I have never been super comfortable taking toy photos out in public, especially when I travel.  I have done so from time to time, but normally when I felt I could do it and escape notice.   Its not that I am ashamed of taking photos of toys, I just dislike having to explain what I am doing while in the middle of a creative activity, and shooting in public invites questions.

After I attended last years Toy Safari in Oregon, and got some more experience shooting toys when I travel, I have been much more open about getting my toys out in public and engaging in my art. These are some of the photos I’ve taken, and lessons I learned along the way, since the last Toy Safari meet up.

I flew directly from the Toy Safari meet up in Portland to Orlando Florida to attend the PhotoshopWorld conference.  I captured this photo at the after-hours party by placing him on stage: 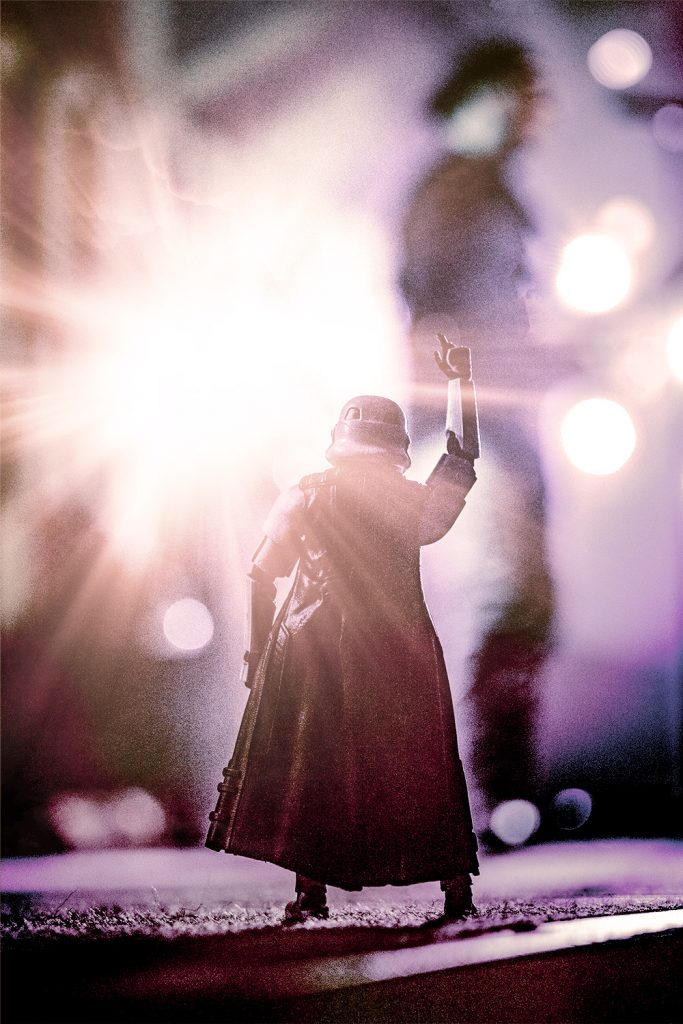 Stormtrooper rockin’ out on stage at PhotoshopWorld 2018

While I was taking this shot, the Vice President of KelbyOne, the company that hosts the conference, came over to me.  I thought I was in trouble for putting my action figure on the stage, but he just wanted to see what I was doing, and ask “Do you bring your toys everywhere?”.  To which I responded with “of course I do!”

My next major trip was in July to my homeland of Ontario, Canada, where I hung out for a week with a bunch of photographer friends.  During a photowalk in Toronto we visiting Graffiti Alley, where I captured this shot of Deadpool hanging out. 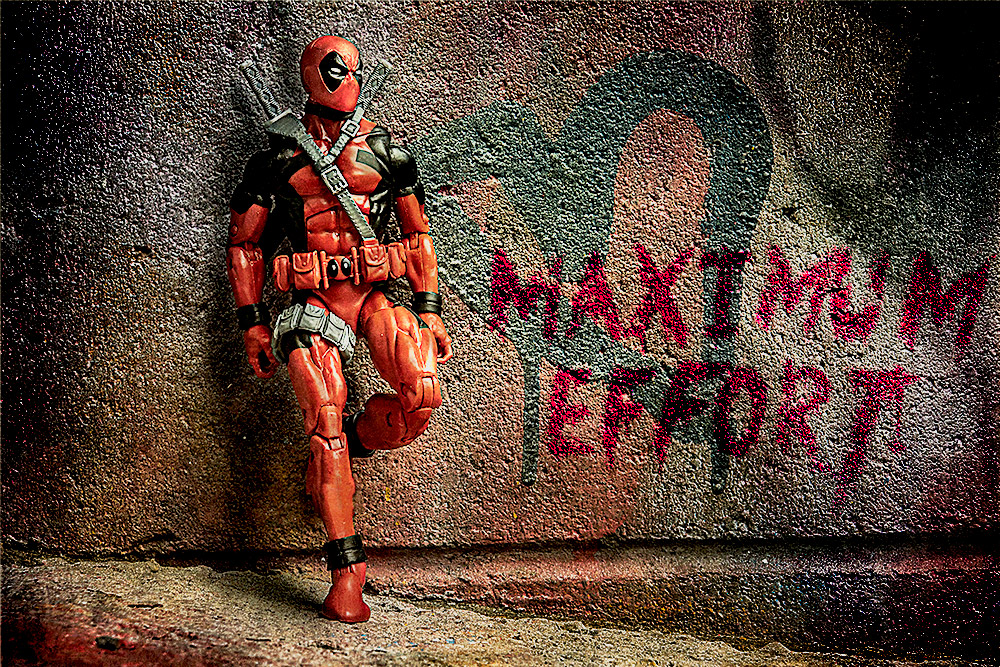 Deadpool hanging out in Graffiti Alley.

Graffiti Alley is an artists hangout, and I was with a bunch of friends who are photographers, so it was easy to get into the creative mood.  Surrounding oneself with fellow creatives is a great way to boost ones confidence when shooting in public.

In September I went to Zurich Switzerland for 10 days on a work trip.  I had some time on the weekends to travel, so I also checked out the beautiful town of Lucerne, where I captured this image over the famous Chapel Bridge. 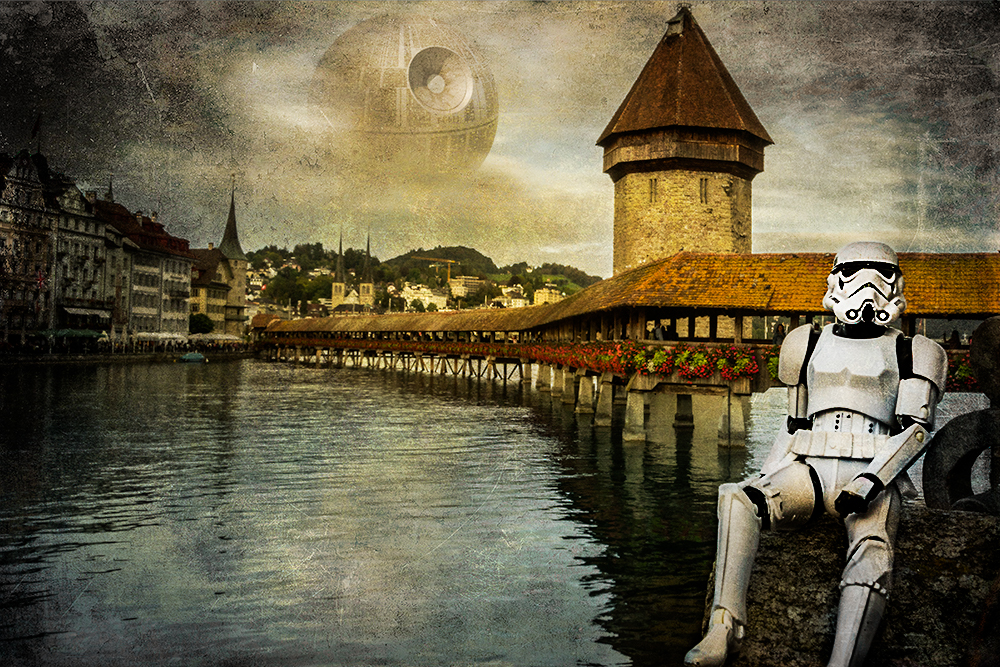 Stormtrooper hanging out at Chapel Bridge in Lucerne Switzerland.

On the same work trip I decided that I should take advantage of Europe being so small and go visit another country.  I chose Milan as I had never been to Italy before, so I booked a train ticket and spent a day there.  I decided to try out some techniques about using wire for posing (I learned at the Toy Safari) using an old archway as a background. 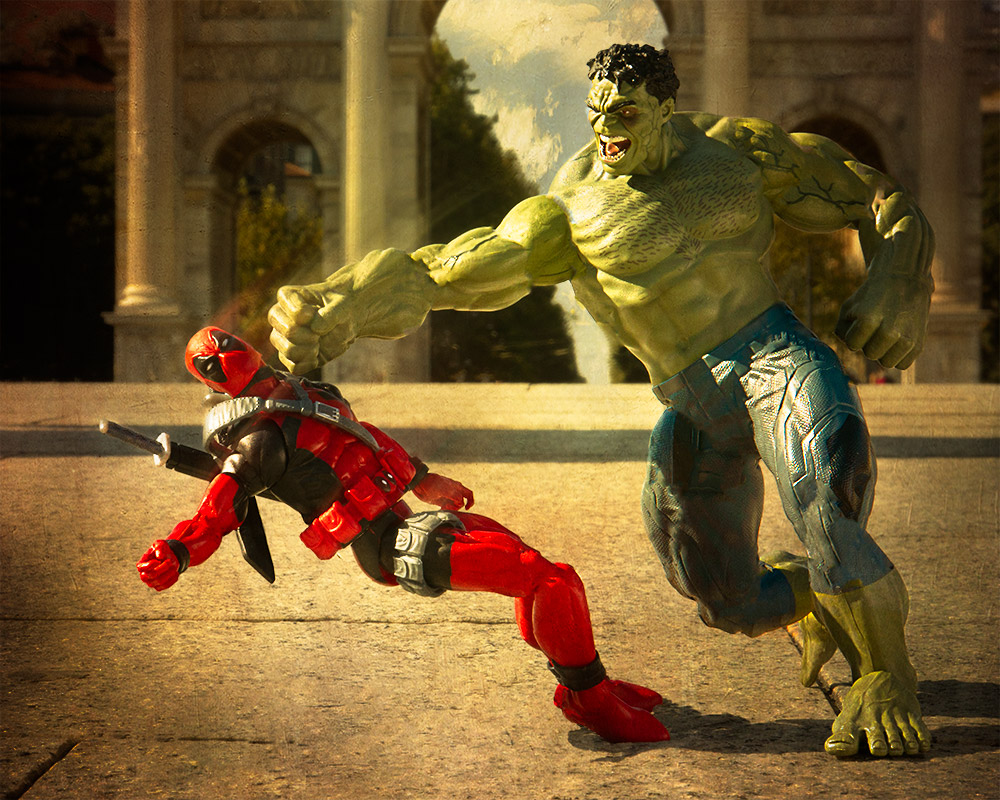 Based on the reaction of people walking by, I definitely was noticed while doing this.  I know I am in quite a few tourist shots while setting this scene up.  However they mostly left me alone, so I was able to work unhindered.  It was actually kind of nice to draw some positive attention, and it gave me a confidence boost.

Looking back on my experience, I don’t think I ever had a negative one, at least dealing with other people, while shooting toys in public.  I’ve had a lot of issues with the photography, but not the people.  Makes me think a lot of my anxiety about public toy photography is a personal issue, not a societal one.  This means I can control it, and overcome it.  I am in charge of my own destiny.

Over Christmas I took my family on a cruise to the Bahamas. Whilst hanging out on a beach on Christmas day, I took this photo of Gwenpool taking her own selfie in front of the cruise ship we arrived on.  My VAT (voice activated tripod, AKA my wife) held the figure up so I could take the shot.  I finished it while drinking a Pina Colada on the ship that evening. 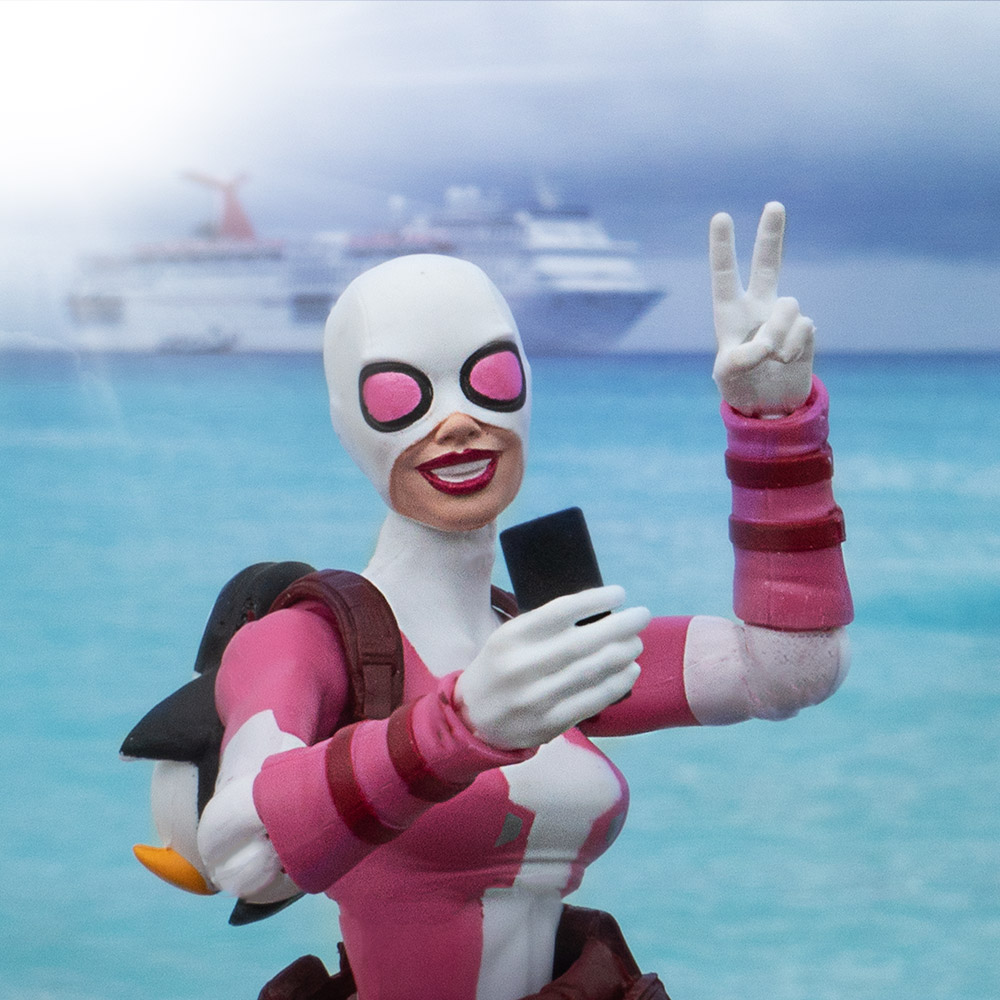 Gwenpool in the Bahamas.

If I learned a lesson here it is that, while cruises are great for taking me places I won’t see otherwise in a relaxing manner, due to the crowds it is hard to get a shot.  Also, always bring a voice activated tripod to such situations.

In January I went to New York City on another work trip.  I actually managed to go shooting with my toys a couple times.  The first time was at Cortlandt Alley (also known as murder alley as it is where the vast majority of “alley murders” in cop shows set in New York are filmed). 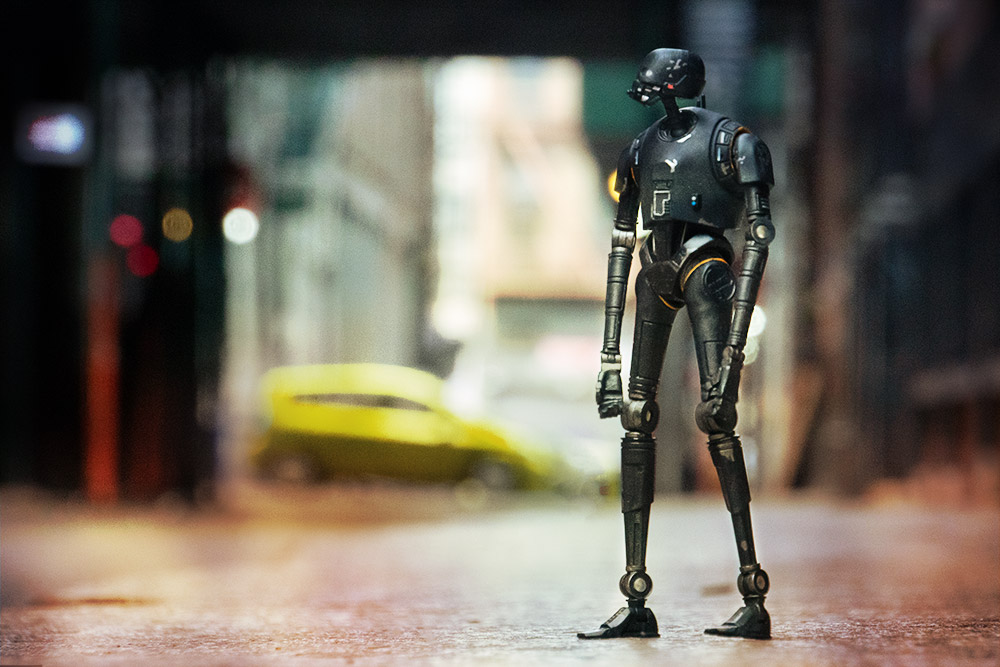 A few days later I braved the frigid weather the Polar Vortex brought to the city and hung out in Times Square for a bit. 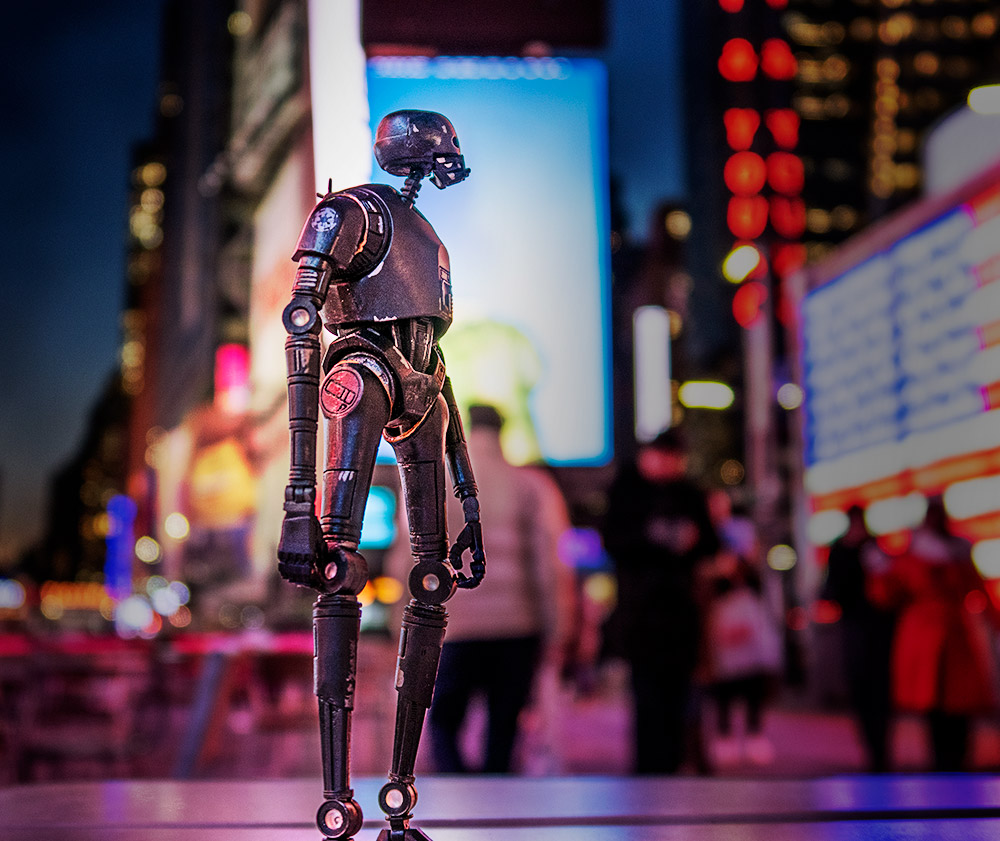 New York is a great place to shoot because folks are used to weird shit happening all around them all the time.  A dude with an action figure and a camera is hardly the weirdest thing they’ve seen.  Heck, I wasn’t even the weirdest thing in view at that moment!  As a result, despite the crowds, one can shoot toys without attracting a lot of notice.  Also going out in harsh weather like polar vortex’s, as it keeps the tourists away.

The backgrounds are epic, too.

In February I headed to DisneyWorld in Orlando Florida to bring my kids on their first Disney Vacation.  I didn’t break out the toys that much, but I did want to get this iconic shot that I had in my head since I started planning the trip. 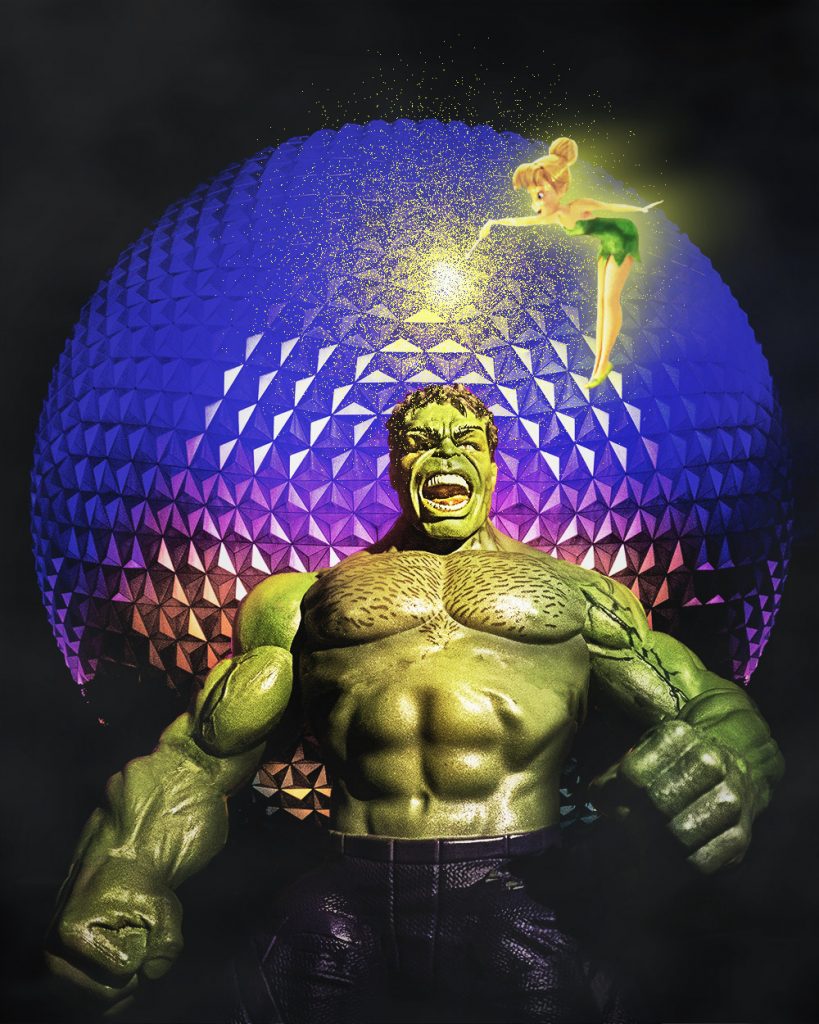 Hulk at Epcot, getting some Disney magic by Tinkerbell.

While I was taking this shot someone passing by exclaimed “Hey, that guy is doing forced perspective!”.  I yelled back “Yep!”, and kept on shooting, but it really made me more comfortable taking the time to get the shot.  Sometimes outside validation is good for the ol’ confidence levels.

It is actually surprisingly hard to find Tinkerbell in this pose with free stock photography, so I borrowed this image from one of the tourist photos that we bought as souvenirs of our trip.  It helps to shoot everything when you travel as you never know when you need an element to composite into an image, and you often can’t go back.

Just a few weeks ago I drove up to the Blue Ridge Parkway.  It is questionable if this qualifies as travel as it runs fairly close to my house, but I spent the day up there so I am going to say it is (my blog post, my rules!).  I took this shot of K-2SO at one of my favourite overlooks, Chestoa. 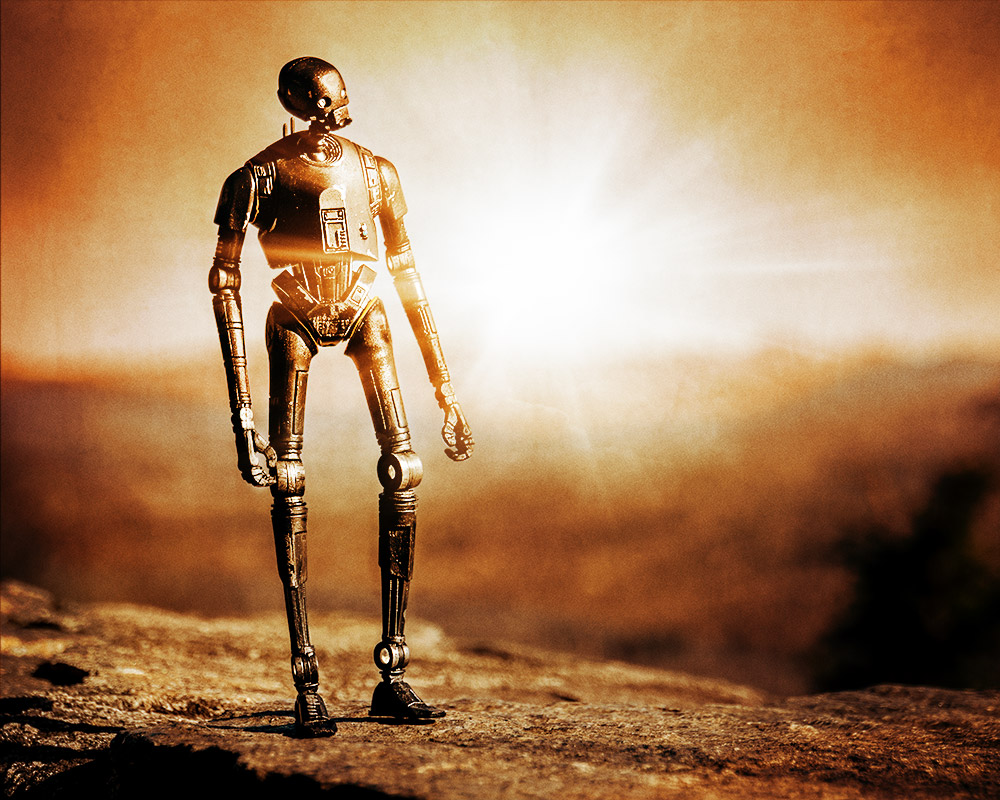 K-2SO enjoying the Sunrise over the Blue Ridge Parkway in North Carolina.

This is the last of my travels until I attend the next Toy Safari in April.  I’ll leave you with this final thought.

I love to travel. Whether for work, or for pleasure.  I love exploring the world, and seeing what is around the next bend, and over the next hill.  I am also a toy photographer, and I get a lot of personal gratification, and mental peace, by shooting toys.  While it can be hard to be bold enough to engage in our weird little hobby out in public, especially when we travel, it is well worth it.  It allows us to bring our whole selves out into the world, and by capturing the images we do, we can bring the whole world back home in a way that speaks to us on an emotional and creative level.

Shooting in public can be hard.  Do it anyway.  The rewards far outweigh the effort.