After having seen Star Wars: The Last Jedi multiple times in theatres, I came away from the experience wanting to explore the new grizzly cynical old Luke Skywalker in my artwork. Of all the characters from the original trilogy, his story arc is by far the most interesting to me. So I went in search of a LEGO set that contained an aged-Luke minifig, and settled on the Ahch-To Island Training set.

When it arrived, I handed the building of the set off to my 8 year old son, Zeke, a proud LEGO and Star Wars fan himself, so I could get his opinions of the set from his perspective, as well as my own.

This is our review.

What’s In The Box?

The set itself is small, and at 241 pieces is a quick build. The model is essentially one of the stone huts that Luke resides in on the island of Ahch-To. Inside the hut are a lot of details that are interesting: a bed, cooking supplies etc. All of the things one would expect to be inside a small occupied hut.

There are a couple simple moving parts. The back of the hut is left open for access to play, but the roof also comes off for easier access to the internals of the hut. A small part of one of the wall collapses as well. I suspect both are intended to allow for the simulation when Rey’s hut force-explodes. However it does allow for easy access for lights and smoke effects, which makes it intriguing for us toy photographers.

There is also a rock that can be split open. Remember the scene where Rey uses a lightsaber to slice open a large rock? I believe the rock in the set is supposed to allow one to simulate that. However this leads us to one of the many puzzling aspects of this model. 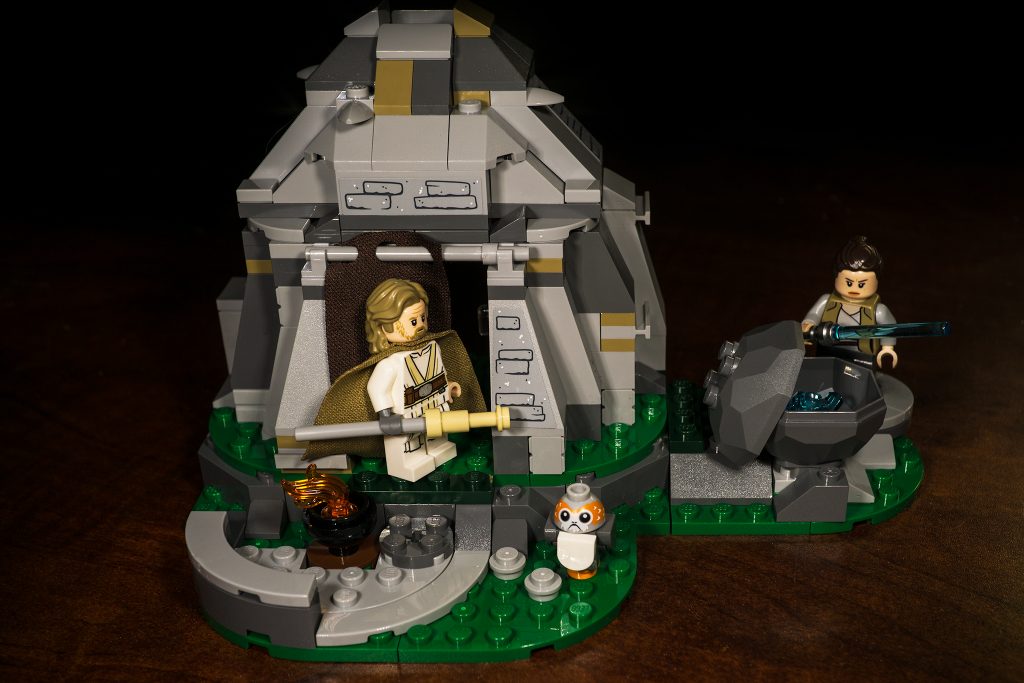 Model in my studio, as built.

In general, this model looks very little like the scenes from the movie. Aside from the three minifigures of Luke, Rey, and a porg, it feels like the model was designed based on a vague description of the location, and not from scenes from the actual movie. Basically if you handed me the model without the minifigs and the box art, I would never guess that the model was from Ahch-To (I would likely guess a left over model from Force Awakens that is supposed to be from the planet Takodana). The model makes the hut look like it is built with large light coloured rocks, but in the movie it is made from piles of small dark grey stones. The door in the movie is an impressively solid chunk of metal, but the model has the door made from a flimsy piece of cloth.

Oh, may I complain a bit more about that rock that Rey slices open with the lightsaber? In the movie she slices thru a monolithic solid chunk of rock. The model gives a relatively small sphere, that is hollow and contains a gem inside. Where the gem fits into things is a mystery to me – maybe it is something from the director’s cut, certainly not movie accurate. They could have easily made a model where that rock was realistic, and not attached to the hut so it could be located father away, but they didn’t, and that is a shame.

The true value of this set is in the minifigs. The Luke minifig comes off as the rough character that Luke has truly become. 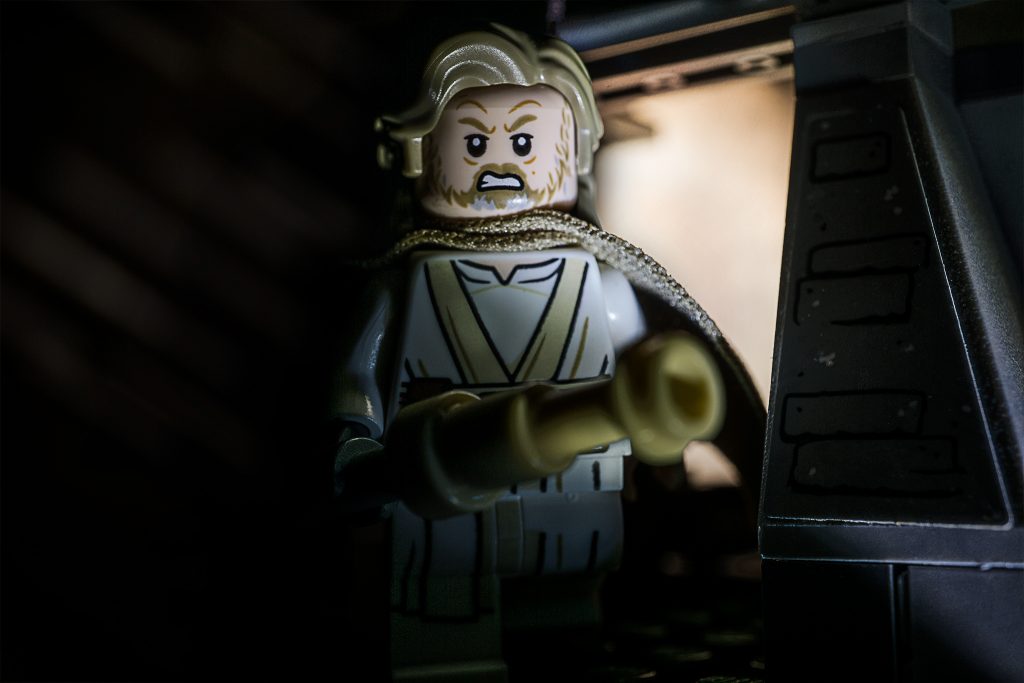 Rey looks determined and ready to jump into action. Rey’s hair piece has that cute little 3-bun combo, which is realistic to the movie. It does make it hard to turn her head for posing, but no more than is normal for any minifig with longer hair. 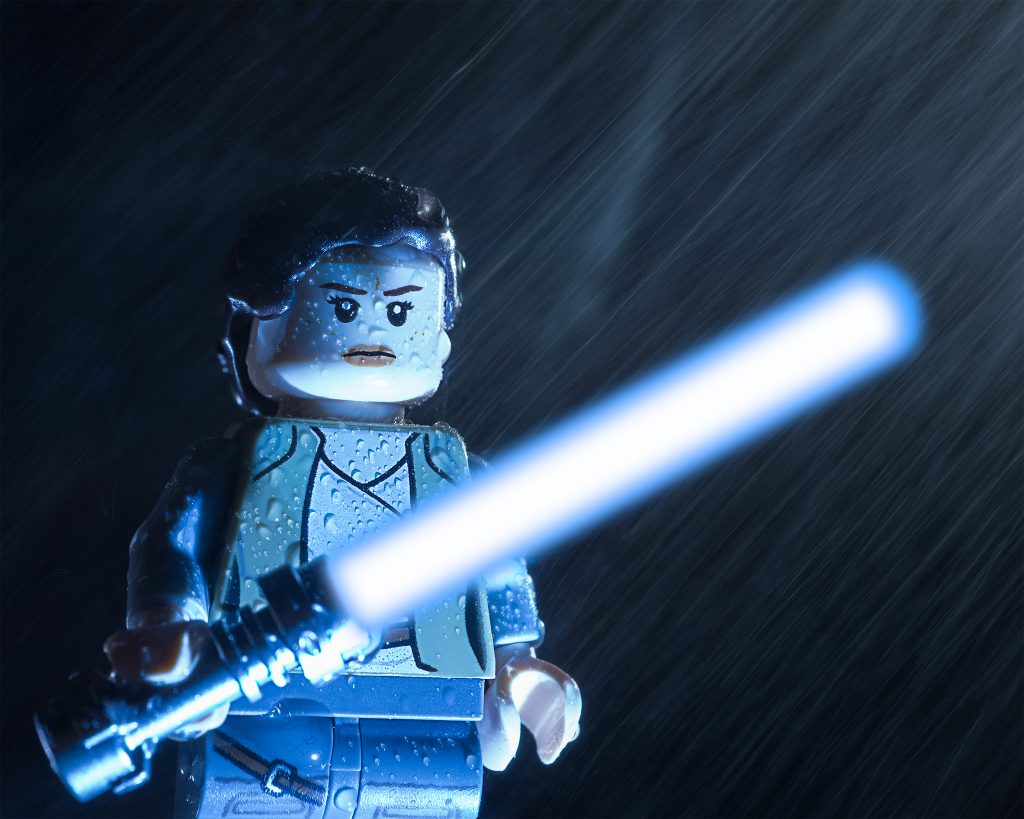 Rey is ready for action, despite the harsh rain of Ahch-To Island

The porg is adorable – I just wish they included a couple more of them. Both Rey and Luke comes with there own staffs, and there is one blue lightsaber to share between them.

From the perspective of toy photography this set is a hot mess of inconsistency. The set does allow easy access to the hut so lights can be added very easily. However it would be almost impossible to get the look and feel from the movie by using this set.

So my advice for the toy photographer is to pick yourself up a set, pull out the minifigs for your own collection, and then immediately drop the rest off in your kids toy box. They are going to enjoy it way more than you are.

About that kids toy box, here are Zeke’s impressions of the set, presented in question/answer format

How hard is it to build?
Not very hard. Easy build. Fun to build.

What do you think of the set?
It’s awesome!

What makes it awesome?
There’s a mechanism that makes one of the rocks pop up and also there is one of those pieces that spin so you can cut open a boulder.

Would you want one for yourself?
Yes!

What is your least favourite thing?
The door isn’t right, and the bed takes up too much space.

Note: Rest assured Zeke received his own set, complete with minifigs, as thanks for helping with the review of this set. He is currently in his room exploring Ahch-To with the intense imagination that only an 8 year old can provide.