Inspired by my foray into the LEGO City theme last week, I decided this time to expand my horizons and review a line of LEGO I’ve never purchased or photographed before: LEGO Friends.

The LEGO Friends theme has been controversial since it first launched in 2012, largely for being stereotypical about gender (a problem we’re still facing today even outside the Friends theme). It’s clearly marketed as a “girl’s toy,” with its bright purple boxes, wide range of pink and pastel colors not found in other LEGO lines, “minidolls” in place of traditional minifigures, and scenarios specifically targeted at a female audience. These often include boutiques, cupcake and frozen yogurt shops, and many cute animals (Bunnies, puppies and ponies, oh my).

You won’t find the various Friends characters fighting fires, going on jungle adventures, or traveling to space. Those are reserved for the “boy” sets in blue boxes on the other side of the aisle (insert massive eye roll here). It’s hard to look at the Friends line and not see the stereotyping. I’m ashamed to admit it, but this distinction has largely kept me away from them. I’ve always been more interested in the Star Wars, superhero, or Creator themes, and assumed that the Friends sets had nothing to offer me.

For my first trip into the world of Heartlake City (the fictional place in which the LEGO Friends line exists) I chose to review set 41305 Emma’s Photo Studio for two reasons. Firstly, at just $9.99 USD it’s one of the more affordable kits, meaning that my experiment, if failed, wouldn’t have been that big of a loss. I was also drawn to the promise of a photo studio with a handful of camera accessories to add to my collection. 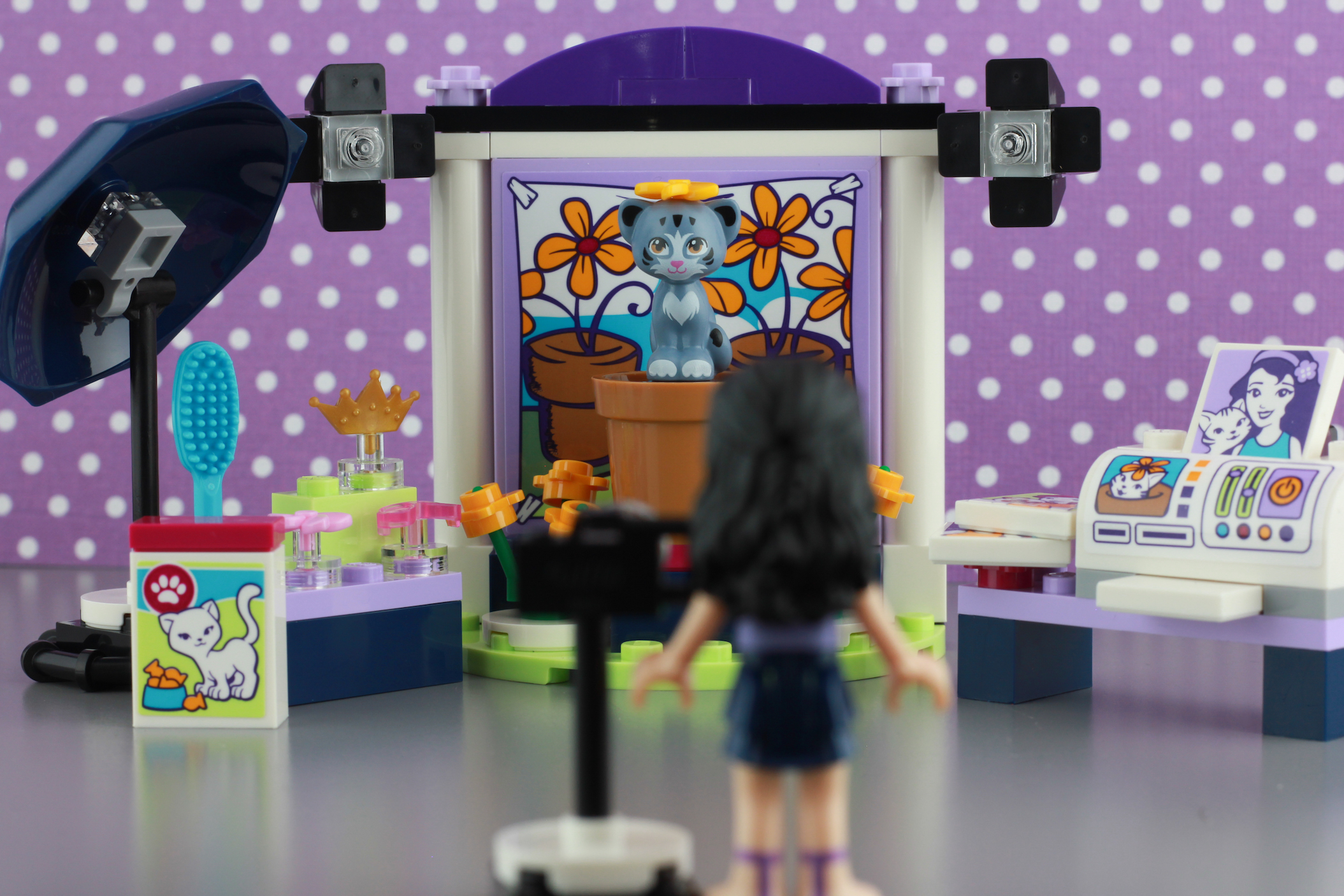 The 96 piece set comes complete with a photography backdrop adorned with yellow flowers and a brown pot on which to place Chico, Emma’s adorable bluish gray cat. Atop the backdrop are two cleverly constructed studio lights. 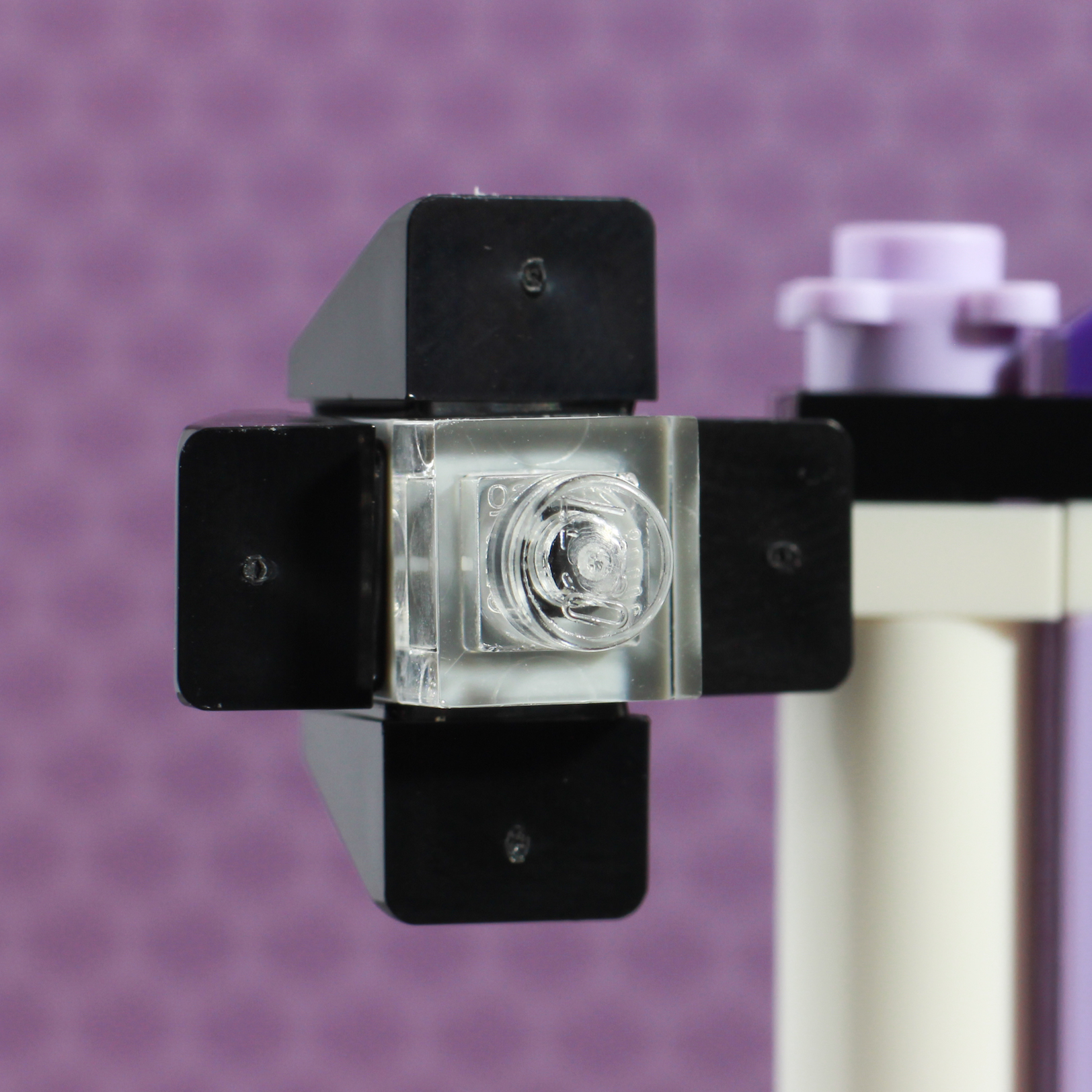 These lights show that Emma’s serious about photography

I had the most fun and success when playing with this backdrop, the accompanying umbrella light, and Emma’s camera on a monopod. While I found the purple, flowery backdrop itself highly limiting for photography, I discovered that with a bit of modification, it provides an excellent base for a photo studio. 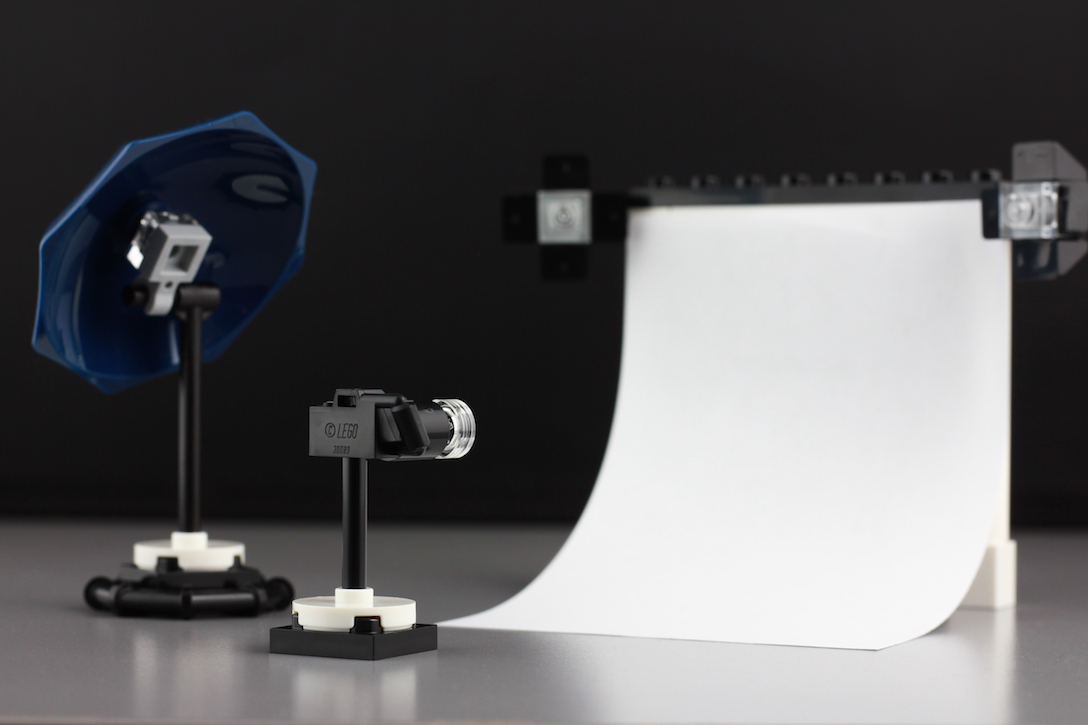 Alternate setup #1: Now THAT is a professional setup! 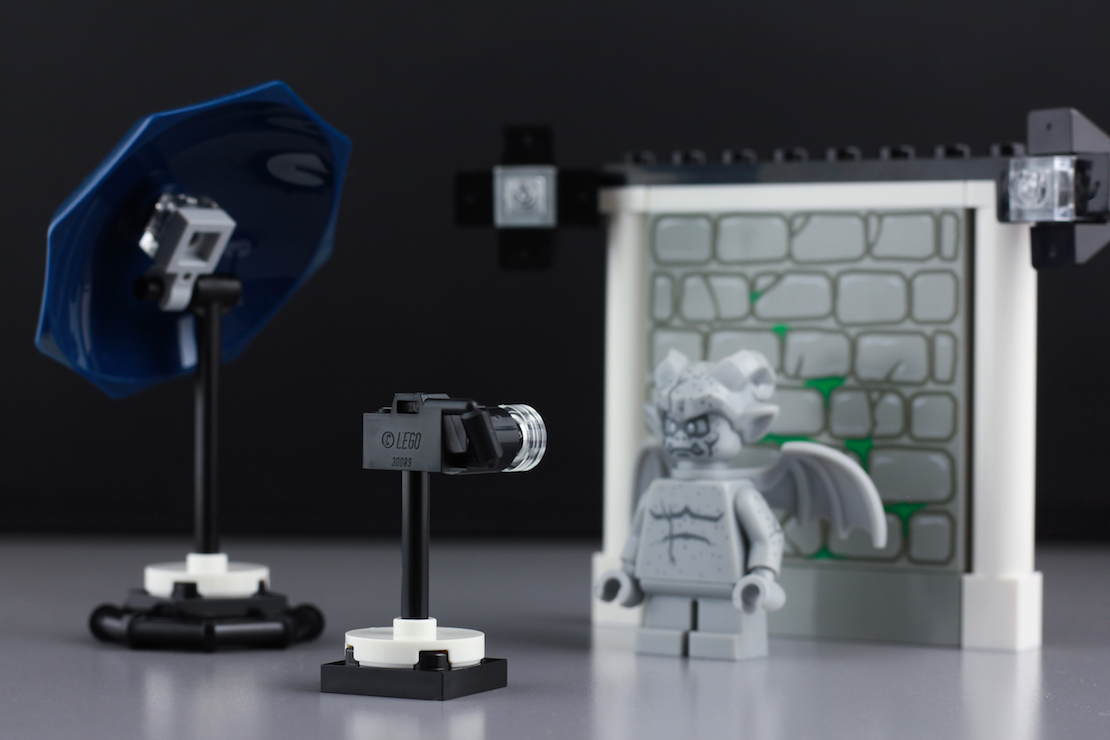 Alternate setup #2: Simply replace the purple backdrop with a different piece that rocks.

The umbrella piece was my favorite of the entire set. While dark blue instead of the traditional white or black, it takes the photo studio aesthetic to the next level, and is useful as a plain ol’ umbrella as well! 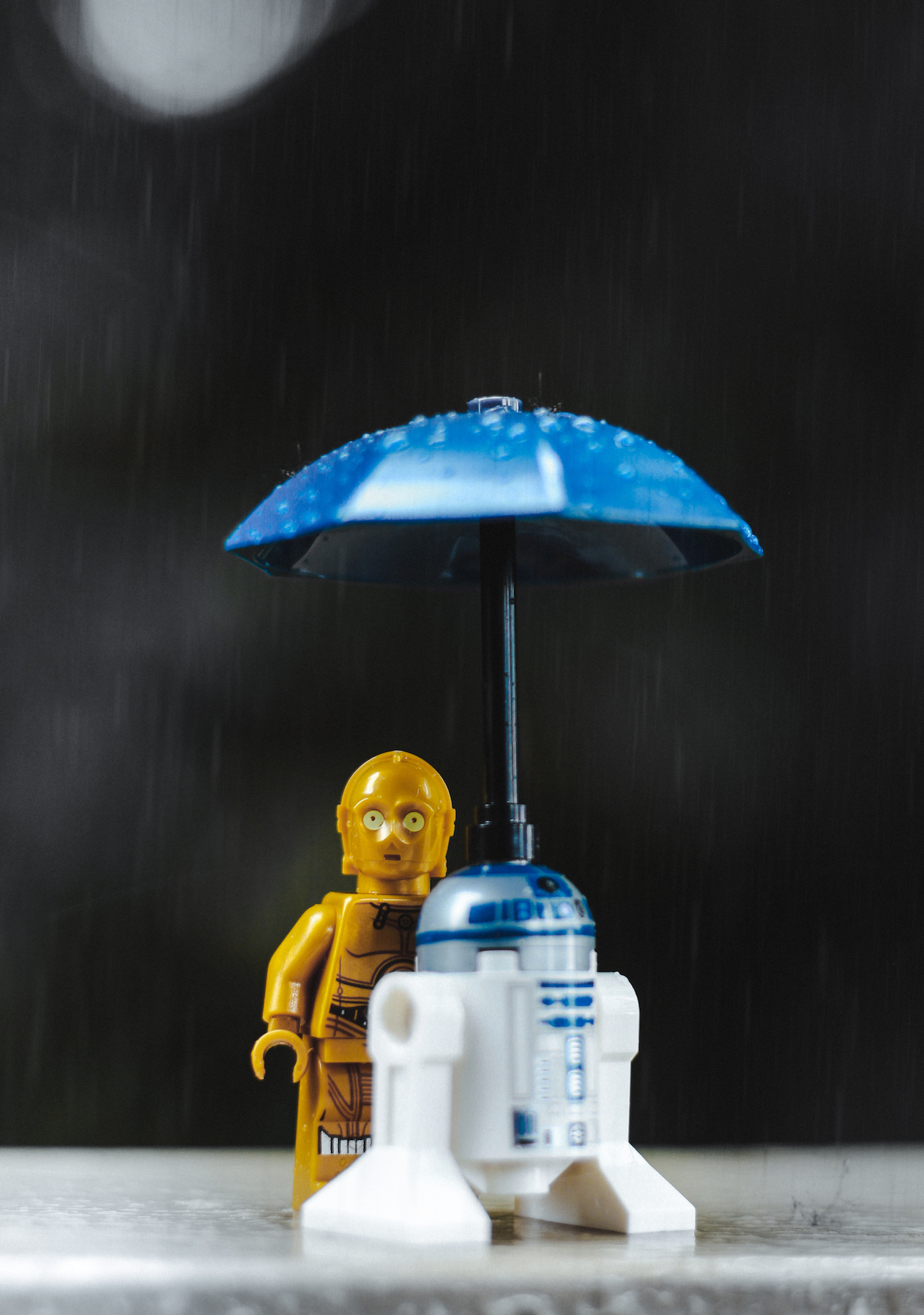 R2 really does have a gadget for every occasion

I was less successful with the other two builds in this kit, Emma’s photo printer and beauty/grooming station. At first glance, I thought the printer would be more versatile, but the colorful buttons and cat photo on the front sticker are pretty limiting. 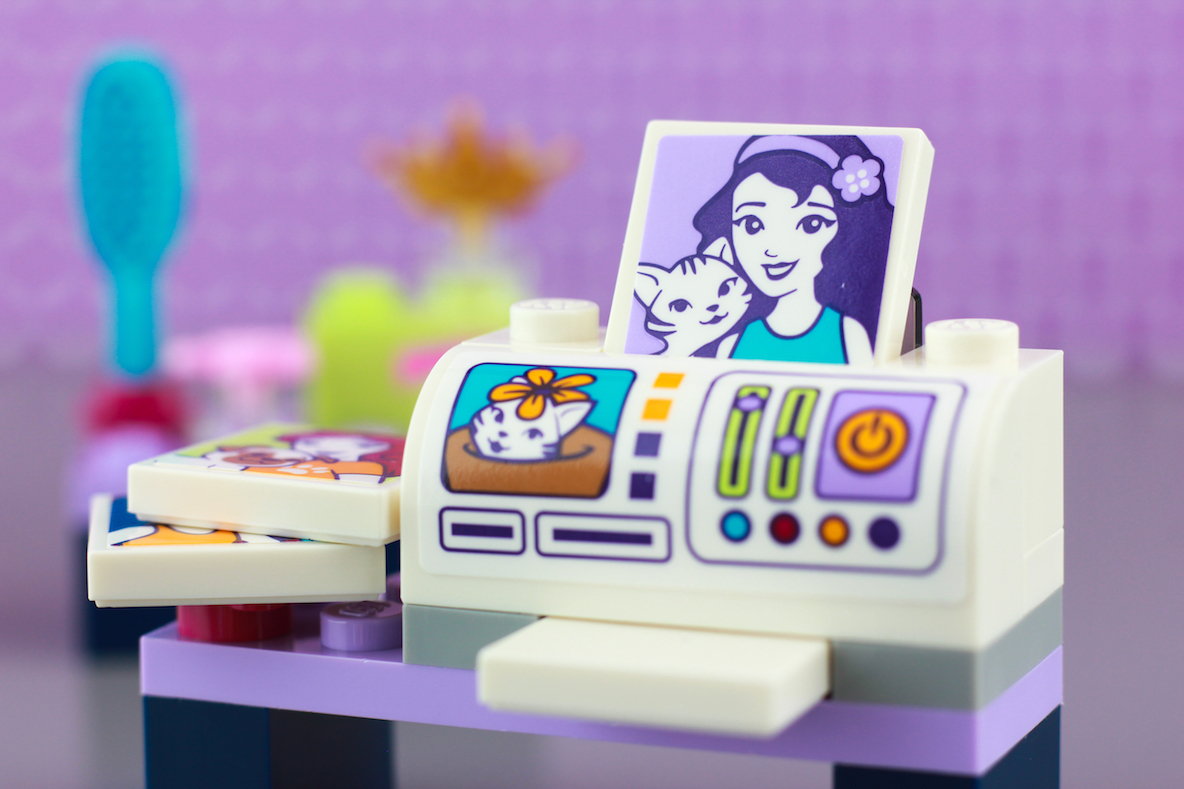 For the purposes of this set, the printer is a great touch. I love its basic construction, so I think I’ll try modifying it for future shots. 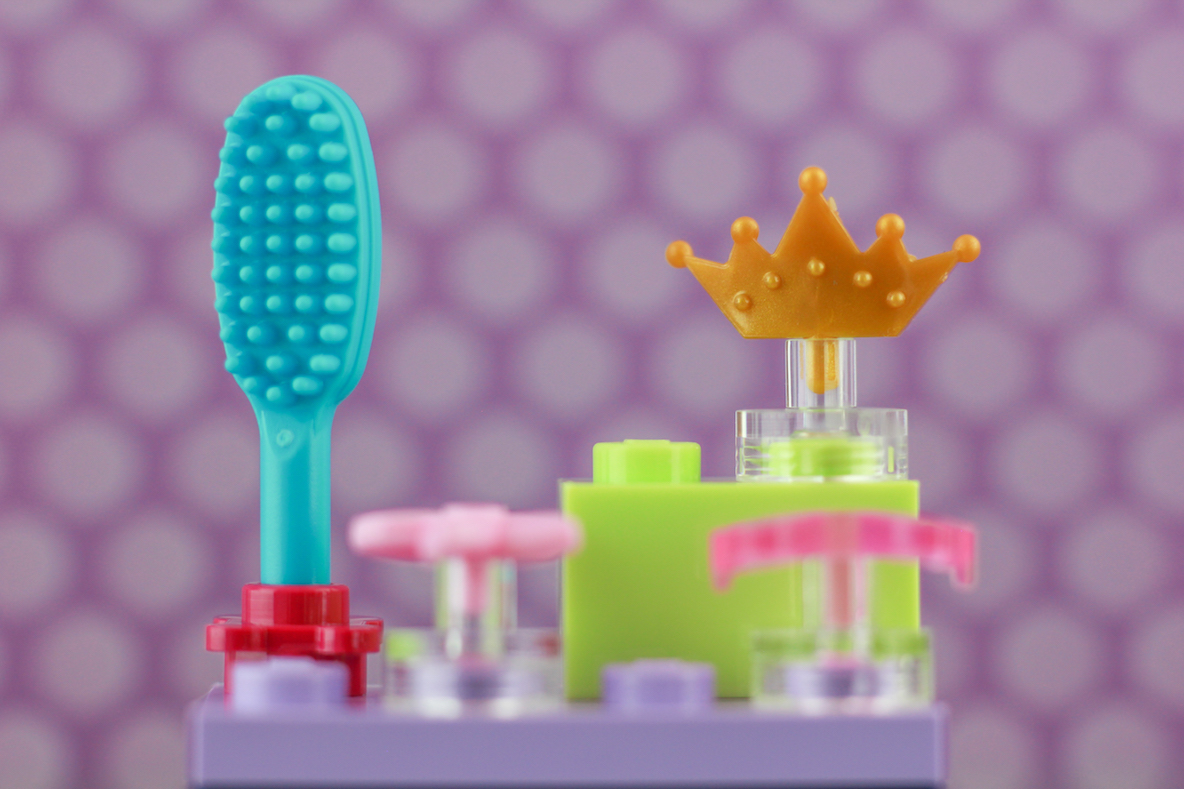 The grooming station fits the set well, and while I didn’t get any great test shots with it, I am looking forward to playing around with its accessories, the blue hair brush in particular. I’ve found that the accessories will be the largest allure for the Friends line for me in the future. You simply don’t see accessories like this in the Star Wars, Creator, or even LEGO City themes. 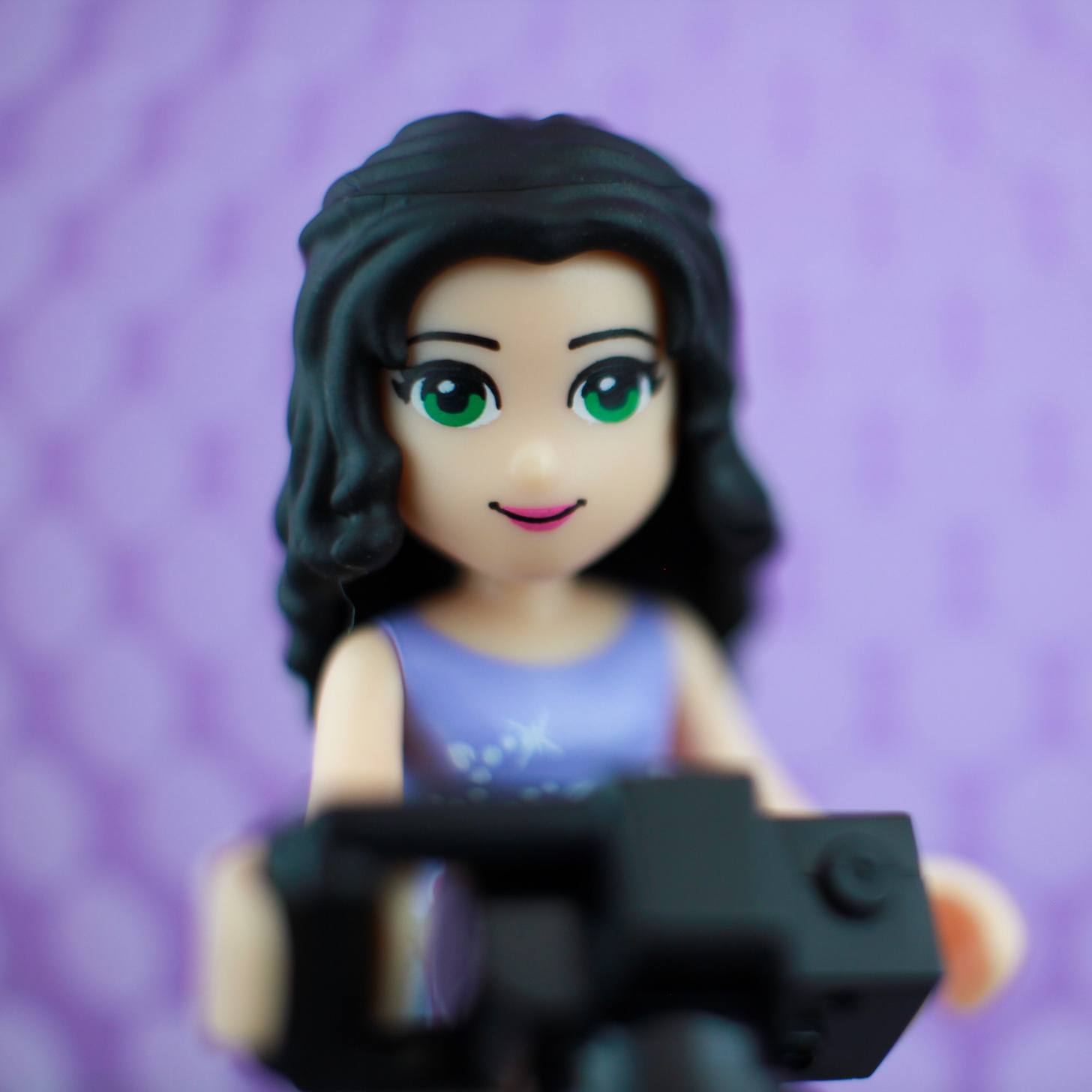 The most off-putting aspect of the LEGO Friends line for me is the use of “minidolls” instead of minifigures. I simply don’t like their design, and find it frustrating that the LEGO Group thinks it necessary to create a different version of the classic minifigure that’s specifically “for girls.”

For starters, the legs don’t move independently, they both move as one and only in one direction: forward. I guess minidolls don’t walk, they simply sit or stand. Second, the arms are thinner and angled differently than a minifigure’s, and look a bit awkward when extended. Gone too are the round heads, replaced instead with humanoid faces with noses and large eyes. I’ve always liked skin-toned LEGO pieces, and actually like the detail in the facial features. But… these minidolls just don’t look like true LEGO to me. 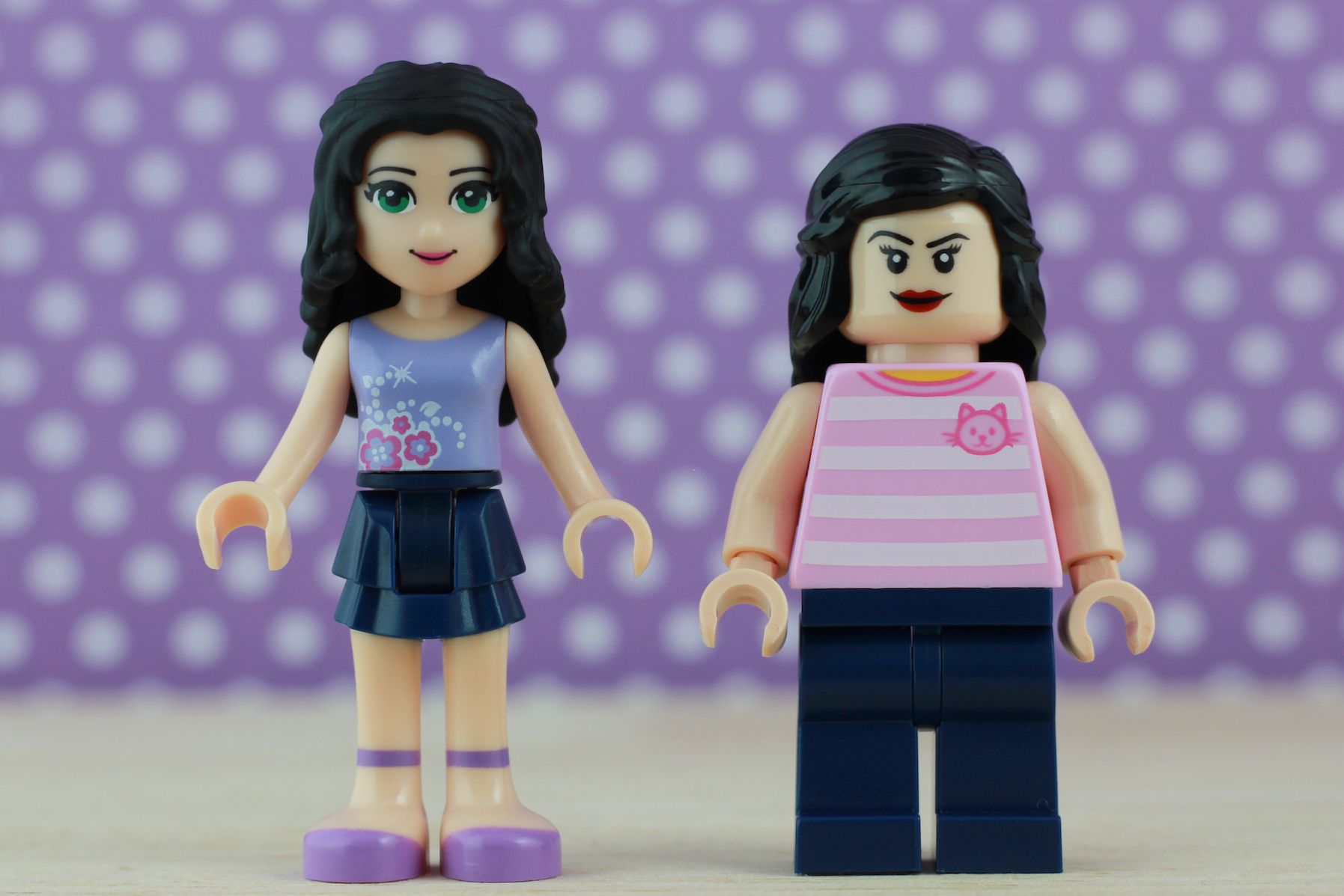 I found Emma to be difficult to photograph, and doubt I’ll find an occasion to do so beyond the confines of this review. I do adore her hair piece though, which will fit traditional minifigs, so keep a look out for that in the future! 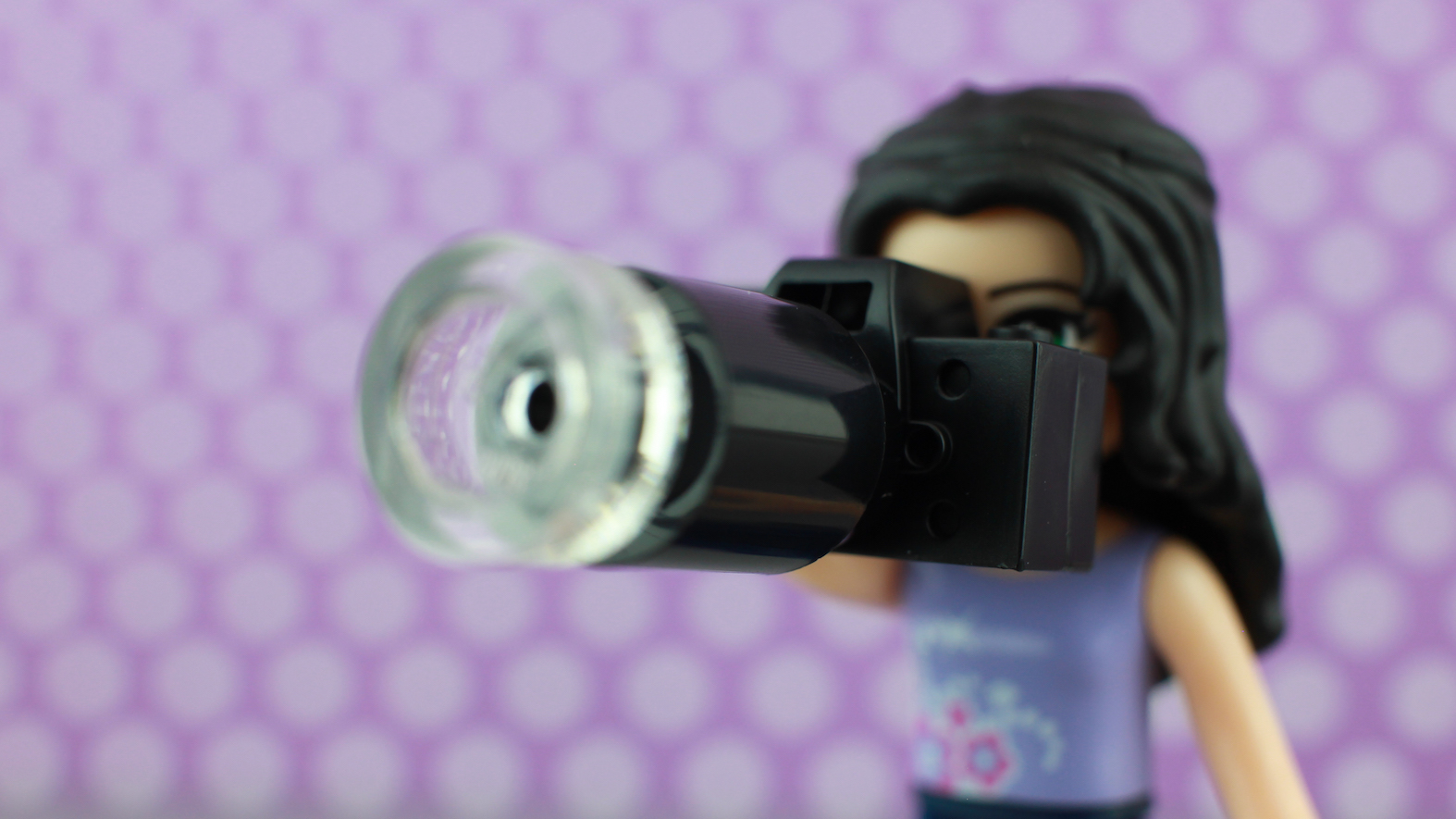 Emma’s got a nice camera too!

Chico the cat is the true star of this set (he is, after all, the subject of Emma’s photos!) and I found him far less frustrating than Emma herself. His design is much different than the cats in other LEGO themes, which I notice to be true of all the animals in the LEGO Friends line. He’s not only posed differently, but has a small hole on top of his head allowing for accessory placement. Emma has a few of them on her hair piece as well. 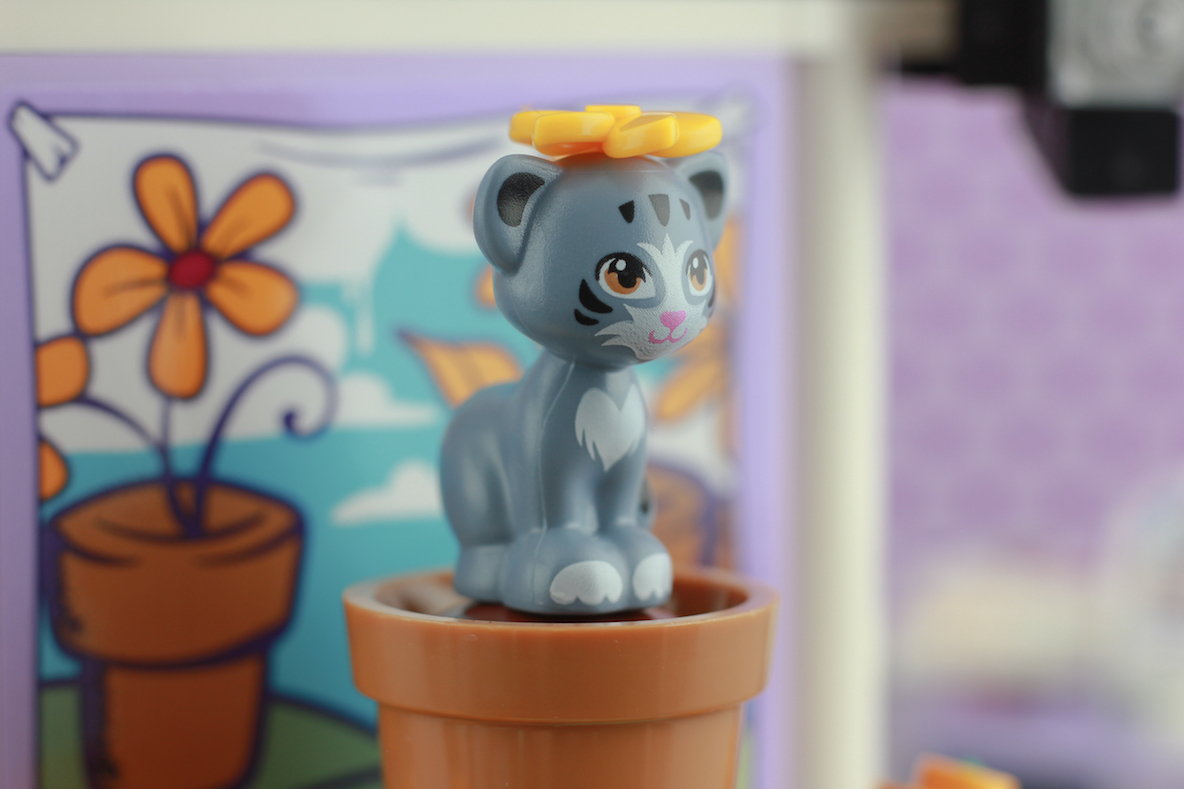 Chico sits atop a flower pot piece that I will definitely be swiping from this set to use in future photos. He also comes with a box of cat treats, which I had fun photographing. 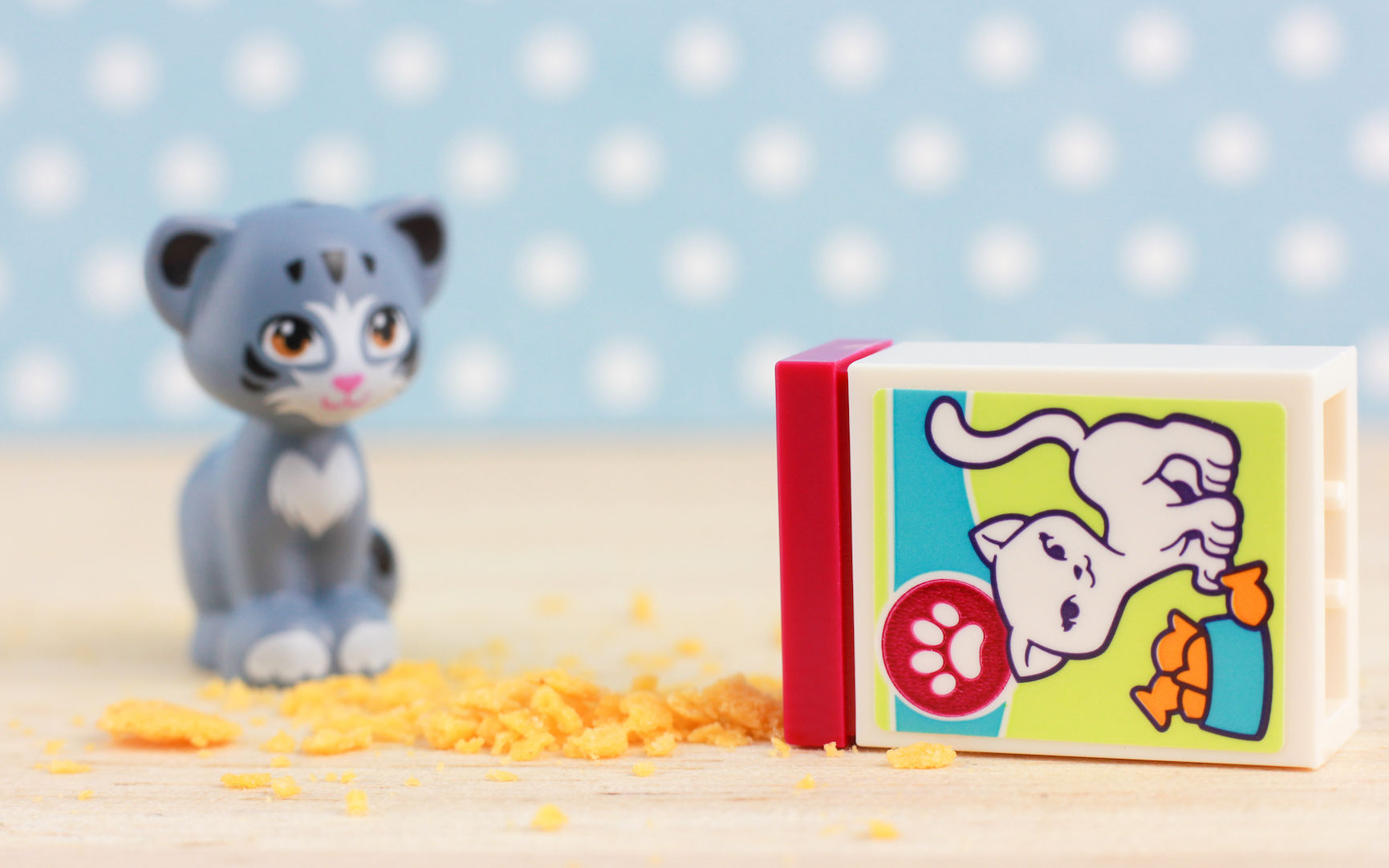 I’m excited to add Chico to the menagerie of LEGO cats already in my collection. You can bet that I’ll be keeping my eyes peeled for other interesting animals in the Friends kits. While mainly adorable, I found that his pose lends itself to more dramatic shots as well, specifically his tail. 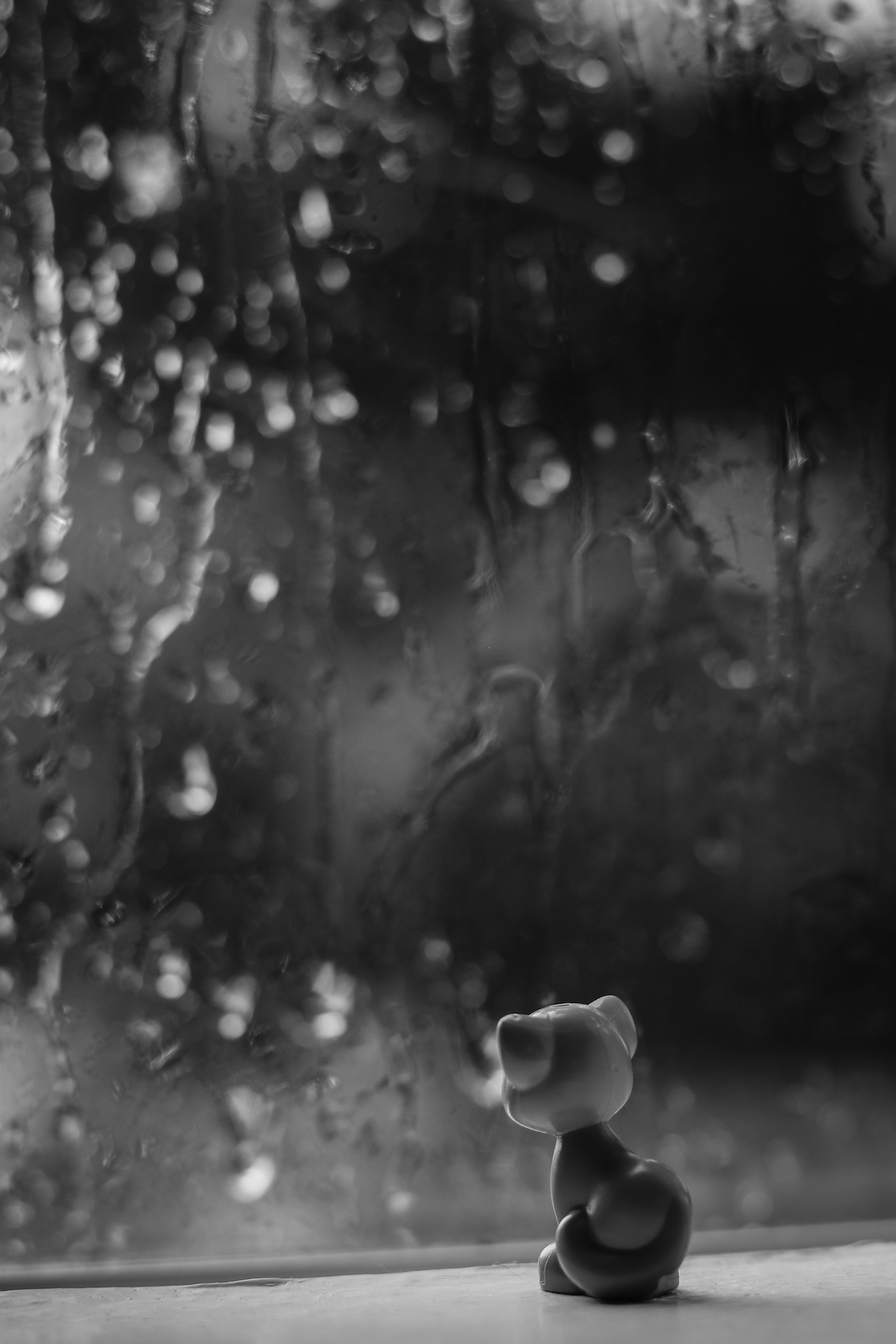 So, has 41305 Emma’s Photo Studio changed my mind about LEGO Friends? Not really. However, it has placed the entire line more firmly in my radar. I’ll try to be less dismissive of it in the future, mostly for its animals and accessories. I also now have my eyes on several larger sets, in hopes of tweaking them to fit my particular style.

Have you found success photographing the LEGO Friends line? What do you and don’t you like about this controversial theme? Leave your thoughts in the comments below!

For more reviews and interesting articles related to toy photography, sign up for our weekly email round up where you’ll get a recap of the week’s offerings.

And while you’re doing things, you should definitely join our G+ Community where we hold monthly contests with prizes and lots of other cool stuff too!