Taking pictures outdoors is a great and funny thing. You choose from the seemingly ordinary reality the pieces that are becoming new worlds through camera lens and thanks to your imagination. It could be another planet, the Wild West or other exotic place. Besides, you can catch some sun, breathe fresh air, meet other people… erm, wait.

Yeah, meeting other people. It’s difficult to avoid them when taking pictures outside, unless you shoot in the Death Valley or in distant areas of Antarctica [I’m sure there may be some people to be found there though]. Don’t get me wrong, I’m not a misanthrope [or at least I’m in reasonable proportions] and people do not bother me unless they go through the frame. However, both the toyphotographers and passers-by have different sensitivity. And that sensitivity does not always overlap.

It’s funny, how many types of emotions can arouse a man taking pictures of Lego bricks on the sidewalk, or on a park bench. From the very positive ones, which is understandable, to the negative, which is not so understandable. These are not a problem when you enjoy toy safari with other toy photographers, cause nec hercules contra plures, but it could be a problem when you’re alone. 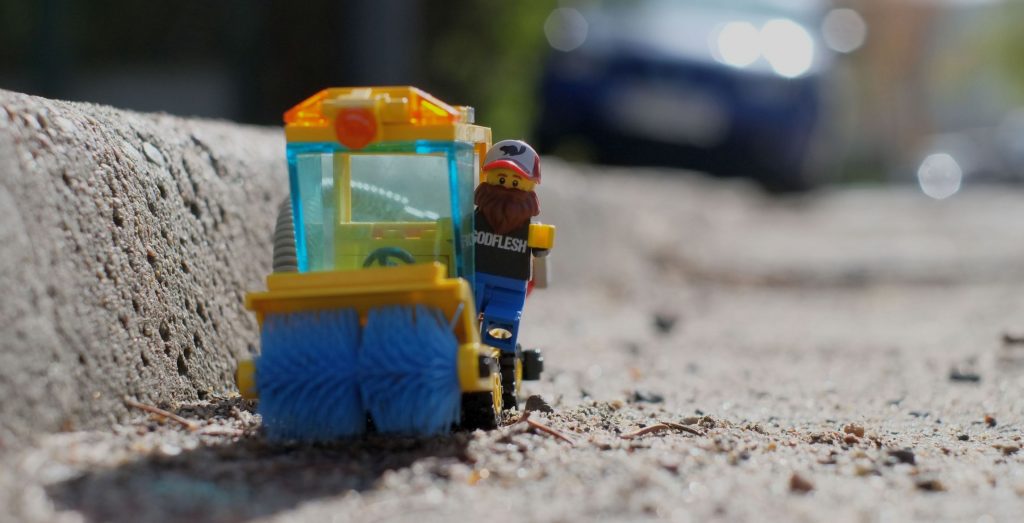 Cleaning streets for some clean shots!

Probably many of you, if not everyone, have seen a reaction from passers-by when taking pictures outside. During my very short “career” of outdoor photographer I’ve experienced most of them.

When I started taking pictures outside the house I hesitated a little; I had doubts. How would I feel and how would I be seen by others? But a moment later I said: Hey, what am I afraid of? I do not hurt anyone. So “move along, nothing to see here”. Wait! Actually there’s a lot to see here! But to see it, you have to get closer. And there were some who were getting closer. “See mom, this guy is taking pictures of Lego minifigures!” or “Haha, nice!” or “Oh! Lego!” These sentences and alike were the most common. Once upon a time the kids came up to me and we even played with Star Wars minifigures on the bench. Their mom looked at me suspiciously for a moment, but when I did not start telling them about the Force, Jedi, or about other religion she seemed to calm down. I also experienced many positive reactions on the beach. You know, sun, holiday, fresh breeze and water. And Lego – the humor immediately improves. 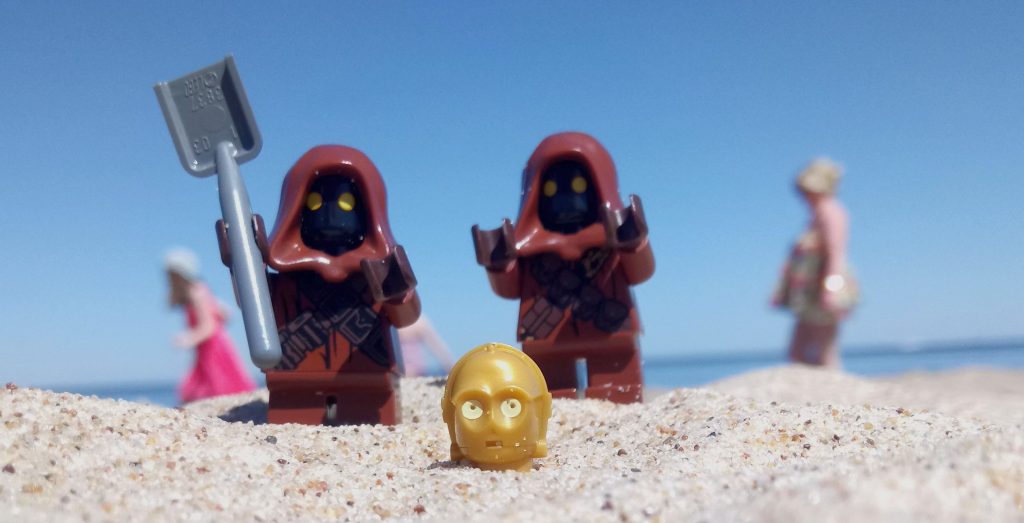 – Utinni!* *move along, nothing to see here – No! Good people! Please come back! Help the poor protocol droid in oppression!

Probably there were many reactions that I have not even noticed. As I mentioned, I was concerned at first, but the fears evaporated when I looked in the viewfinder of the camera. I just forget about the environment and I focus on this small piece of the world in the lens of the camera, or actually on the completely different, new world, to which this lens leads.

So I have no reason to complain. Although, as I mentioned earlier, I also experienced negative reactions. I heard blowing raspberry, I saw a few smiles of pity and the like. Once some grilling people joked that I was taking pictures of the dirt, cause they were too far to see the minifigures. Okay, it was even funny. There was also a less amusing situation that I turned into a joke.

I was preparing for a “sharkception” session, and I did a photo shoot at the fountain near the university. I was kneeling, taking pictures, people was passing me by, water was splashing nicely. And suddenly I felt that somebody is standing behind me. I raised my head and there was a about 50-year-old university guard staring at me behind his mighty mustache.

– Adult man is playing with toys… – he said with disapproval.

He stood for a moment, made sure that I did not drink or steal the water from the fountain, nor did I intend to destroy it and he walked away in silence.

I’m not good at giving advice, I do not even pretend to be an advisor, but in my opinion an insistent commentator should be put off with laughter. Because yes, we play! Finally Lego name comes from phrase “Leg godt”, which means “have fun”. Regardless of age.

Do you have any unusual or improbable stories of taking pictures outdoors? What are your ways to deal with people? Or maybe it’s just me and I’m bloating the whole thing?