As promised a few days back, here is my Collectable Minifigures Series 17 review…

OK, I can hear the moans. “Not another surfer?” Sure, we haven’t had one since the Series 4 Surfer Girl, and before her the Series 2 Surfer, but I get it. There’s nothing spectacular about this figure. He’s a Professional Surfer, and comparing him to a regular Surfer from Series 2, I guess a wet-suit makes you  a professional? Speaking of the wet-suit, the print is similar to the ‘Coast Guard City’ Surfer, but with printed arms. 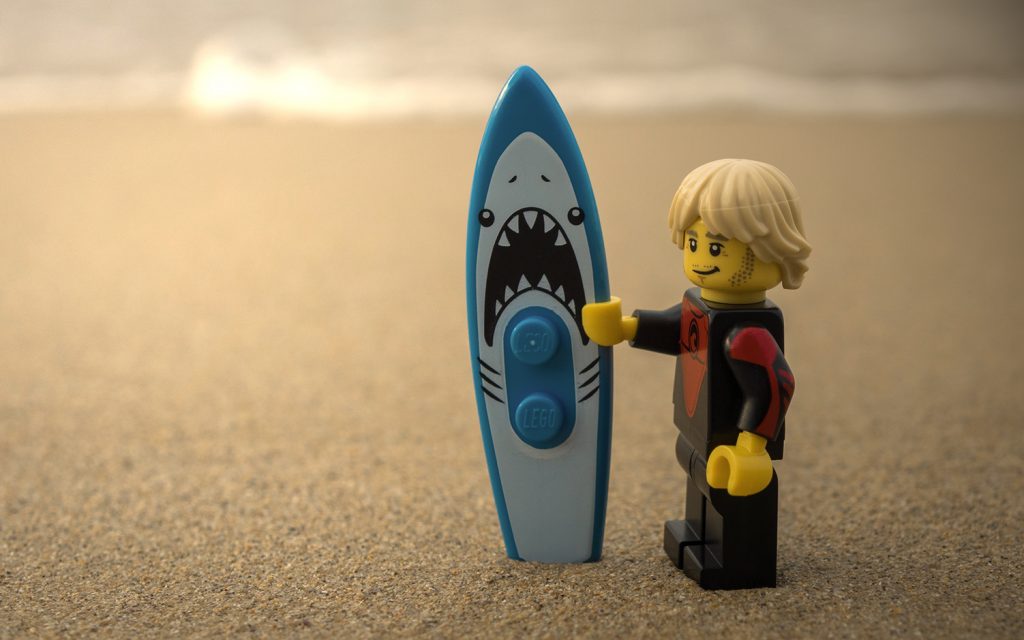 The surfboard ‘shark’ design is pretty rad though! I’ve already planned shots with the Series 15 Shark Suit Guy and this board. It looks like it was custom designed for that Minifigure.

Dressed in a classic chef’s coat with black buttons on the front and on the sleeves and printing on the front of the legs that extends the coat, this little Chef is ready to whip up some culinary treats. And what better way to do than by using the new whisk accessory?

She’s put that whisk to good use whipping up a pie with six strawberries printed on the top. 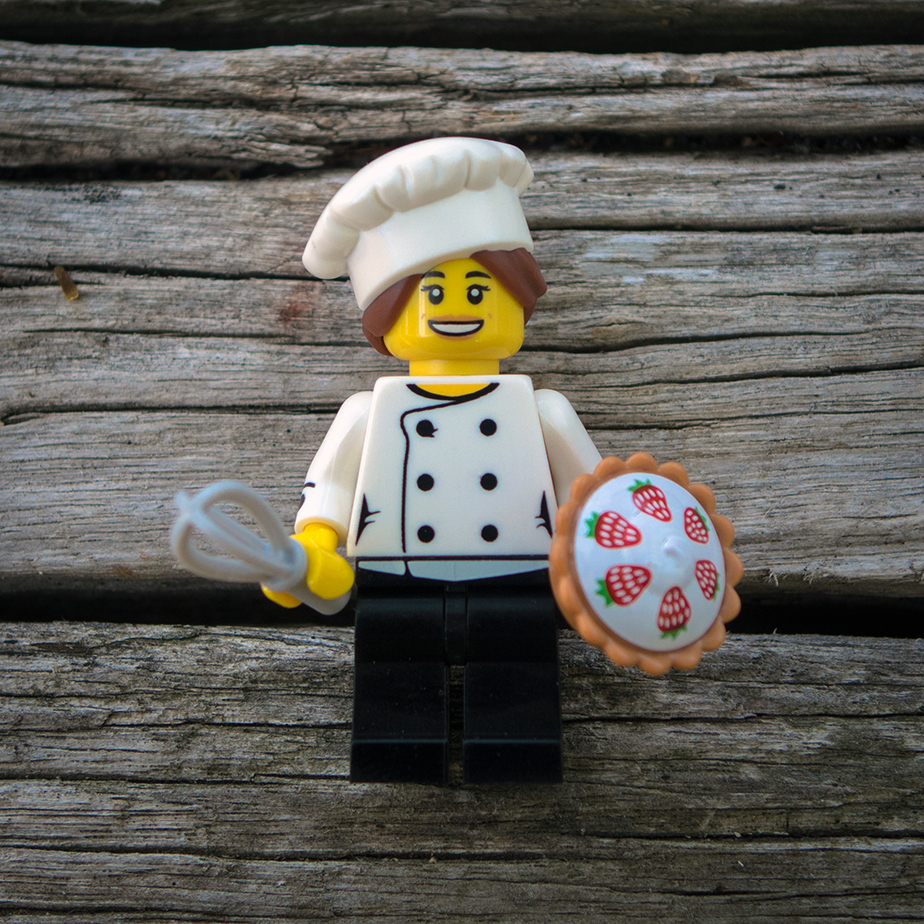 Her chef’s hat sits over her hair tied back in a bun, and atop the only double-sided head print in this series; one side a grin and the other a smile.

I’d smile too if I had a six strawberry pie!

The ‘Town’ and ‘Speed Champions’ Hot Dog Vendors get an upgrade!

With his cheesy grin and freckles sitting under his little paper cap as seen on the Series 6 Butcher, but this time with red trim, who wouldn’t want to purchase a hot dog from him? A white bowtie and red short-sleeved shirt sit under his red and white checked apron with a smiley badge pinned to one of the straps. 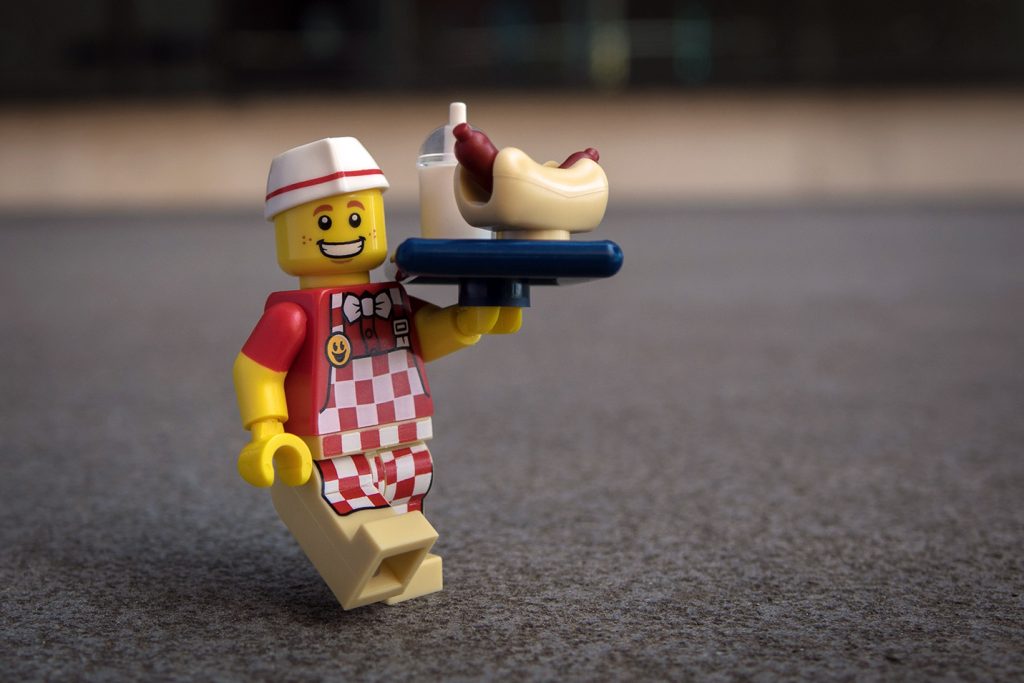 He carries a new dark blue rectangular tray with a shake and a hot dog on top. The shake is similar to The Simpsons Suishee with its straw with trans-clear lid, but no printing. There’s also a hotdog in a bun. Not just any hot dog, it’s a new hotdog colour! 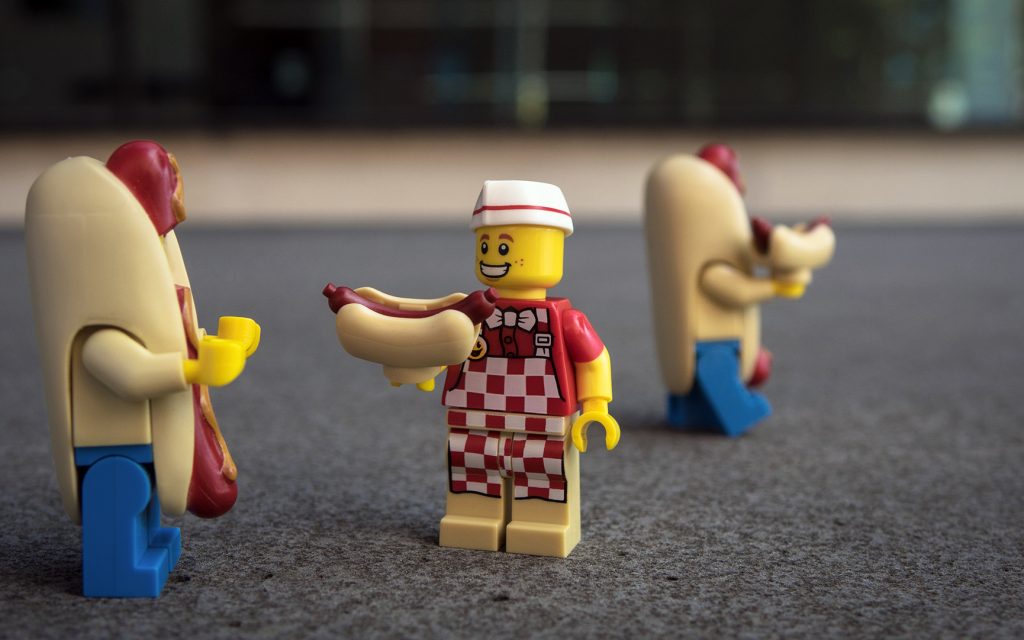 Yep, those who know my love for a LEGO wiener will understand my glee upon discovering a dark red hot dog, to add to the red, flesh, black and sand blue ones!

I’ve never been a huge fan of the Minifigures with the 2x2x2 slope brick instead of legs. Playing with them (yes, I play with my LEGO!) they clump around on their monopod, like a clumsy Godzilla with its legs manacled. Shooting them throws up additional challenges, battling angles and reflections.

That being said, the details on the Elf Girl are pretty cool. 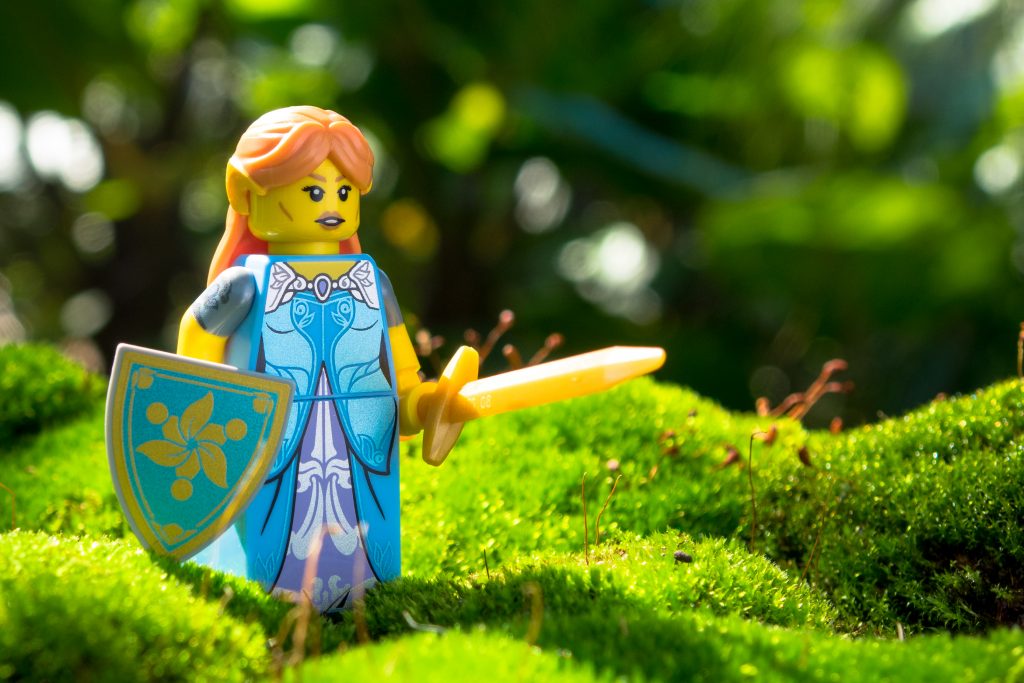 The dress and bodice print that continues from the torso to the slope is wonderfully detailed with floral patterns in light blue and silver. The silver patterns with lavender gemstones details on the sleeves are great. Her hair has a silver star woven into the braid at the back. 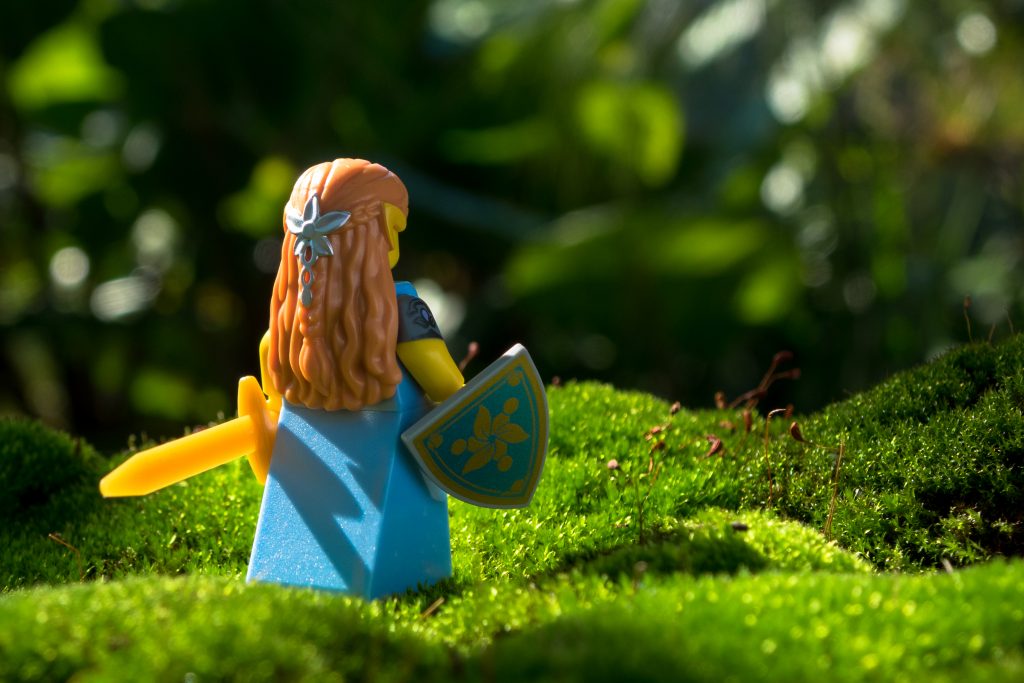 Armed with a sword and printed shield, her expression leaves me wanting. It feels too “middle of the road”. Maybe if she was either more angelic to compliment her attire, or more foreboding to match her weaponry, I’d identify with her more?

It’s a classic Circus Strong Man, straight out of the circus sideshow. The leopard print leotard, the weight belt, black boots and a handlebar moustache that could probably lift the 200lb weights all on its own, are all instantly recognisable as the iconic Circus Strong Man! 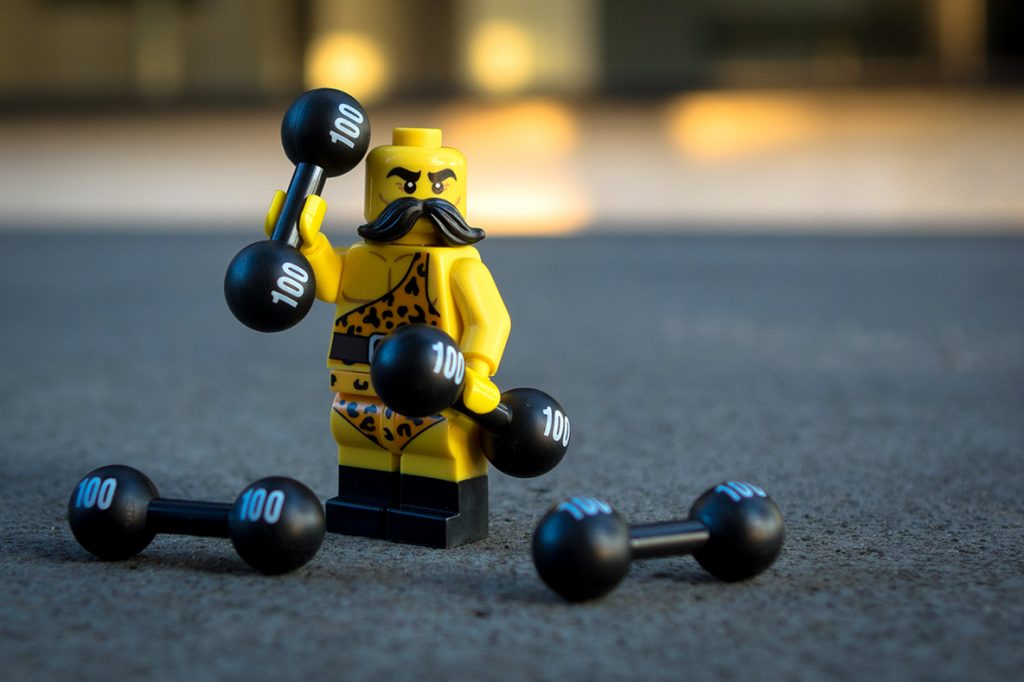 And then there are the weights. They’re straight out of any classic circus scene, one piece, and completed with the printed weight of ‘100’ on each, making the whole thing 200lbs. Or so the Circus Strong Man will have you believe! 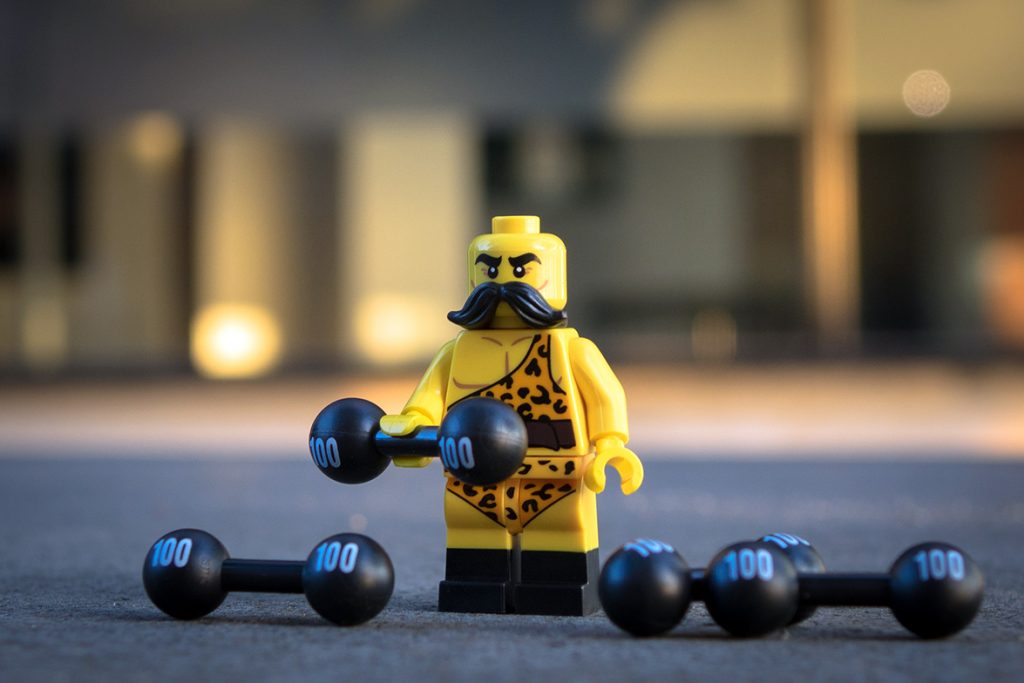 The 80s called, they want their Minifigure back!

Wearing a white suit, with the sleeves pushed up, over a pink polo shirt, this guy is straight out of an episode of Miami Vice; the good 80s version! Aviator sunglasses and smug grin sit beneath black hair with possibly too much product in it. 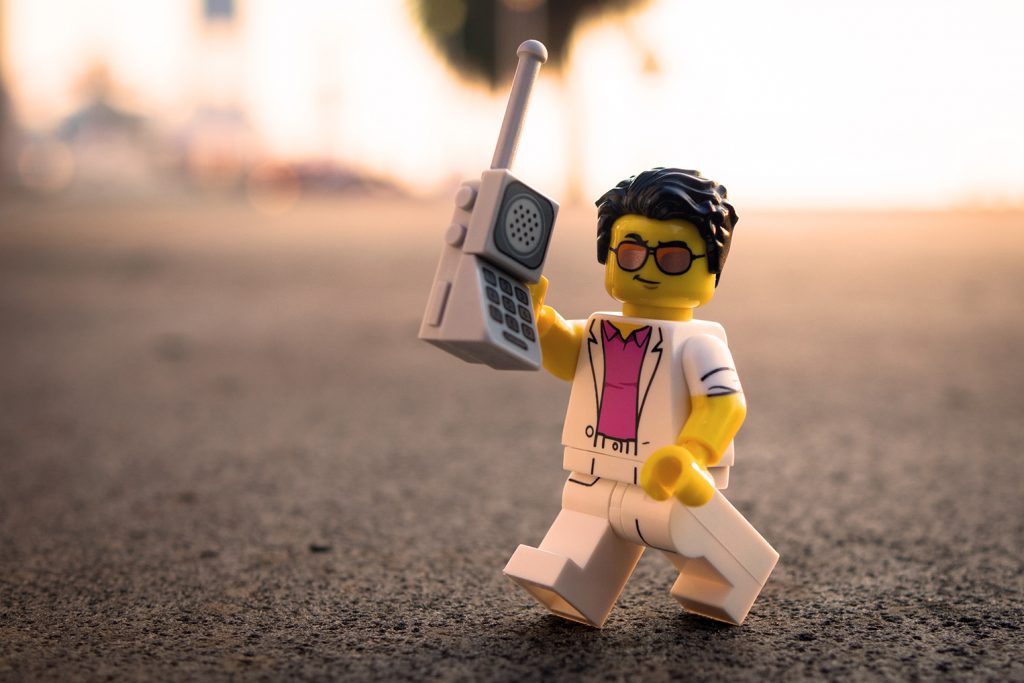 And when the 80s call, what else would they use but the iconic 80s ‘brick’ mobile phone (pun intended)? The phone is made up of a radio, a 1×1 ‘earpiece’ printed tile and a 1×1 ‘keypad’ printed slope.

Is it a coincidence that this Minifigure looks a lot like our dog Lard’s veterinarian, Kate? Probably. 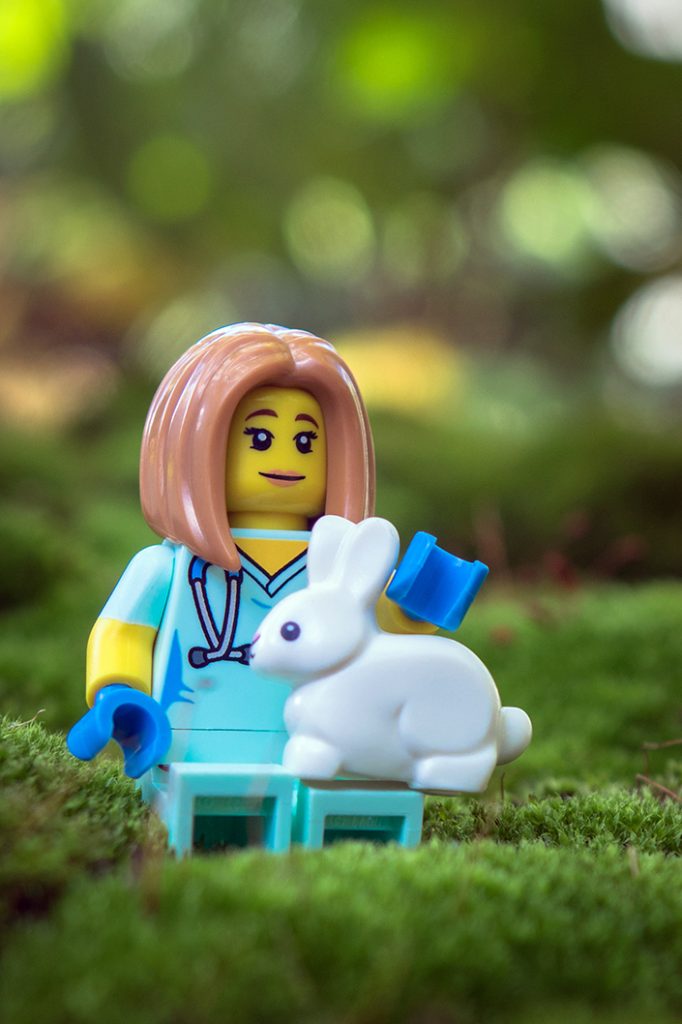 Dressed in veterinarian scrubs, a nametag with a paw print on it, latex gloves and stethoscope, this LEGO vet is ready to attend to any animal. But first patient to attend to is the new little white rabbit. Maybe it’s just a check-up before Easter? 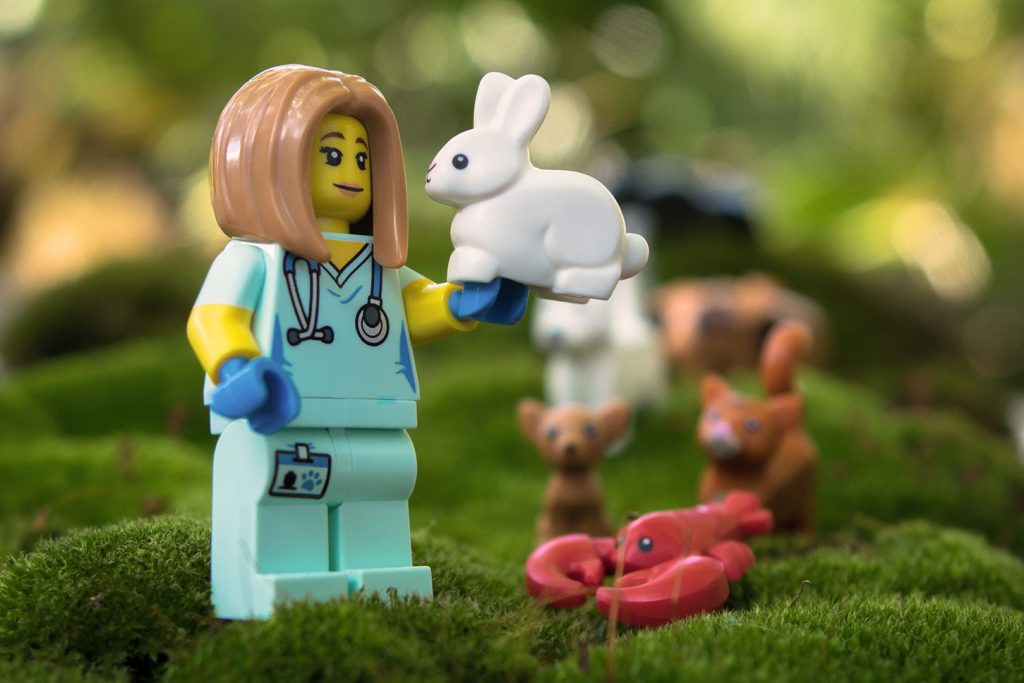 One at a time! 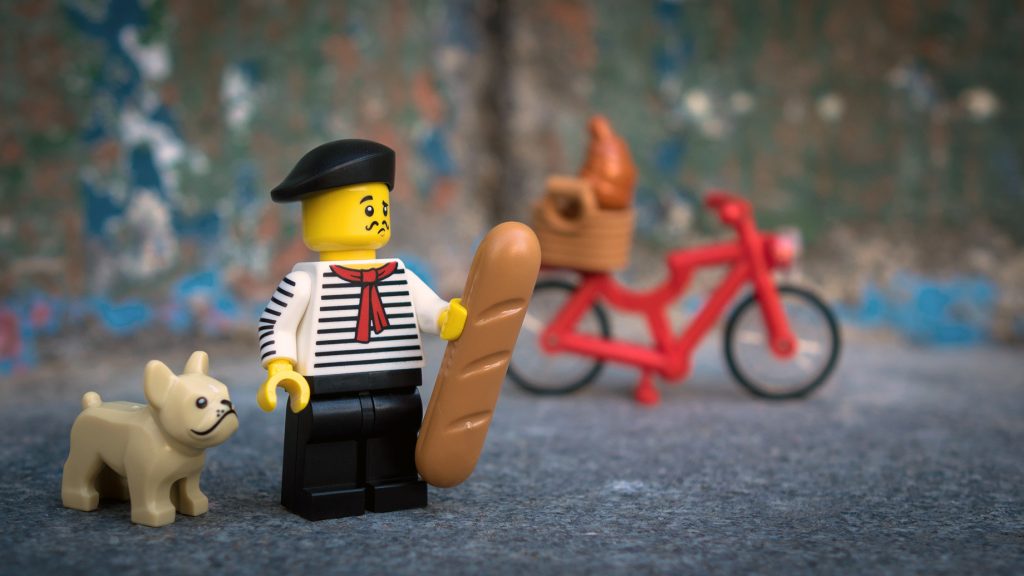 The expression on his face is brilliant, with his one raised eyebrow, pencil moustache and side-pursed mouth. His little tan French Bulldog, like all French Bulldogs, is gorgeous! 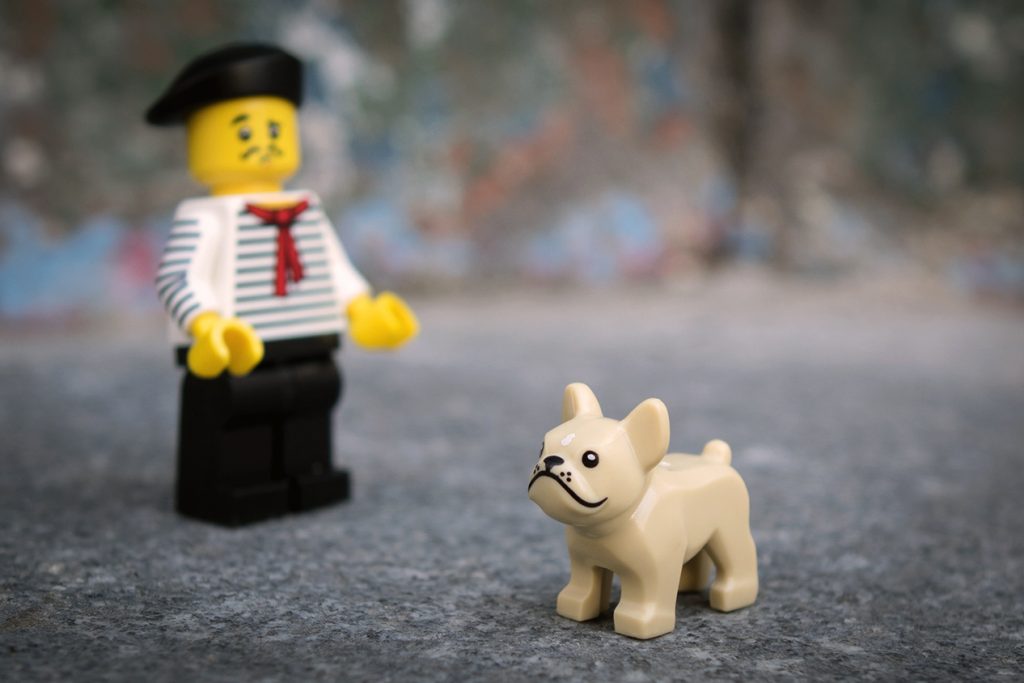 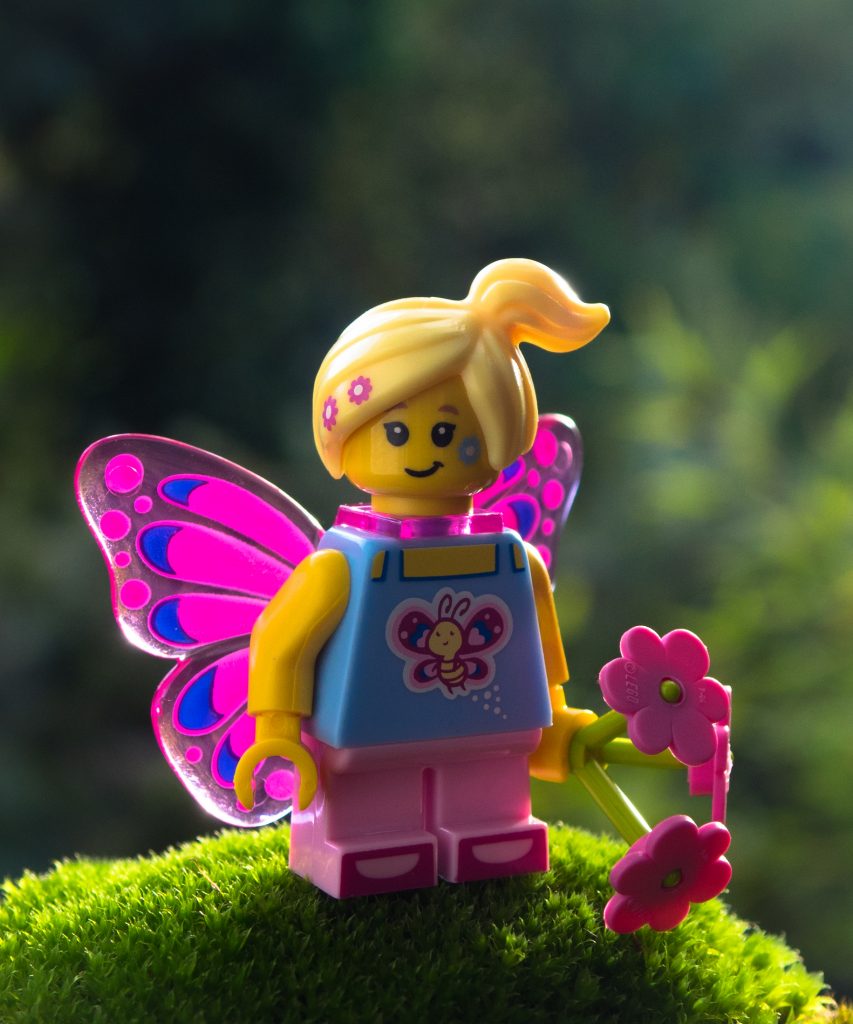 The blonde hair with two pink flowers in the fringe is similar in mould to The Lego Movie’s Wyldstyle. To compliment the pink flowers in her hair, she also has a blue flower on her left cheek. The butterfly print singlet top and pink legs with printed shoes are cute. And the trans-pink printed butterfly wings will be great to shoot against light! 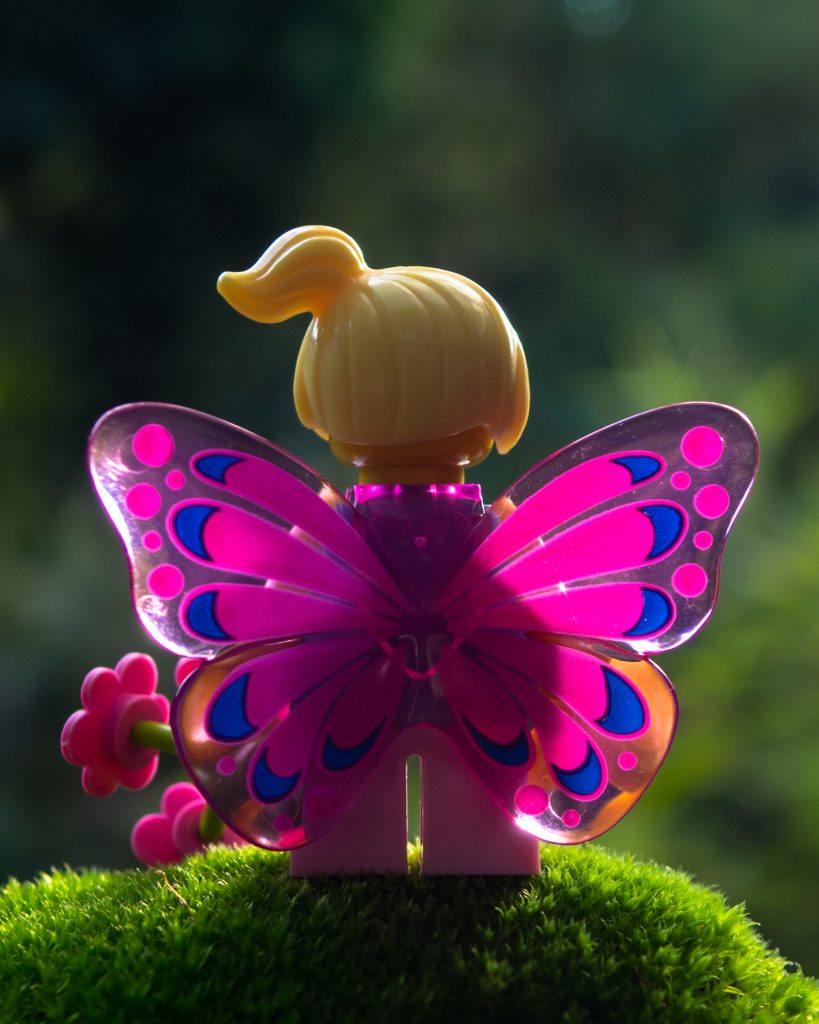 The new Lime flower stem is cool and somehow reflects the young age of the Minifigure.

Again, I feel we’ve seen a Gladiator in Series 5. This Minifigure also feels like the Series 11 Barbarian had a trip to the hairdressers and got a perm and colour treatment. 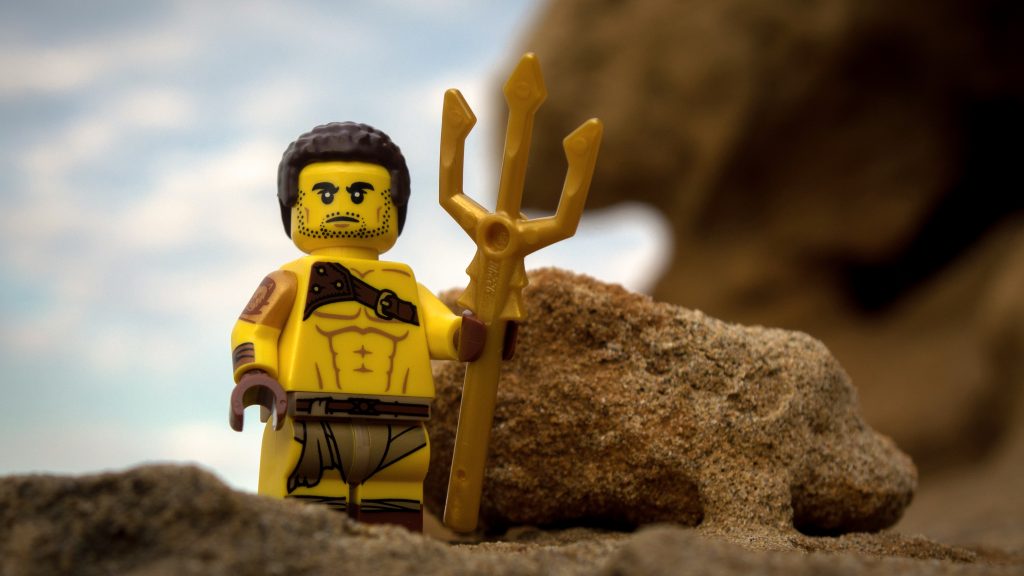 He’s less ‘battle scarred’ than the Barbarian, but torso, leg and arm printing seems very similar, apart from the golden armour emblazoned with a lion on his right shoulder.

Armed with only a trident, my money’s on the other guy when battle commences. 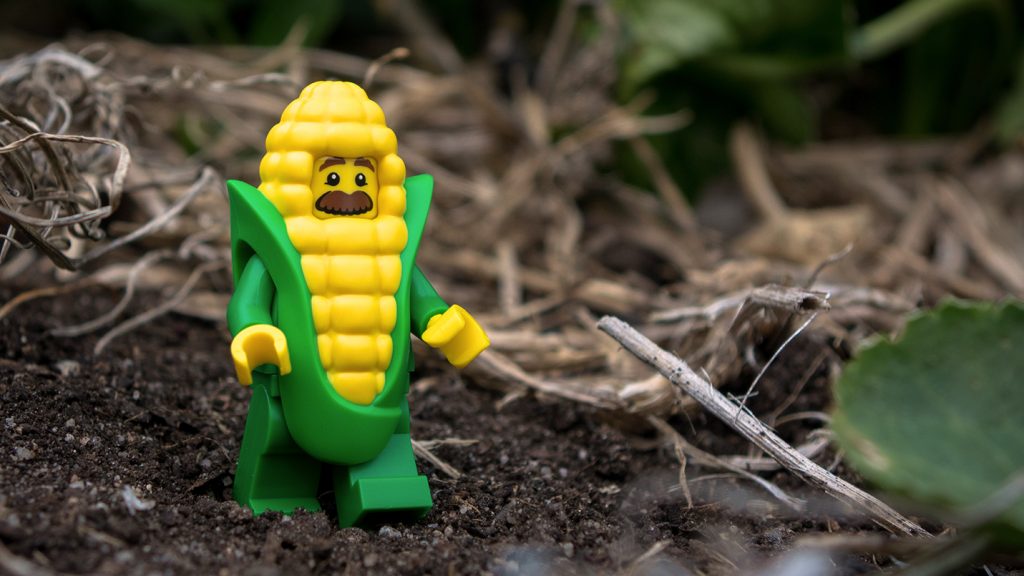 Corn on the cob, on the run!

Like the Hot Dog Man, This Minifigure is plain under the Corn Cob suit. The whimsical expression on his face is great, with his raised bushy eyebrows and his magnificent moustache. The face reminds me of Series 11 Constable, but with out the chip strap for the police helmet, which gives the head more versatility.

Who needs a chin strap for their hair? No one now!

Another stand out in this series! This Minifigure is straight out of a classic 60s space movie. 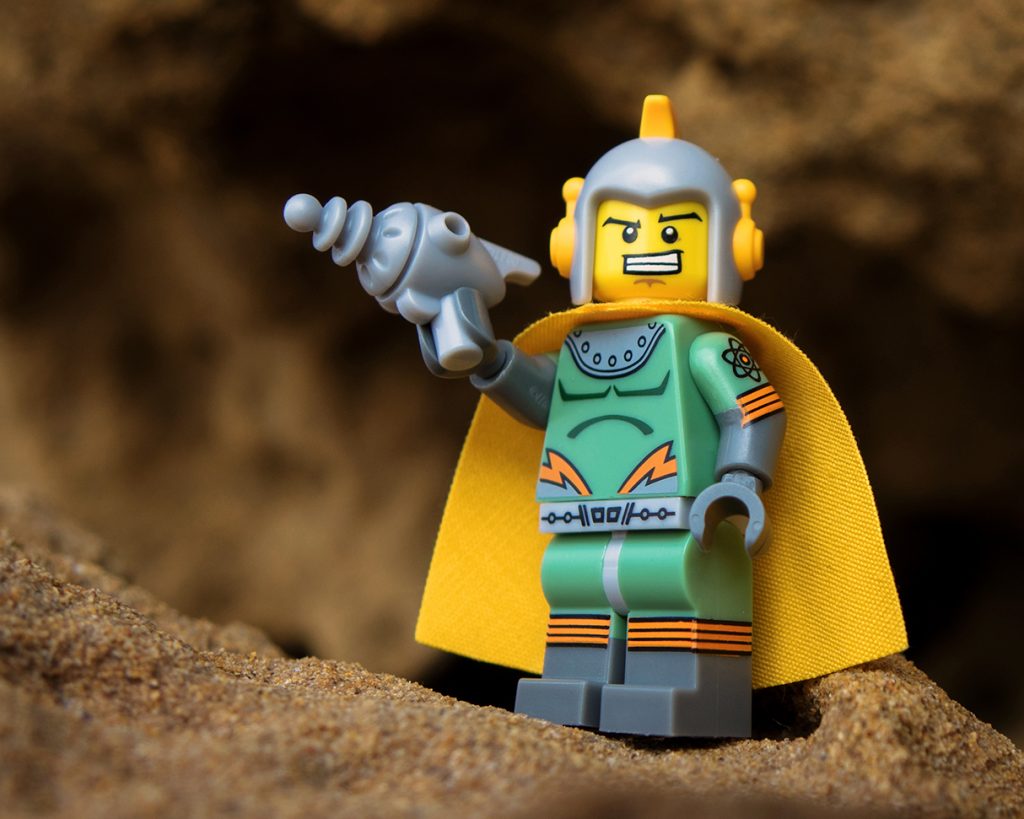 His sand green spacesuit has cool orange and grey highlights including atomic symbols on each shoulder. His super retro grey space helmet has a yellow fin on top and yellow radio antennas on each side, presumably to receive messages from back on Earth. 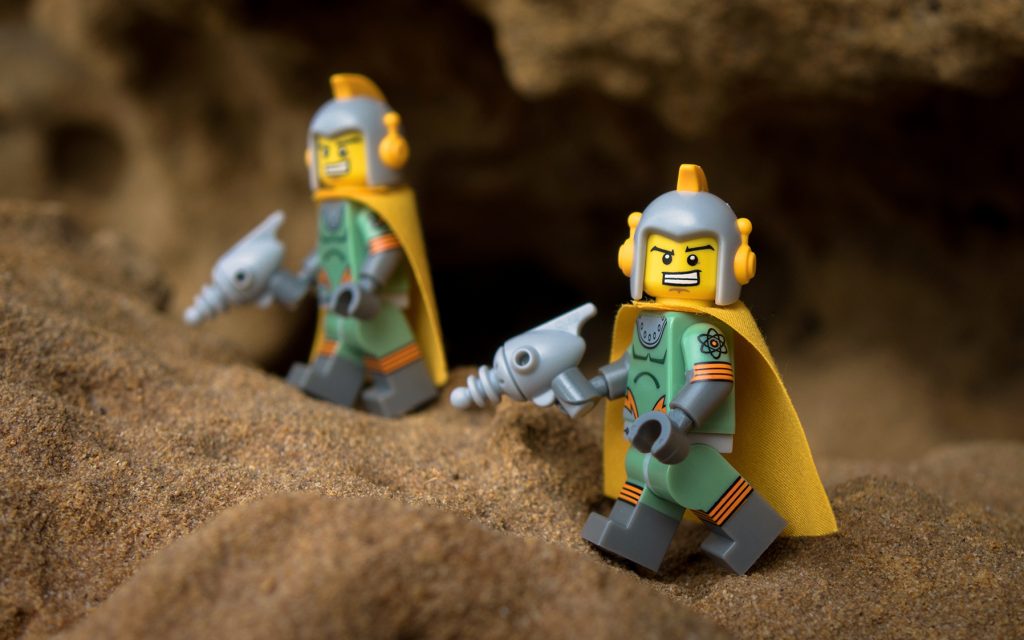 Take us to your leader!

The retro space gun is super cool! It begs to be played with, complete with the accompanying ‘Pew! Pew!” that it deserves. Or should that be “Zap! Zap!”?

We’ve seen the Fitness Instructor in Series 5 and this feels like another iteration of her. The headband, the big hair and the flashy leotard, all seem so familiar. Sure, the ‘big hair’ is new and has potential for some wonderful photographs. And it’s BIG! A lot of attention has been paid to the printing to replicate the 80s; a pink leotard with 80s geometrics patterns, over zebra print tights and light blue boots. The addition of a transparent, light blue drink bottle with H2O printed is a nice addition. 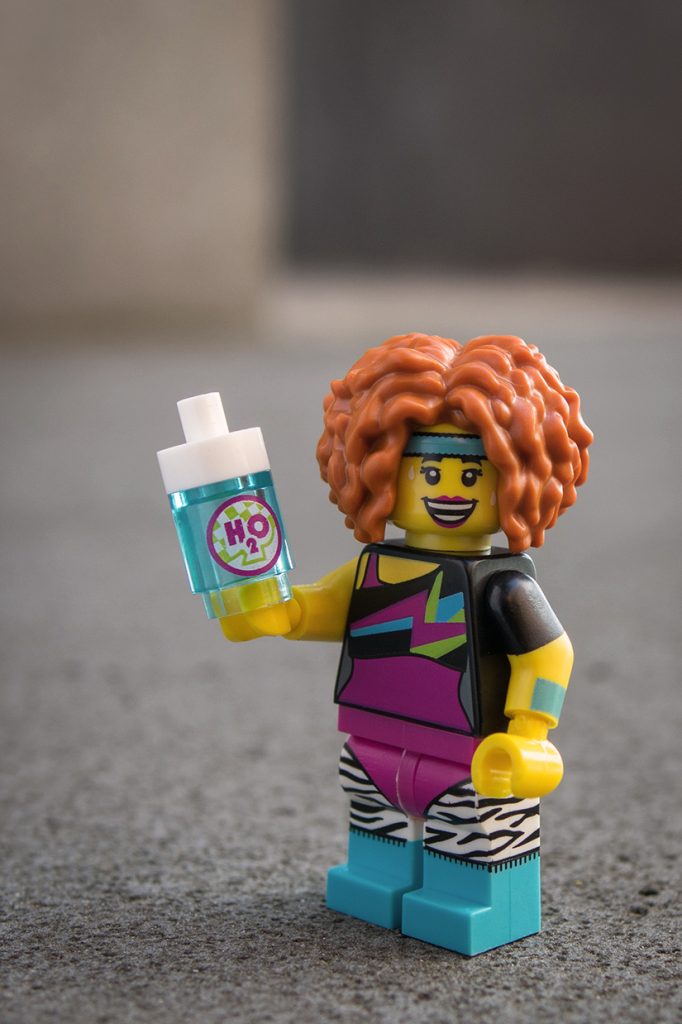 Maybe after her workout, the Yuppie will call past in his Lamborghini to take out for dinner? Somewhere pretentious and overpriced no doubt!

We met the Evil Dwarf in Series 5, however, unlike some of the others in this Series that feel like replicas of their precursors, this little guy is a wonderful compliment to his Series 5 ancestor. 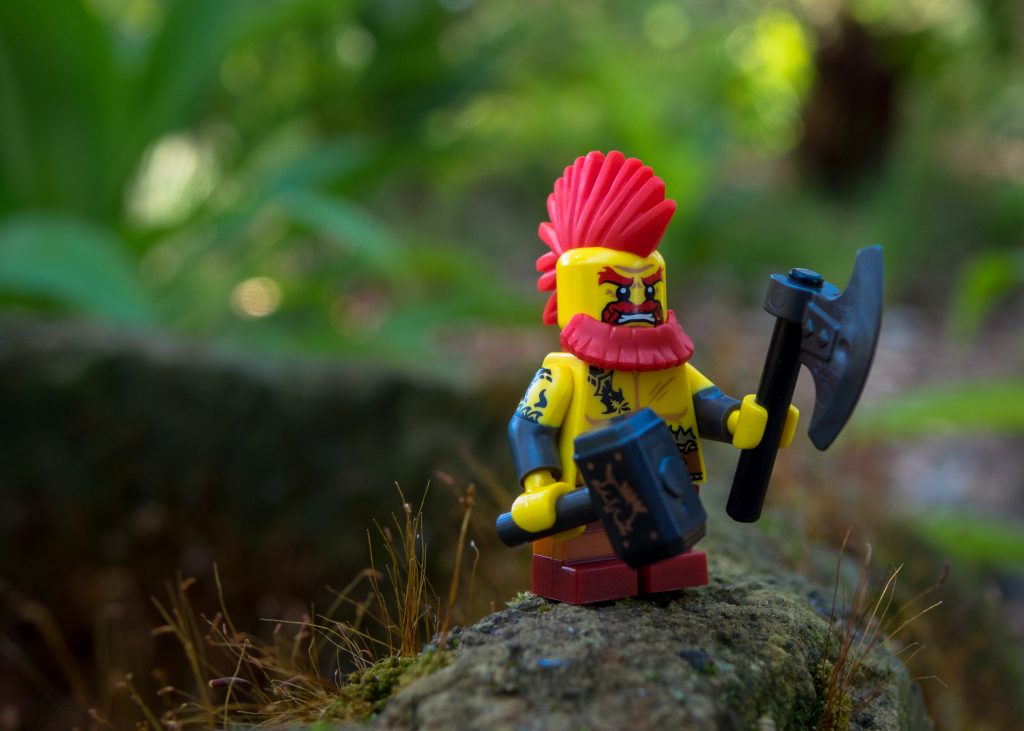 We find the Mohawk and the short beard in red for the first time, which frame his angry little face with red eyebrows and a plaited red moustache. His fur-lined belt is printed on the front and back of the torso and is emblazoned with a boar motif on the buckle. He has a tribal dragon tattoo that begins on his chest and continues onto his right arm. 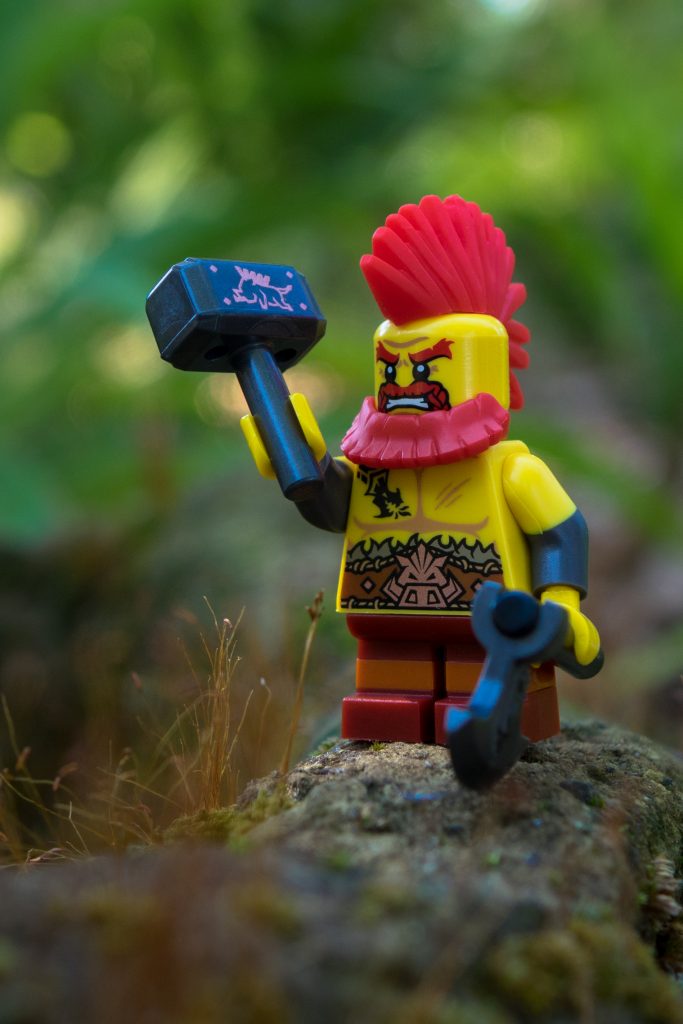 Thou Shall Not Pass

The boar motif is continued on the hammer with copper printing on both sides. Take that Thor! In case the hammer isn’t enough, he also wields an axe.

Now that’s how you tool up for a battle Roman Gladiator.

To infinity and beyond, cuteness! 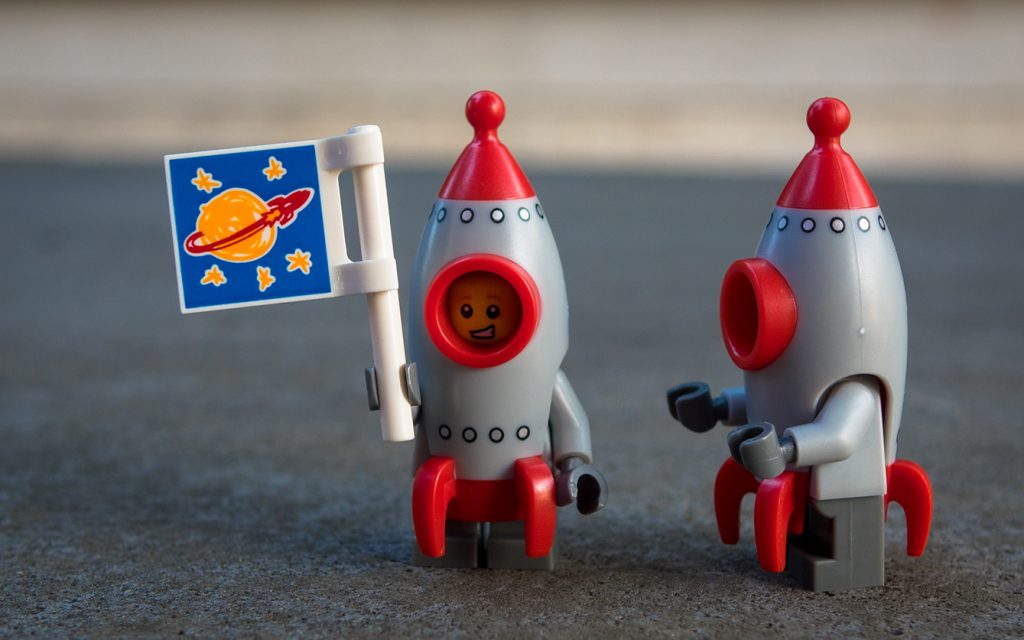 This little Rocket Boy is a standout! The retro rocket is such a cool little mould with its red-circled porthole to look out of, red nosecone, four red fins and silver rivet printing. The double-sided ‘hand drawn’ Space Classic Moon logo on the flag is wonderful. And as an added little surprise, there’s a Space Classic Moon print on the light grey torso under his rocket. 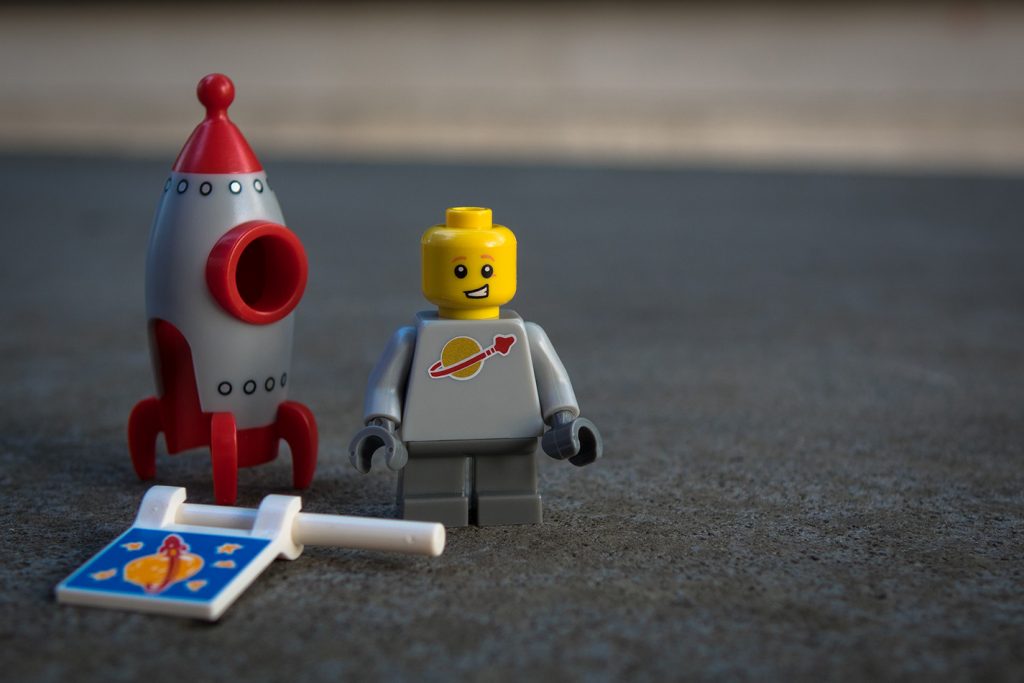 When I grow up I want to be a Classic Spaceman

Maybe he’s getting ready to travel to space when he grows up?

Opening these Minifigures, I can’t help but notice that the gender gap remains similar to previous series’, with 5 females and 10 males. And of those females, sure there’s potentially some strong role models amongst them, but I struggle to find a “full on” female character similar to the Kickboxer Girl, the Samurai, or the Battle Goddess of recent series’.

The gender gap is further accentuated once all the packs are opened and the numbers tallied. Each box contains 3 full sets of 16, plus 12 spares. The 5 female Minifigures only appear 3 times each in a box. That’s no spare female characters. Not only are they underrepresented in the series, they are limited in numbers within the box. The only others to not have spares in a box are the Professional Surfer and the Rocket boy.

OK, now that I read back my Series 17 review, it sounds like I’m overly impressed.

I know I said I instantly wanted every single ‘The LEGO Batman Movie’ Minifigure from the previous series, despite not being a “complete-ist”. Did I want every single one from this series before being sent them? No. But that’s not unusual for me. I usually stock up on the Minifigures I do want and overlook the ones I don’t.

That doesn’t mean there aren’t some wonderful Minifigures and accessories in this series. Sure, initially I feel there are some standout Minifigures, and some that leave me wanting more. And who knows, as time passes, some of the ones that haven’t initially thrilled me, might end up in high rotation on in my photos and might never make their way onto my ‘to do’ shelf of the neglected!

Now that you’ve had a chance to meet the latest additions to the Collectable Minifigure family, who are you most looking forward to? Is there a particular Minifigure in this series that you can’t wait to photograph?

Special thanks to our friends at LEGO, in particular Kim, for the opportunity to review these Minifigures before they hit the shelves this May.

PS After sitting in front of my computer for hours writing this and editing these photos with all 16 Minifigures staring back at me, my initial disenchantment with some is starting to dwindle. Maybe I should look at each new Minifigure as new, and not make comparisons to previous iterations? Without comparing these Minifigures to previous releases, they are wonderful! If I didn’t know there was a Series 5 Fitness Instructor, this Series 17 Dance Instructor would’ve impressed me greatly. I’m sorry little Dance Instructor. I’m sorry Professional Surfer and Roman Gladiator.