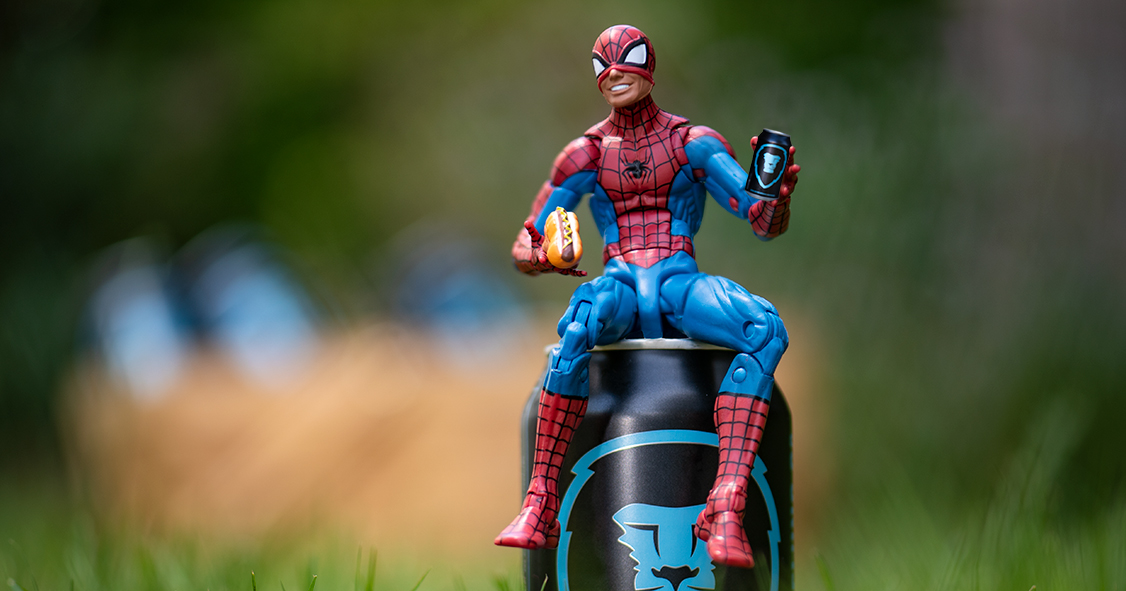 On August 1 1962, Spider-Man was introduced to the world in Amazing Fantasy #15. In honor of this anniversary, August 1 has become Spider-Man Day, when the world acknowledges the Web-Slinger’s impact on pop culture and his teaching us the important lesson behind his famous phrase: “With great power comes great responsibility.”

I love Spider-Man. He is always a superhero I identify with since he was just a normal kid and photographer like me. He also had a solid sense of humor. That being said, once Spider-Man Day became a thing, I started celebrating with photoshoots and social media posts. This year I captured some toy photos of Spider-Man’s day off enjoying a backyard BBQ with some friends and shredding the gnar on his skateboard. Happy Spider-Man Day!

Honestly I wasn’t a fan of Spider-Man until Tom Holland brought him to life in the Marvel Cinematic Universe. My exposure to the character was the super-cheesy-even-for-1978 cartoon, and the early 2000s movies. Neither drew me in.

Tom Holland made Peter Parker relatable. He made Spidey the teenager he really is, with all the personality quirks, social awkwardness and humour that goes along with it. Now Spidey is one of my favourite comic characters.

For as long as I can remember, Spider-Man has been my favorite superhero. Not because he was the strongest or had the coolest powers, but because he was introspective (like me) and had the goofiest quips and taunts during fights (unlike me).

I recently discovered that my love for Spidey goes back even further than I knew. My dad told me that when I was little, we went to a small town parade. At some point, someone dressed as Spider-Man came up to us and apparently gave me a kiss on the cheek. Later that day, I declared, “I’m never washing my face again!” I don’t remember that moment, but it tickles me that even as a child, I was smitten with Spidey.

I love those moments when he perches on a gargoyle or hangs on a spire above the city and thinks deep thoughts, wrestling with his problems. I can so relate to him being the good guy who gets rewarded for his efforts by the irrational hatred of his newspaper boss. What a slap in the face!

In my photo, my LEGO sig fig (mini-me) is hanging out with my hero, talking about photography and the meaning of life. Kindhearted soul that he is, Spidey listens to every word. Happy Spider-Man Day!

I like Spider-Man because he’s so real to me. He reminds me that we all have different gifts and the responsibility to use them for the good of the world and the betterment of others. When I was young kid, I had a Spidey keychain which I would carry around with me. It’s so cool that years later, I’m now able to tell Spidey tales from my perspective with toys!

I first came across the adventures of the Spider-Man in the early 1990s. The Iron Curtain fell and Western pop culture burst into Poland by storm. Despite the fact that the comic book market in the Polish People’s Republic (before 1989) was quite good, the invasion of American superheroes made a huge impression. And one of them was Spider-Man, a hero who was firing a spider’s web from his wrists and was walking on walls like they were streets. Wow! The fact that Peter Parker was a teenager, just like me at that time, was also a big part of my fascination with Spider-Man. I enjoyed and absorbed the work of comic artists such as Frank Miller, Todd McFarlane and Erik Larsen.

I’ve always admired those acrobatic, breakneck poses as Spider-Man flew through the canyons of New York City’s streets or hung from ceilings, watching for criminals committing crimes below. My photo is inspired by such drawings. Spider-Man is hiding in the nook of a large, neglected warehouse, which abound in NYC. And I’m pretty sure his spider sense will tingle soon!

Despite the fact that my fascination with superheroes has decreased a bit over time, I still enjoy using them when I want to take a picture. And Spider-Man’s birthday is a great occasion for that! Many happy returns, Spidey!