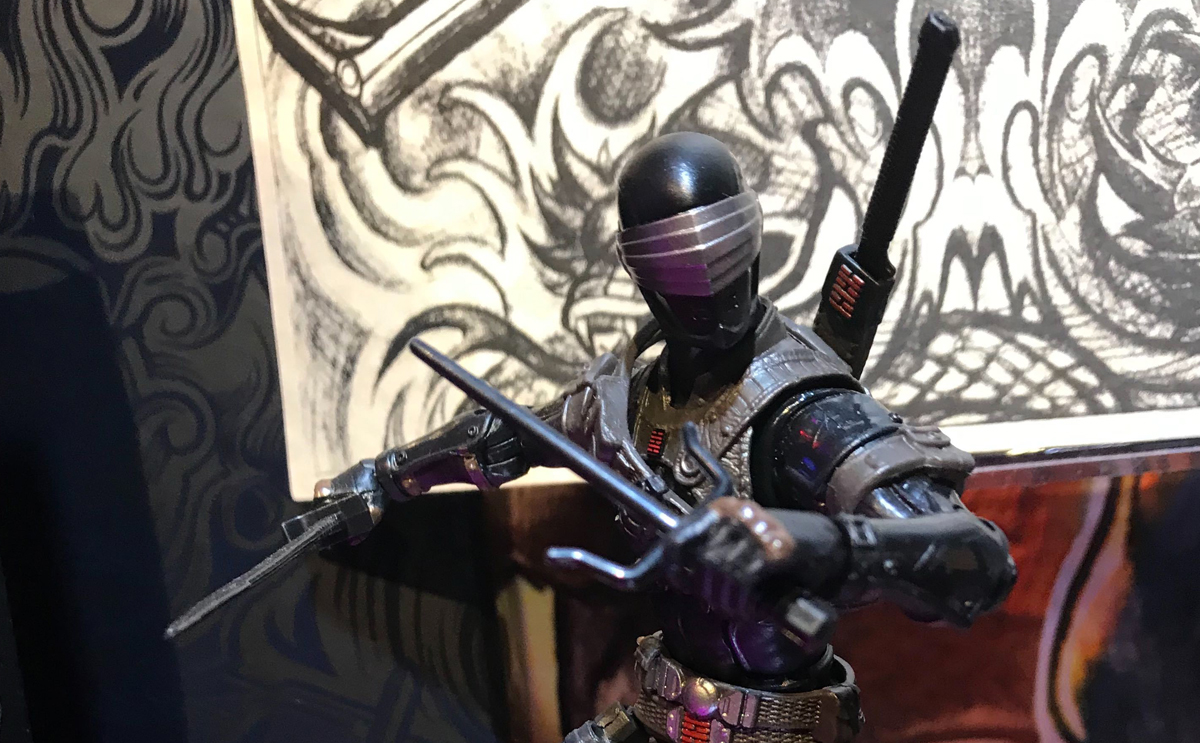 Perhaps the most recognizable character from G.I. Joe, Snake Eyes has been one of my top five favorite characters since I was a kid. As of late there has been a decent amount of hype around the mute ninja, ranging from the new Snake Eyes movie set for release in 2020, a new comic book and, of course, the just-announced 6-inch G.I. Joe Classified Series action figure from Hasbro.

I already have the 3.75” G.I. Joe 25th Anniversary Snake Eyes figure. I am very excited to get this larger, more detailed version to photograph before the Snake Eyes movie hits the big screen around October of this year.

The Snake Eyes film features actor Henry Golding (of Crazy Rich Asians) in the title role. It’s said to be an origin story that takes place before the previous two G.I. Joe movies.

Rob Liefeld the creator of Deadpool, Cable, X-Force, Domino and more has been working on a new Snake Eyes comic book. As a long time Deadpool fan and owner of the first 40 X-Force comic books, I could not be more excited for Liefeld to take on this character.

“Finally, I can share all that I’ve been drawing these last few months. Growing up, #GIJoe were the heroes of my sandbox, the champions of my shelves. These are the toys that made so many of us! Looking to restore the franchise to its former glory!” Liefeld wrote on Instagram in a caption for the above image. He also noted in the comments of his Instagram post that Snake Eyes did influence Deadpool, which is pretty neat.

This new 6-inch Snake Eyes release from Hasbro is a big one for a lot of toy photographers who have long dreamed of seeing G.I. Joe go to the 6-inch scale, as Star Wars figures did with the advent of Hasbro’s Star Wars the Black Series. Naturally, I couldn’t help myself and had to preorder the deluxe figure as soon as it was announced at this year’s Toy Fair. I am now patiently awaiting its July release.

The triumphant return of G.I. Joe begins on Hasbro Pulse with their special edition Snake Eyes figure—the first time the character has been produced in 6-inch scale. This deluxe version of the figure also comes with multiple ninja accessories and an exclusive Arashikage clan gear storage rack. A standard version will be available later with the full first wave of the G.I. Joe Classified Series (also including Scarlett, Duke and Roadblock).

Hasbro also has a bunch of really exciting New York Toy Fair preorders you can view on HasbroPulse.com.